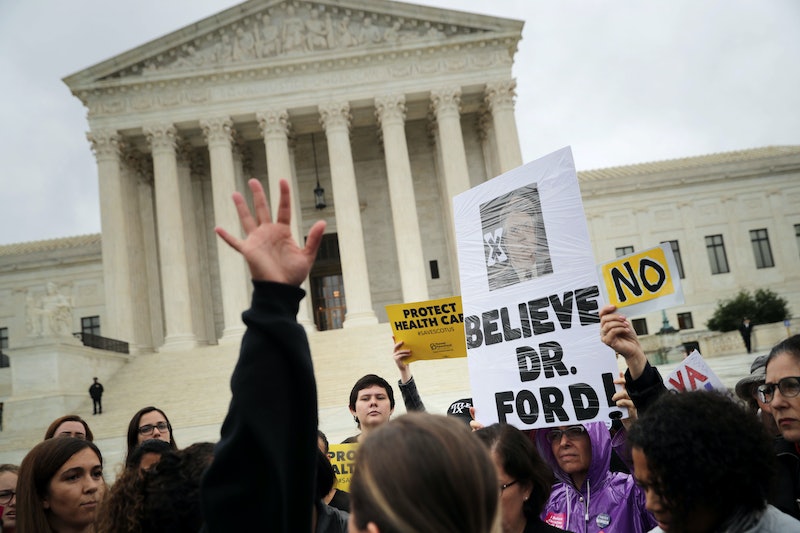 On Thursday, the first woman to accuse Supreme Court nominee Brett Kavanaugh of sexual assault (an allegation he has denied) will speak before the Senate Judiciary Committee. The details from Christine Blasey Ford's opening statement, made public in advance, are harrowing. In one particular portion, Ford describes how the alleged assault impacted what it takes for her to feel safe inside of her own home.

"I told my husband before we were married that I had experienced a sexual assault," her statement reads. Ford explains that though she had shared that information with him, she had never shared the details of the event until a May 2012 couples counseling session. She explains:

The reason this came up in counseling is that my husband and I had completed an extensive remodel of our home, and I insisted on a second front door, an idea that he and others disagreed with and could not understand. In explaining why I wanted to have a second front door, I described the assault in detail. I recall saying that the boy who assaulted me could someday be on the U.S. Supreme Court and spoke a bit about his background. My husband recalls that I named my attacker as Brett Kavanaugh.

(Kavanaugh has summarily denied Ford's allegation. "This is a completely false allegation. I have never done anything like what the accuser describes — to her or to anyone," Kavanaugh said in a statement.)

At face value, Ford's testimony is striking, but it's not the first time she had reportedly expressed similar concerns regarding her home. In a statement provided to CNN, Ford's friend Jim Gensheimer said that Ford's bedroom also needed to meet certain architectural preferences in order for her to feel secure. Per his statement:

I’ve known Christine Blasey Ford for more than eight years and have always found her to be an honest, truthful and responsible person. She is a devoted mother and teacher, and a woman of great integrity. I have no reason not to believe what she says about Brett Kavanaugh because she clearly has nothing to gain and much to lose by going public with her story. I know from things she has told me, including her need to have more than one exit door in her bedroom to prevent her from being trapped, that this event was serious enough to have a lasting impact on her life.

The anxiety surrounding whether or not she will feel "trapped" inside her bedroom or house is reflective of the types of post-traumatic stress often experienced by sexual assault survivors. Survivors of sexual assault can experience a multitude of after effects, including, according the nonprofit group Resilience, fear, distrust, vulnerability, lack of control, and phobias. With the help of time and professionals, it's true that some or all post-traumatic aftershocks can be worked through, but there's no concrete timeframe for that. Everyone is different, and everyone works through sexual assault differently.

Needless to say, Thursday's hearing before the Senate is on deck to be an historic moment for the U.S. government. Every detail from Ford's testimony will face scrutiny from Democrats and Republicans, and the analysis will undoubtedly continue for days, if not months and years. Whether it will impact Kavanaugh's confirmation remains unclear.