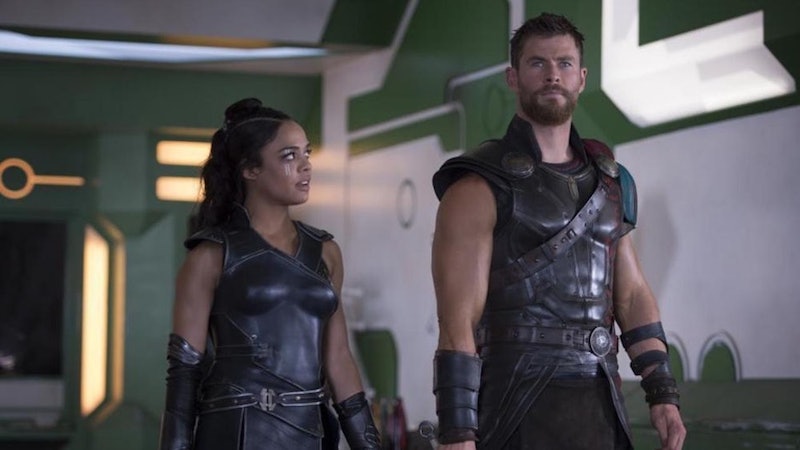 Spoilers ahead for Avengers: Endgame. Hot off the success of Avengers: Endame, directors Anthony and Joe Russo have been making the rounds to chat about the acclaimed follow-up to Avengers: Infinity War. Earlier this week, the Russo brothers revealed that 13 Reasons Why star Katherine Langford was cut from Endgame for her role as the teenage version of Tony Stark’s daughter, Morgan Stark. Well, that wasn't the only scene left on the cutting room floor. In a new interview, the directors revealed an additional Endgame scene was deleted and it involved a poorly-timed (but completely hilarious) kiss between Thor (Chris Hemsworth) and Valkyrie (Tessa Thompson).

During an interview with SiriusXM on May 6, the Russo brothers explained that an intimate moment between Thor and Valkyrie had ultimately been cut from the three hour flick. Anthony told SiriusXM about the scene,

"If you remember at the end of the movie, Thor is saying goodbye to Valkyrie and he's basically turning over Asgard to her. Since it was the ending, we wanted to keep it tight, but he had this beat with Valkryie where she puts her hand on his shoulder and he leans in for a kiss. But then she jerks back and goes 'What are you doing?!' and he goes 'Oh, I thought that touch...' and she was like, 'No, that was, like, a goodbye touch.' and it was a really funny beat, but we had to cut it."

According to Joe, the hilarious moment was completely off-the-cuff, too. He added, “Yeah, it was really cute. And [that scene] was mostly improvised by the two of them, so it was very funny."

Endgame follows the remaining Avengers (Captain America, Thor, Hulk, and Black Widow) as they figure out a way to bring back their fallen allies after the dismal events of Infinity War. After the battle of a lifetime, Thanos is finally defeated in the hands of Iron Man, and many of our heroes are left to decide what will come next for them. For Thor, that meant making the decision to not return to Asgard for his reign as king. The metaphorical crown is then passed down to Valkyrie.

Valkyrie first graced the MCU screens in the third installment of the Thor franchise, Thor: Ragnarok. In the film, the duo team up to prevent destruction of Asgard in the hands of supervillain Hela. Beyond the MCU, Hemsworth and Thompson are slated to team up once more in the upcoming film Men in Black: International, in theaters June 14. The film is a take on the ‘90s franchise as made famous by Will Smith and Tommy Lee Jones.

Men in Black: International will certainly provide a relief to the lack of Thor and Valkyrie content on the big screen. As for the Endgame deleted scene between the two, here’s to hoping Marvel fans will someday get a glimpse of the hilarious exchange. Perhaps the reel will see the light of day in the film’s upcoming packaged release? We’ll kiss to that.