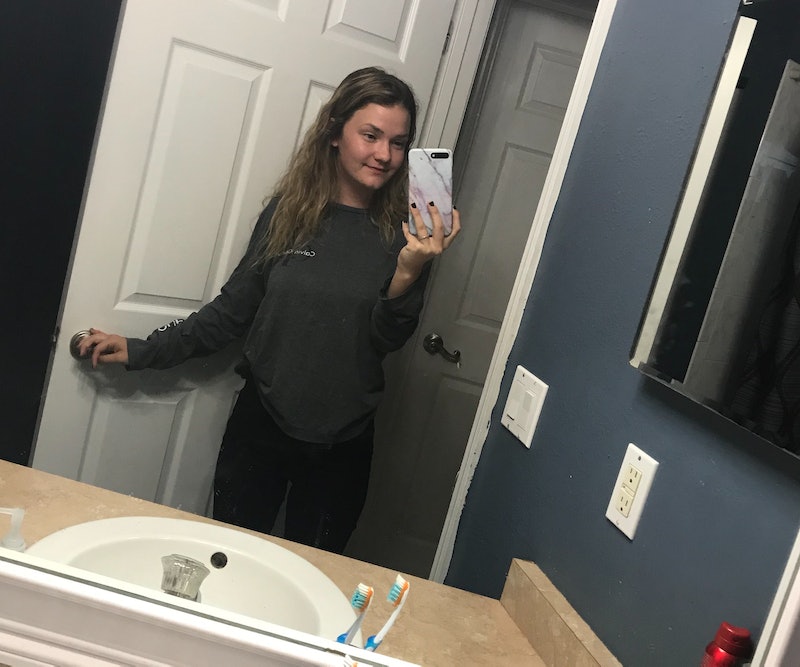 If you were told to place Band-Aids over your nipples after going braless, would you? That was the question Florida teen Liz Martinez had to answer at her Manatee County high school. Martinez's experience is another example of a dress code fail at a high school that appears to value boys' educational experiences more than the bodily autonomy of its female students.

According to Martinez, she was called out of her fifth period class on April 2 at Braden River High School after a teacher alerted administration that she was concerned Martinez was not wearing a bra. The decision to pull her from class struck Martinez as odd, as she explains to Bustle that girls are rarely pulled from their classes for dress code violations. Instead, violations are noted by administrators if violators are seen in the hall.

For Martinez, her violation apparently came because she was not wearing a bra despite being told that she was within dress code.

"The dress code... doesn’t state we HAVE to wear bras," she tells Bustle. "The principle also told my mom in a meeting that when I was in the main office waiting to go to the dean's office, she didn’t even think I was the student that they were about to speak to because I was completely within dress code. She didn’t know I was not wearing a bra until she asked me."

In an interview with The Bradenton Herald, Martinez explained that when she met with an administrator, she was told to put on a shirt beneath her own in order to bind her breasts. When this was not enough, she was sent to the school nurses office and given four Band-Aids, two for each nipple, to cover them.

Martinez did not believe she was out of the school's dress code. According to the Student Code of Conduct found on the Braden River High School website, there is no mention of what undergarments must be worn to school, only that all undergarments must be covered. Ultimately, Martinez was told that her breasts were a "distraction" by administrators, a comment that she explains made her angry and offended.

"Being told I was a distraction because I was braless made me feel like I am less of a person than the person who was momentarily distracted," she tells Bustle. "It was ridiculous, I’m still speechless and totally appalled by all of this."

Bustle reached out to the Manatee County School District (which Braden River High School is located in) regarding the incident. General Counsel Mitchell Teitelbaum issued the following statement:

This matter was brought to the attention of the Superintendent’s Office for review. It is undisputed that this matter should have been handled differently at the school level and corrective measures have been taken to prevent a reoccurrence in the way these matters will be addressed in the future. There was a violation of the School Dress Code and that it was an appropriate matter to address by the School. It is clear that the intent of school officials was to assist the student in addressing the situation. No disciplinary action was taken in relation to the student

Teitelbaum accompanied this statement with a section from the dress code that reads:

You are expected to dress appropriately for school and for the business of learning with proper attention given to personal cleanliness, grooming, and neatness. If your personal attire or grooming distracts the attention of other students or teachers from their school work, disrupts educational activities and processes of the school, or is a potential safety hazard, you will be required to make the necessary alterations to such attire or grooming before entering the classroom or you may be assigned to In-School Suspension (ISS). If you fail to meet the minimum acceptable standards of cleanliness, neatness, proper fit, safety and decency as determined by the principal or designee and as specified in the District Code of Student Conduct, you will be subject to appropriate disciplinary measures. You are additionally prohibited from wearing clothes that expose underwear or body parts in an indecent or vulgar manner or attire that disrupts the orderly learning environment.

While the district appears to be pointing back to the Code of Conduct as justification for pulling Martinez from class, the vague language used in the introduction to the specifics of the dress code lead to questions about not simply what constitutes "decency," but what is considered "indecent" and "vulgar."

For Martinez, though, the incident was never truly about the dress code. Instead, she believes it has much more to do with policing women's bodies while chalking up distractions to a "boys will be boys" attitude that allows young men to sexualize women.

"It was never about dress code, but I would like to see some sort of education to young students about not sexualizing the human body," she tells Bustle. "Dress codes in general for girls put boys at an advantage because they are majority of the time based on not distracting boys... We, as girls, are told all the time how we should act, behave, dress, and think. We do not have to wear a bra if we do not want to, and we should be respected from everybody around us, if we choose not to do so."

Martinez is far from the first to be be targeted for vague dress code violations. In April of last year, Rosey Abuabara, mother of Texas high school Sophia, refused to bring her daughter a change of clothes after she was told her dress was too short despite Abuabara measuring the hem's length. Then, there's Cameron Boland who, in 2015, was denied a position on her National Honor Society officer's board because of displaying her shoulders during the ceremony. And there are many, many more.

By calling breasts, shoulders, and legs "distractions," experts say dress codes reinforce the idea that boys have no control over their sexuality, and suggest the responsibility falls to women not capture unwanted attention. Martinez's story is just the latest in a sea of girls saying their bodies aren't distractions — and that dress codes need to change.