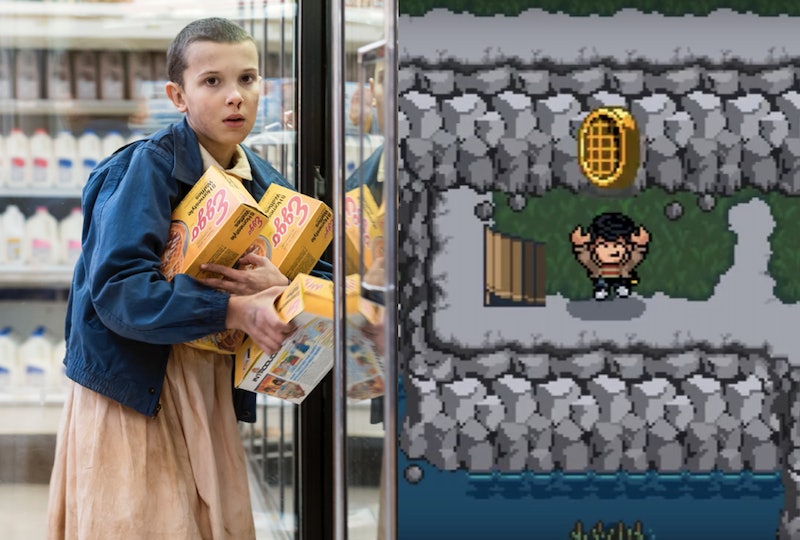 Listen, folks. There's no calm way to put this except to say that you need to immediately drop that box of Eggos and free up the next few hours of your life, because Netflix released a Stranger Things game for your phone. And it's basically the best thing in the world since Season 1 of Stranger Things, OK? It's available for download from the IOS App Store and Google Play, but that's not even the best part — Stranger Things: The Game is completely and utterly free, including no pesky prompts for in-app purchases. It's also a glorious slice of pixelated retro arcade heaven, the likes of which Will, Dustin, Lucas, and Mike would all get very excited about.

Featuring seven playable characters, six dungeons to explore, and more than 30 quests to complete, Stranger Things: The Game has plenty to wile away the hours until the second season of the show returns on Netlflix on Oct. 27. The game also provides a fun way for viewers to recap the events of Season 1 as players are taken through familiar locations such as Mirkwood Forest, Jim Hopper's Home, and Hawkins Lab fighting a variety of foes and collecting coins (of course) and most importantly, Eggos.

Easy to play, it's a fun scrolling platform game that will immediately take players back to their primitive '80s consoles. However, '90s kids will also get a kick out of being reminded of its similarity to some of their fave Game Boy classics.

Not missing a single beat in their nod to retro gaming, Stranger Things: The Game even has two different playing difficulties to choose from. Normal, which is the one that even the least gaming-literate among us will be able to excel at. And Classic, which is described in the game as being "for experienced players only. It's like 1984 hard." Oh Netflix, you joker.

The whole thing is a dream for fans who have been producing their own fan-made visions of what a retro Stranger Things game would look like ever since the Netflix show first premiered. There's been CineFix's 8-Bit Cinema adaptation of the show, a 16-bit reimagining of some of the show's most standout scenes, and a mock-up of what an NES game of the show would resemble. YouTube is stacked with fan-made tributes to Stranger Things with retro gaming twists.

And it's completely understandable. While the retro gaming element lends itself to a show full of retro throwbacks to '80s pop culture, the plotlines, locations, characters, and hell, even the synth soundtrack, all work well with retro gaming too. As far as inciting events go, the disappearance (and necessary retrieval) of Will Byers sits well among games like Super Mario Bros. and Legend Of Zelda wherein someone very important (usually a princess, but whatever) is captured and our heroes have to venture forth to save them.

The game also plays up to the tropes of TV show and movie tie-ins from that particular era where small details from the property were lovingly, if awkwardly, translated to game form. In computer games like Ghostbusters ii, or the infuriatingly difficult Friday The 13th game (both for the NES), the basic storylines of both movies were adhered to, but embellished upon in weird and wonderful ways. And Stranger Things: The Game does exactly the same.

You'll see, for instance, Hopper punching just about everyone he meets, Nancy swinging a whole bag of bats to defeat her enemies, and Lucas using his Wrist Rocket to nail things from a distance. All of these actions help solve puzzles, check off achievements, and complete the VHS library of the game (and, frankly, fans' hearts).

Basically, this is all one major heads-up that whatever plans you've made for the next day or so, you may have to blow off. Or, at the very least, commit to being utterly distracted. Because we all know that this game is it now, and we'll all be obsessing over it like Joyce with a set of Christmas lights until Oct. 27 finally arrives. See you in the (8-bit) Upside Down, folks.

More like this
Caleb McLaughlin Details Racism From 'Stranger Things' Fans
By Radhika Menon
The 50 Most Powerful Characters In The Marvel Universe, Ranked
By Johnny Brayson and Nola Pfau
A New Scooby-Doo Movie Confirmed Velma Is Gay & Twitter Is Pumped
By Radhika Menon
10 Stranger Things-Inspired Halloween Costumes For True Fans
By Emma Carey
Get Even More From Bustle — Sign Up For The Newsletter