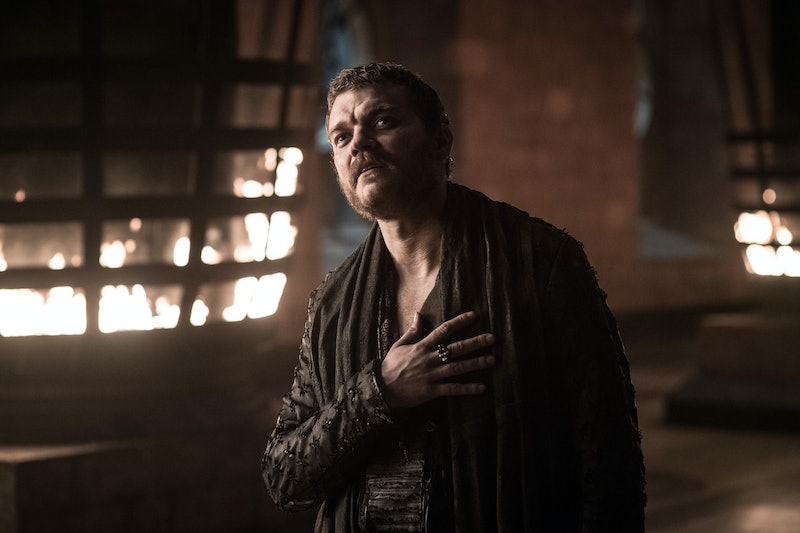 The Game of Thrones finale isn't the only big event going on this weekend, Europe's annual Eurovision song contest is also taking the world by storm. These two vastly different pop culture phenoms seemed to be in their own orbits until fans on Twitter spotted a Game of Thrones and Eurovision crossover for the ages. Per Digital Spy, a Eurovision clip package from past competitions featured none other than Euron Greyjoy himself — and the internet promptly pledged their allegiance to the Iron Islands in response.

It turns out that actor Pilou Asbæk co-hosted the 2014 Eurovision final alongside Nikolaj Koppel and Lise Rønne when it was held in his home country of Denmark. This was long before he was cast as a dragon-slaying pirate on the hit HBO show, which only makes the unexpected crossover all the more fun. On the show, Euron is... well, he's a total jerk. But if his social media presence is any indication, Asbæk is a delight in real life. He loves joking with his fans, and he seemed to be thrilled that people were discovering his time in the Eurovision spotlight.

On Saturday, May 18, the actor shared a post about his Eurovision days with his fans on Instagram, which included a message about how much he loves the event and would be game to host again if Denmark gets another shot at being the host country. He wrote,

"Once...in a galaxy far far away...I hosted #eurovisionsongcontest 2014 and It was bloody awesome!!! A party I will never forget because of the best fans in the world....Miss you guys @nikolajkoppel and Lise Rønne ❤️ if #denmark EVER win again... I’m game...are you? 😉👊🏻 #eurovision2019 #photospam #flashback #memories #❤️ #celebratemusic #europe #together and Australia 😂😘🤷🏼‍♂️ #anyonefromChinawatching? #funfact I got more and more drunk as the night progressed. Free beer and music. Loved it."

Asbæk was given several opportunities to sing during the competition, including an appearance in a track titled "12 Point Song." During the bit, the actor sang a solo, danced, and quizzed listeners on trivia about China. The most memorable moment from his hosting days, however, was a funny moment shared with Graham Norton during the Grand Final of the show.

As much as hosting Eurovision delighted Asbæk, seeing Euron Greyjoy sing and dance and tease Norton is turning out to be the balm that Twitter's soul needs in the lead up to the finale. Many fans took to social media to share their reactions to Asbæk's surprising former career as host.

In retrospect, his stylish outfits should have given him away.

This Fan Supported This GoT Plot Twist

Hey, there have been some weird twists this season, and this one makes about as much sense as the rest.

Some Wanted A GoT And Eurovision Crossover Moment

Eurovision, as with Game of Thrones, wrapped up this weekend. On May 18, the Netherlands won the competition, with singer Duncan Laurence scoring 492 points for the county. Russia and Italy came in second. On Sunday, world's away in Westeros, fans will finally find out who takes the Iron Throne in the Game of Thrones finale. Euron Greyjoy will not be victorious — he died in last week's episode, after a battle with Jaime Lannister — but he will always be the most fabulous pirate in the Seven Kingdoms.

Of course, Euron was never exactly the GoT fandom's favorite character. But while fans may not have wanted to see him take the throne, if he considered a career hosting international singing competitions, everyone would have been on board.