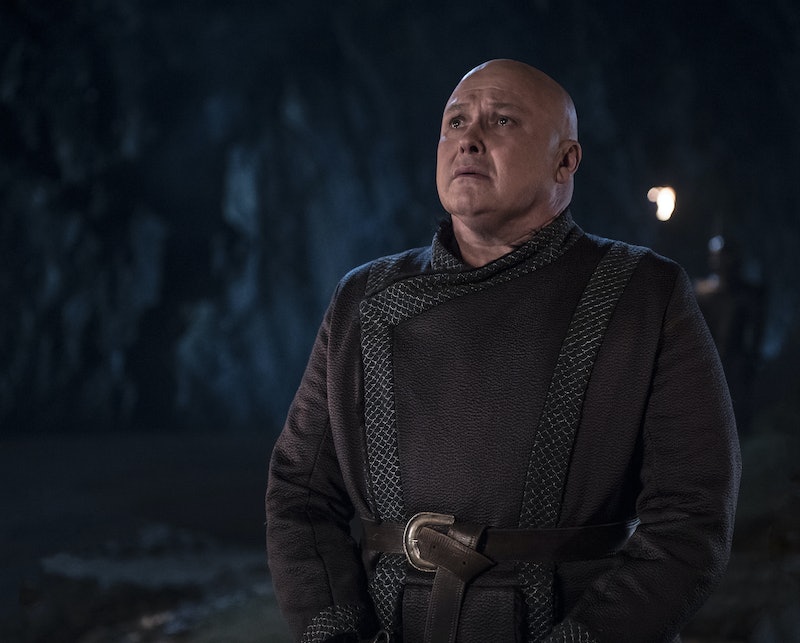 Spoilers for Game Of Thrones Season 8. Daenerys might have killed Varys, but that doesn't mean she saved herself. A new Game Of Thrones fan theory about Varys' rings hints that he could still take out Dany from the great beyond, according to BuzzFeed. All we can say is, the Mother of Dragons might want to think twice before toasting to her recent victory.

In Episode 5, "The Bells," Varys plots to kill Dany, who he believes is not the right person to lead. And oh boy, was he unfortunately right. Varys planned to take her out with a bit of poison as we learn when one of his little birds, Martha, lets him know Daenerys hasn't been eating. "We'll try again at supper," he tells her.

Unfortunately, Varys' after dinner surprise was that Daenerys was going to execute him for treason. However, before Drogon did the deed, viewers see Varys very methodically take off his rings. We even get a long closeup shot of him removing his jeweled pinkie ring and placing it in a cup on his desk. Now fans think that Varys' rings could be the key to how Daenerys dies in the finale. And there's evidence to support this theory.

Poison jewelry is very much a thing on Game Of Thrones. In fact, it's how Joffrey died way back in Season 4 when Dany was about to become the Breaker of Chains and was not yet the Mad Queen.

Olenna Tyrell stole a jewel out of the necklace Sansa was wearing at what would become known as the Purple Wedding. That jewel held a poison vile, which Olenna put in Joffrey's drink and well, the rest is history.

Now, Varys couldn't have expected to be around for long after telling Tyrion he thought they should overthrow Dany and enlist Jon Snow to be the king. And knowing that it's hard to believe Varys didn't lay out a contingency plan for the Whisperer network incase of emergency. It's why him ever so gently removing his rings and putting them in an easily accessible place before going to meet with Dany feels like it could be part of a bigger plan.

Now, one of his little birds could be prepared to steal those rings out of his room and spike Daenerys' next meal with some delicious poison. Or, maybe Tyrion could those poison rings to kill Daenerys. After what Daenerys did to King's Landing, it's hard to believe Tyrion won't be out for revenge. Perhaps, Varys set Tyrion up to take matters into his own hands if Dany went mad.

This is not to say poison will work on the Mother of Dragons. She is rather paranoid right now about everything and she certainly doesn't trust those around her after hearing they were trying to overthrow her. She's already threatened her once trusted advisor Tyrion's life. Dany might not be eating because she knows that someone might be trying to poison her.

In fact, Redditor hmmmmletmethink wrote that Daenerys' madness was actually caused by Varys. They believe Varys has been poisoning her in hopes that she would go mad and prove his assumptions true. They believe Varys was planning to give her one last lethal dose before he was killed. This Redditor even thinks Varys could have done the same to her dad, the original Mad King, who he was also an advisor to.

It's clear none of us know who to trust as Game Of Thrones officially comes to a close. It's probably why everyone, not just Daenerys, might want to prepare their own meals from here on out.