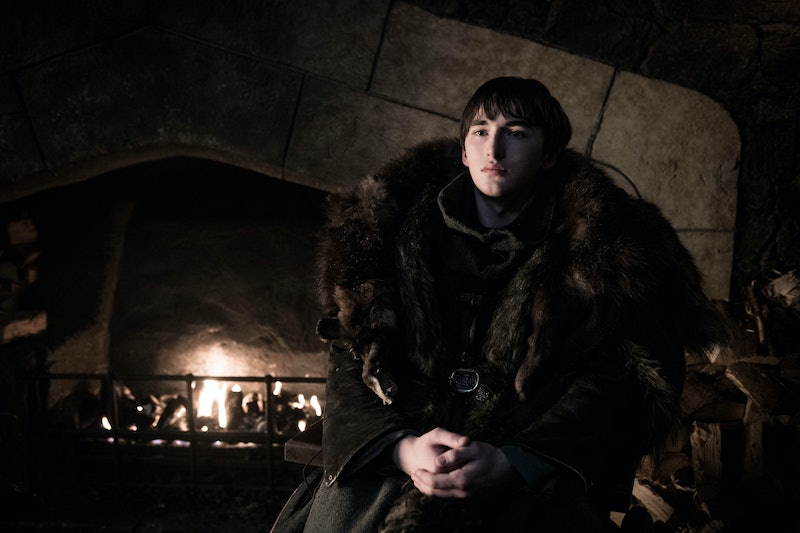 This article contains spoilers for the Game Of Thrones finale. After years of predictions and debates about who would eventually sit on the Iron Throne and rule the Seven Kingdoms, fans were thrown a curveball in the finale, as Bran was declared King and Sansa was allowed to rule the North as an independent kingdom. But with fans searching everywhere for details leading up to the show's outcome, a Game of Thrones ending theory emerged that claims that the finale was actually teased in a Season 1 poster.

According to Time, fans began speculating on Twitter that clues about Bran (Isaac Hempstead-Wright)'s eventual role as the Lord of the Six Kingdoms were visible from the very start of the show. Ahead of the Game of Thrones premiere on April 17, 2011, HBO released a promotional poster that featured Sean Bean as Ned Stark, sitting on the Iron Throne. Resting on the arm of the Throne appears to be a raven, while at the bottom of the poster, the show's most popular phrase is paraphrased: "You win or you die."

Now that Bran — who is also the Three-Eyed Raven — is King of Westeros, some fans think that having a raven perched on the throne next to Ned is proof that Game of Thrones has been working towards this ending the whole time. As Twitter user @thommybell explained, "Raven + Ned Stark on the Iron Throne = Bran Stark. It was in front of us THE WHOLE TIME."

While it might seem a little farfetched to think that the Game of Thrones creative team has been hinting about Bran's ascent to the Throne since before the show even premiered, it's worth considering that author George R. R. Martin originally pitched the Song of Ice & Fire series as a trilogy of books, with Bran as one of the central characters. In fact, in his original letter publishers, Martin mentioned that Bran was always intended to make it to the bitter end of the series.

However, the actual books turned out to be incredibly different than Martin's original vision, which included a love triangle between Jon, Arya, and Tyrion, and Jaime Lannister (Nikolaj Coster-Waldau) inheriting the Iron Throne from Joffrey after killing everyone in his path. Clearly some major changes were made in the process of writing the books and the TV show.

What makes the Season 1 foreshadowing even more unlikely is the fact that creators David Benioff and D.B. Weiss didn't talk about the series' ending with Martin until 2013, when the show began to run out of book material to base storylines on. “Last year we went out to Santa Fe for a week to sit down with [Martin] and just talk through where things are going, because we don’t know if we are going to catch up and where exactly that would be," Benioff told Vanity Fair in 2014.

"If you know the ending, then you can lay the groundwork for it. And so we want to know how everything ends. We want to be able to set things up. So we just sat down with him and literally went through every character," he explained. While it would be a nice way to bring the entire series full circle, those quotes don't seem to support the idea that Benioff and Weiss were hinting at the ending from day one.

Besides, having Bran become the new ruler of the Six Kingdoms gave a show known for twists and turns one last shocker — in fact, Hempstead-Wright himself thought the ending was a joke when he first read it. "I had to get up and pace around the room," he confessed to Entertainment Weekly. "I genuinely thought it was a joke script and that [Benioff and Weiss] sent to everyone a script with their own character ends up on the Iron Throne."

Whether or not HBO has been dropping hints about the ending since before the show premiered, it does give fans an appropriately full-circle answer to the question of who will win the titular game of thrones.