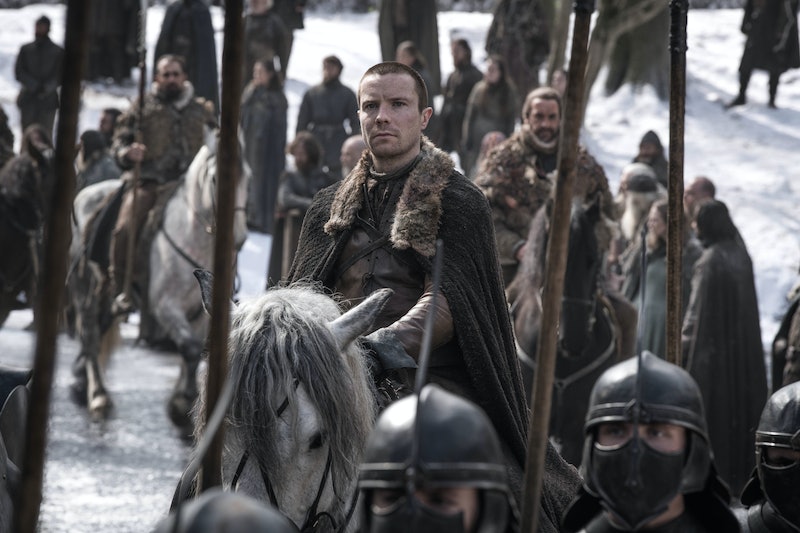 Since Season 8 began, Game of Thrones has been driving home the idea that history is doomed to repeat itself. Now one intrepid Reddit user is theorizing that this means the series will end with a new version of Robert's Rebellion. The players will be different, but the story will be more or less the same, ensuring that the wheel Daenerys once wanted so desperately to break just keeps right on turning.

Just in case you need a refresher, Robert's Rebellion is what kicks off the events of the show, including the mystery surrounding Jon Snow's parentage. Roughly 18 years before the series begins, Daenerys' father, Mad King Aerys, grew increasingly paranoid and began threatening to "burn them all." Meanwhile, his son Rhaegar appeared to kidnap Lyanna Stark (they actually fled to Dorne where they could marry before the birth of Jon), which sent her betrothed Robert Baratheon into a rage. The Starks and Baratheons united after the Mad King burned Ned Stark's father and brother alive, and led much of the Seven Kingdoms in open rebellion against the Targaryens. Ultimately, Jaime Lannister, who was sworn to protect the king as a member of the Kingsguard, murdered the Mad King and paved the way for Robert to take the Iron Throne.

Basically, the Starks and Baratheons rallied together to end the Targaryen rule with a somewhat surprise assist from the Lannisters. According to Reddit user nzjamesk, the final episode will see all of this happening again as Daenerys goes after Sansa Stark, a move that will unite the Starks and the last remaining (and newly legitimized) Baratheon, Gendry, as they band together to stop Daenerys. But just as Jaime is the one who ultimately kills the king, Tyrion Lannister will be the one to take out the Dragon Queen.

Granted, that's quite a lot of story to get through in a single hour, but the broad strokes of the theory feel plausible. From Jaime renouncing his redemption arc in order to return to Cersei to the season beginning with the White Walker's mysterious circular pattern first seen in the pilot, Season 8 has been a circle in terms of storytelling. The characters left on the board are poised to repeat the sins of their fathers as they continue to play the game of thrones.

For that reason, it's easy to imagine any one of the remaining Starks — Jon, Arya, or Sansa — being kidnapped or executed by Daenerys, prompting the others to rally the North against their new Mad Queen. As for Gendry, Daenerys may have legitimized him, but his loyalty is to Jon and Arya. If they call for his help, there's no doubt he'll come. But as they fight with the Mother of Dragons' army, Tyrion may find himself as the person closest to Daenerys — and now that Jaime has seemingly died in her rampage, he has all the more reason to literally stab her in the back.

This could all lead to Gendry sitting on the Iron Throne when the curtain falls. After all, Jon's made it abundantly clear that he has no interest in ruling the Seven Kingdoms. And without Jon in the picture, Gendry makes the most sense, as the line of succession would once again run through the Baratheons.

But Gendry could be just as ill-equipped to rule as his father was. He's a warrior, but he's no lord. Furthermore, Arya turned down his proposal of marriage, meaning he could find himself locked in a political alliance without love, like Robert and Cersei. And so he would be a weak king with enemies just waiting to overthrow him... and, well, you get the picture. To borrow a phrase popularized by another great genre show, "all of this has happened before, and all of this will happen again."

There's something deeply sad about the idea that Jon, Gendry, Daenerys, and Tyrion could all follow in the footsteps of their fathers, having truly learned nothing from their mistakes. But given the many, many callbacks to Season 1, a truncated version of Robert's Rebellion 2.0 playing out almost feels inevitable at this point.

More like this
This Episode 6 Moment Foreshadows Viserys' Fate On 'House Of The Dragon'
By Grace Wehniainen
You’ll Definitely Recognise Both Of Ty Tennant’s Parents
By Maxine Harrison
'House Of The Dragon’s Theo Nate Is A “Massive” 'GoT' Fan
By Maxine Harrison
Nicola Coughlan Shared A Lady Whistledown Excerpt From ‘Bridgerton’ Season 3
By Grace Wehniainen, Alyssa Lapid and Sam Ramsden
Get Even More From Bustle — Sign Up For The Newsletter