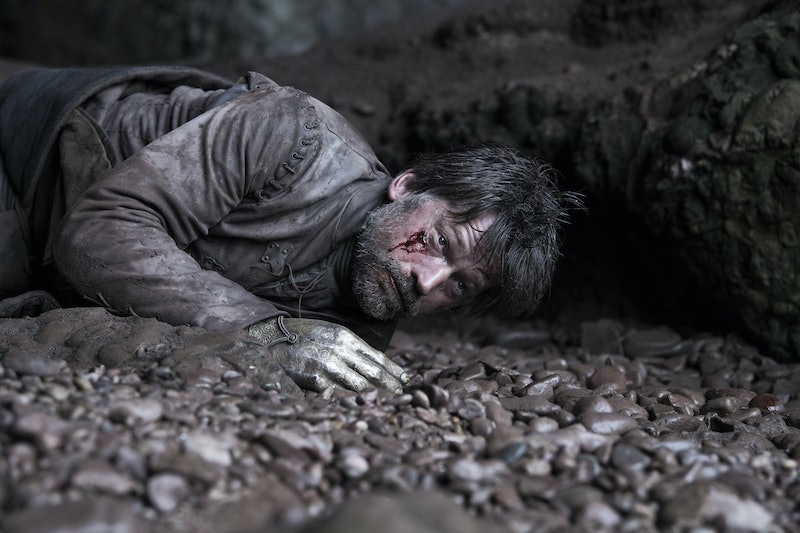 Cats have nine lives, but how many lives does a one-handed Lannister knight have? A post-"The Bells" Game of Thrones theory suggests that Jaime Lannister survived the Red Keep collapse against all odds, and while that may sound far-fetched, there's definitely something curious going on here. Instagram user WeedsAreFlowersToo did a bit of detective work and discovered that as of yet, there haven't been any exit interviews from actor Nikolaj Coster-Waldau, nor has he officially bid his character goodbye on social media (he did post a farewell to working with his TV sister Lena Headey, though). It's enough to make fans go "hmm...", but is it evidence that Jaime actually survived a building collapse and multiple stab wounds? Not quite.

The theory hinges on Coster-Waldau and his co-workers not mentioning Jaime's death on social media just yet — which they haven't — and on the actor's lack of exit interviews. WeedsAreFlowersToo pointed out that Entertainment Weekly's Game of Thrones reporter James Hibberd tweeted to a fan that he's holding off on posting Coster-Waldau's exit interview "for a bit." Hibberd himself is being a bit coy. He tweeted on May 15, "Made it into an #GamesOfThrones fan theory so i feel like I've finally arrived." The journalist also previously wrote that he was surprised by some of the characters that appear in the finale.

On the surface, this builds a decent argument for the possibility that Jaime's time on Game of Thrones isn't up just yet, but that doesn't mean he necessarily survived the wounds he sustained from his fight with Euron and having a rather large castle collapse on his head. Much like Ser Jorah and Lyanna Mormont before him, Jaime may make a final appearance in Season 8 as a corpse. That would mean that technically, his last scene hasn't been shown, even though the character is dead.

Jaime has made it out of his share of seemingly unsurvivable situations in the past including, but not limited to: losing his hand in the middle of a forest, jumping into a bear pit unarmed, charging a dragon, and the Battle of Winterfell. However, even the Kingslayer's luck has its limits. Fans want the character to have a better ending, but barring some sort of Lost-esque twist that sees him reuniting with Brienne in the Night Lands for a cup of ale, it seems as if his time on the show is done.

If he does appear in the final episode, it could be to further Tyrion's anger at Daenerys' sudden turn to the dark side. Finding his big brother's body among the many, many dead in King's Landing would no doubt break Tyrion's heart and further his desire to end the Dragon Queen's reign before it can fully start. That's not exactly a happy ending for Jaime, but at the very least it imbues his death with a small bit of meaning.

Game of Thrones Season 8 has included its share of unexpected twists, so there's always a chance that there's one more coming — especially since Coster-Waldau has yet to say goodbye to his beloved character. But, for now, Jaime fans shouldn't get too excited, because unless something drastic happens, it appears that the Kingslayer has finally run out of lives.

More like this
Viserys’ Fate On 'House Of The Dragon' Could Differ From The Book In This Surprising Way
By Grace Wehniainen
You’ll Definitely Recognise Both Of Ty Tennant’s Parents
By Maxine Harrison
'House Of The Dragon’s Theo Nate Is A “Massive” 'GoT' Fan
By Maxine Harrison
Nicola Coughlan Shared A Lady Whistledown Excerpt From ‘Bridgerton’ Season 3
By Grace Wehniainen, Alyssa Lapid and Sam Ramsden
Get Even More From Bustle — Sign Up For The Newsletter