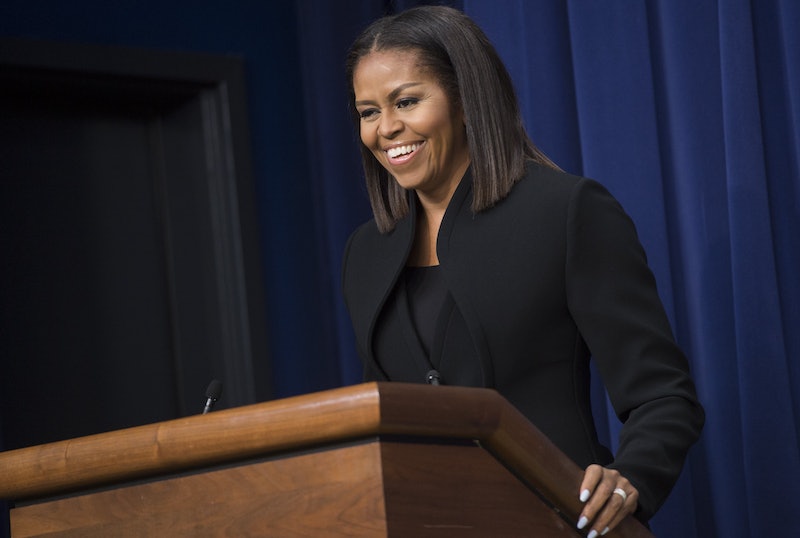 Yes, the day the Obamas leave the White House is almost here, and many of us will probably tear up when it finally happens. (Or, in my case, be full-on crying.) Either way, if you're a fan of First Lady Michelle Obama, this GIF that captures her transition all the way from childhood to her last days in the White House will definitely inspire some emotions.

Throughout her time in the White House, Michelle has been a figure of inspiration and encouragement for Americans, particularly young people and people of color. "Our diversities of faiths and colors and creeds — that is not a threat to who we are," Michelle said during her farewell address on Jan. 6. "It makes us who we are." Despite the politically divisive climate, Michelle's message has been one of hope, and of embracing the future rather than being afraid of it.

If you're worried that Michelle will be disappearing from the public eye come Jan. 21, you probably don't need to be. The Obamas plan on staying in Washington D.C. at least until their daughter Sasha graduates from high school. Still, this doesn't mean Michelle will be running for president (#Michelle2020 trended on Twitter last November), since both Michelle and Barack have dismissed the idea. But she definitely intends to stay involved with her initiatives, including her school lunch initiative, which she mentioned to Jimmy Fallon on last Wednesday's Tonight Show.

In the case that she decides to remain out of the spotlight for some time, at least you have this mesmerizing GIF, courtesy of CompanyReviews.com.

Michelle is planning on setting up an office space in D.C. with a small staff, according to the The Washington Post. Her deputy chief of staff, Melissa Winter, will be heading the team, the Post reported. And while Barack has mentioned that Michelle is working on a memoir, what else is next for the first lady is yet to be decided. Either way, she and the rest of the family deserve a bit of a rest after serving as America's First Family. But given Michelle's go-getter attitude, she likely won't be away from the world of public service for long.

Outside of being married to President Obama, Michelle is among the most academically accomplished first ladies the United States has ever had. She started by skipping the second grade, and went on to earn an undergraduate degree from Princeton and a law degree from Harvard University. Before becoming the first lady, Michelle also used to be the primary breadwinner for her family, the Post reported. We'll have to see whether she takes up that role again in the coming years.

In the meantime, I'll be staring at this GIF and pretending that Friday isn't coming. I'll miss First Lady Michelle Obama. But I look forward to seeing what regular U.S. citizen Michelle Obama has in store for the world.