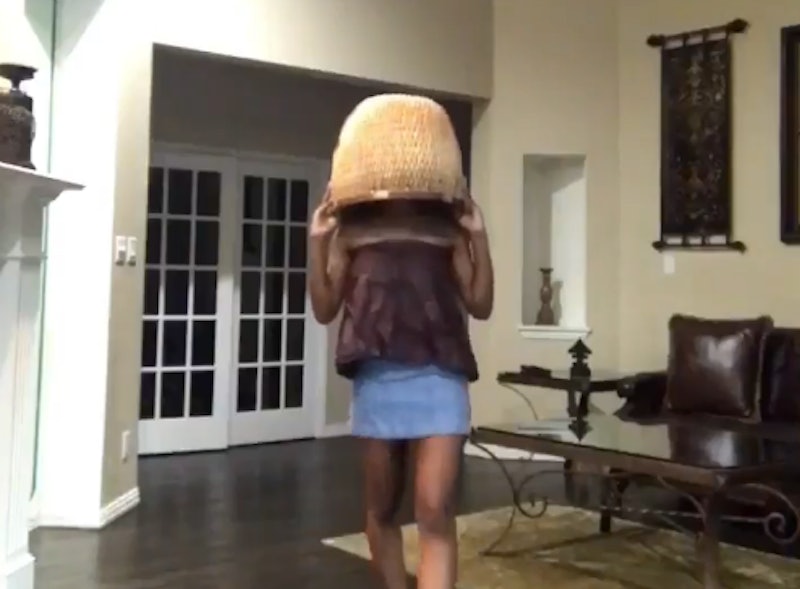 When it comes to the Met Gala, you can guarantee that there will be some unconventional outfit choices. After all, that's what the night is about — wearable art. But one Twitter user had some of the best looks of the night, and she wasn't even there. According to Teen Vogue, Twitter user Quenlin Blackwell's at-home Met Gala outfits won the internet over in just 38 seconds. Social media went crazy over her quirky designs, and some are even hoping to see her walk the red carpet next year.

Some of the most "wait, what?" fashion moments come from the Met Gala. This year alone Jaden Smith brought his cut off hair, Kendall Jenner wore nothing but 85,000 crystals, and the Olsen Twins wore everything they owned. But it was Blackwell's at-home creations that won the internet over.

In just 38 seconds, the teen shared six different outfits, ranging from a high-slit sheet gown to wearing a basket on her head. My personal favorite is the sweatshirt with the broom sticking out of the back. But her spinning the basket on her head was also a nice touch. Honestly, it looks like Blackwell put in more effort to go outside of the box than some celebrities did for the big night.

"The looks of all of these celebrities really has Twitter on edge so I thought, 'why not add my look?'" Quen told Teen Vogue. She even called the broom her "make-believe Victoria's Secret wings."

With almost 90,000 likes on Twitter, it's safe to say that she won the entire night. Move over Rihanna, because Blackwell's designs are coming for you! People loved her fashion show so much that they even want to see her walk the red carpet next year. Here are some of the reactions that sum up people's responses the best.

Hands down the winner of the night.

Give the people what they want.

She really is more on-theme though.

Preferably with a broom on her back.

Tyra would be proud.

That sums it up pretty darn well.

Needless to say, Blackwell deserves to be on the best dressed list.

More like this
Harry Styles’ Red Carpet Looks Have One Thing In Common
By El Hunt
These Are The Best Socks A Woman Can Buy
By Lisa Fogarty
How To Wear A Bucket Hat Like Rihanna, Dua Lipa, & More
By Allie Fasanella
Taylor Swift’s Latest Midnights Look Went Heavy On The Glitz
By Allie Fasanella
Get Even More From Bustle — Sign Up For The Newsletter