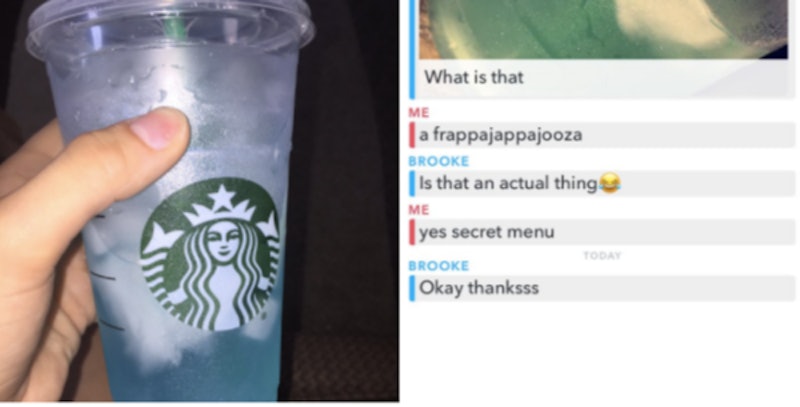 Our obsession with the Starbucks secret menu has gotten out of hand. First of all, it's not a real thing. Secondly, what was once quaint and fun has morphed into an urgent, frantic hunt for the next viral drink. People are desperate to discover the new Pink Drink, or the next Narwhal Frappuccino. It's too much. But where some see syrup-fueled fanaticism, others see opportunity. Specifically, the opportunity to troll. Like Laylah, the 17-year-old who snapped a picture of blue Gatorade in a Starbucks cup, and convinced her friends it was a new secret menu item called the Frappajappajooza.

On Wednesday, the teen posted a picture of her concoction, along with a screenshot of a conversation between her and her hopeful, unsuspecting friend, Brooke, who wanted in on the new drink. Laylah tweeted the pictures and said: "i get most of my entertainment by putting different colored gatorade in starbucks cups and telling people it's a frappajappajooza."

What was a solid, easy prank exploded on Twitter, and by Friday, Laylah's tweet got over 348,000 likes and 94,000 retweets. She even tweeted that she had to mute her phone because she was getting so many notifications, including people saying she inspired them to try something similar.

Others wondered about the poor baristas who would be asked to make a frappajappajooza.

Although the frappajappajooza is a joke (for now — I give it a week before Starbucks makes their own) "secret menu" items have risen in popularity, and baristas seem to have mixed feelings about it. One told New York Magazine:

"Or the secret menu. That’s not a thing. It’s stuff that random-ass people made up online, and then people will come in and try to order stuff and expect us to know what it is, and we have no idea. It sounds good, but unless you can tell us what’s in it, we can’t make it for you. And people get kind of mad about that."

Others told Thrillist that they don't mind, as long as the customer is mindful about how busy they are.

"If it's super busy, I might resent you slightly [for ordering one]," said one. "But if it's not, usually I find it interesting."

Given how quickly new Starbucks drinks have been appearing and disappearing, it's no surprise that Laylah's prank was so successful. In fact, Bustle has its own secret menu troll item (although this one is more existentially fraught).

Currently, neither the Frappajappajooza nor the Thestral Frapp are available at any Starbucks stores.

More like this
On TikTok, Tinned Fish Date Night Is The Latest Viral Food Obsession
By Emma Carey
10 Pumpkin Recipes That Are Way More Creative Than Pie & Lattes
By Rebecca Deczynski and Alexis Morillo
Why TikTok Is Flooded With Controversial Videos About "Pick Me Girls"
By Courtney Young
This TikTok Song About An Unrequited Romance Has FYPs In Shambles
By Emma Carey
Get Even More From Bustle — Sign Up For The Newsletter