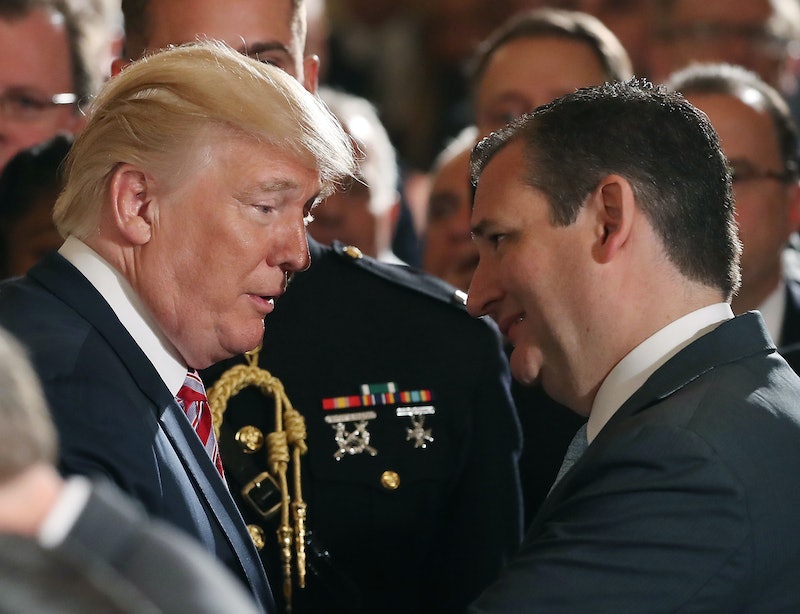 On Saturday, an activist jokingly tweeted that he would like to put one of President Donald Trump's tweets on a billboard, and then started a fundraiser to see if it was possible. Twitter users did not disappoint. In less than a day, the people of the internet raised nearly $10,000 through a GoFundMe intended to bankroll an anti-Ted Cruz billboard in Texas, well surpassing the initial $6,000 goal.

The initiative began after Antonio Arellano, a Houston-based activist, tweeted a photoshopped photo depicting a real Trump tweet superimposed on the billboard. The tweet is from 2016, during the last presidential election, when President Trump and Sen. Ted Cruz, who is up for reelection, were very public foes.

"Why would the people of Texas support Ted Cruz when he has accomplished absolutely nothing for them," it reads. "He is another all talk, no action pol!"

When he shared the image, Arellano wrote that he was "on the market for a billboard, outside the biggest stadium in Texas we can find," a reference to Trump's claim that he will host a "major" pro-Cruz rally in October.

"I’m picking the biggest stadium in Texas we can find," Trump tweeted on Aug. 31. "As you know, Ted has my complete and total Endorsement. His opponent is a disaster for Texas - weak on Second Amendment, Crime, Borders, Military, and Vets!"

Arellano decided to set up a fundraiser for the billboard endeavor after a number of his followers suggested they want to make his joke actually happen, he told the Post. Soon, Parkland survivor and gun control activist David Hogg jumped on board, boosting the fundraiser with his fans, and personally suggesting several more of Trump's anti-Cruz tweets.

Back in 2016, Trump popularized the nickname "Lyin' Ted" for his then-opponent. He frequently used the nickname whenever Cruz's name came up, and especially when writing tweets about the Texas senator. It seems that some Trump opponents aren't so willing to let Trump — or Cruz — forget about their rivalry.

Arellano told the Post that he and the other organizers would like to get at least one Trump tweet on a mobile billboard within the next two weeks. They may choose a different tweet for each side, he said. But first, they also need to decide where send the truck, which will also feature the hashtag #TrumpTweetTruck, he told the Post.

Cruz is slated to face off against Democratic opponent Beto O'Rourke, who seems to have a decent chance of unseating the veteran senator, according to several recent polls. Of course, it's important to remember that placing too much stock in pre-election polling can set you up for a serious let down. Still, however, a Democratic candidate polling so well in a historically-red state does offer hope to Democratic-backing voters, and the election will definitely be closely watched.

As for Trump's plan to hold a rally for Cruz, there aren't any public details as of yet. A lot could feasibly happen between now and October, too, so it's best to keep an eye out for developments. The billboard, however, appears a guarantee.

More like this
How Alexia Del Valle’s Latinx Roots Influence Her Content
By Alexis Morillo
15 Halloween Costumes Inspired By TikTok Trends
By Emma Carey
Why TikTok Is Obsessed With Caesar Salads Right Now
By Alexis Morillo
Behind The Hilarity Of The "POV: You Walk Into My Room" TikTok Trend
By Lexi Inks
Get Even More From Bustle — Sign Up For The Newsletter