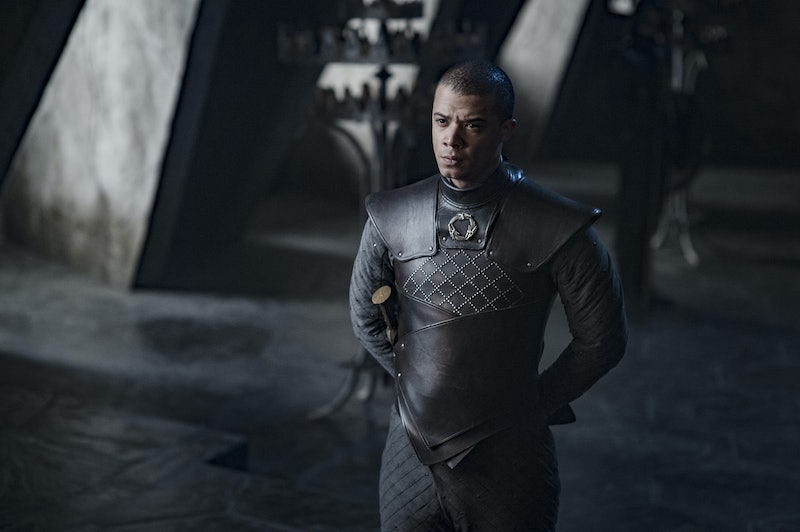 Regardless of how you felt about the Game of Thrones series finale, it definitely made for a surprising season. It also saw the death of many beloved characters, many of whom had been around since the very beginning. But while the final moments of the series appeared to give relatively happy endings to all of the surviving characters, a new Game of Thrones theory about Grey Worm has emerged and suggests that Dany's loyal soldier still ends up meeting a tragic fate, even if it never played out on-screen.

At the end of the episode, Grey Worm is shown leaving with his army of Unsullied on ships heading to the Isle of Naath, which is where Missandei is originally from. Prior to her death, she and Grey Worm made a plan to go there once Daenerys was on the Iron Throne and the war was over. Grey Worm had promised Missandei that the Unsullied would protect her people from harm — a promise that he still intended to keep even though she would no longer be there by his side. It's a sweet way for Grey Worm to honor Missandei while also giving him a somewhat peaceful future. However, considering this is Game of Thrones we're talking about, perhaps his ending isn't as hopeful as it initially appeared.

According to a theory presented by Uproxx, the Isle of Naath may be a beautiful place, full of white beaches and tall trees, but it also houses a dangerous weapon: deadly butterflies. Apparently, those who grew up in the area are immune to what is known as the “butterfly fever,” but foreigners like Grey Worm could be harmed or even killed by it.

In the books, the butterflies in Naath are described as follows:

"A large species of butterfly on Naath is a carrier for a horrific disease that makes the flesh literally slough off of a man’s bones, but the Naathi themselves are immune to it. For centuries, would-be foreign invaders would end up succumbing to the ‘butterfly fever,’ and the Naathi say none maintained a presence on the island for more than a single year.”

So if Grey Worm intends to stay in Naath long enough, he most definitely could succumb to the disease and die, along with all the rest of the Unsullied. It's a heartbreaking possibility to consider, especially considering how much this character has already been through. But if you're wondering how you could've missed such an important detail about Missandei's homeland, it's because this butterfly problem has never been mentioned on the show, at least not directly.

While the topic does come up in George R.R. Martin's novels upon which the series is based, the only nod to it on the show is in the opening credits, where you can find a small image of a butterfly appear next to Nathalie Emmanuel’s name. Is this supposed to serve as confirmation that the deadly butterflies do, in fact, exist and will be waiting for Grey Worm when he reaches Naath's shores? It's possible, though it's hard to believe Missandei would have invited Grey Worm to come home with her if that were the case. She loved him and wouldn't have wanted to put his life at risk.

There's no way to know for sure what really happened to Grey Worm after he set sail for Naath, but it would be a cruel twist of fate if the leader of the Unsullied was taken out by butterflies. But then again, that does sound exactly like something Game of Thrones would do.

More like this
Alicent's Green Dress In 'House Of The Dragon' May Be An Act Of War
By Kadin Burnett
Nicola Coughlan Shared A Lady Whistledown Excerpt From ‘Bridgerton’ Season 3
By Grace Wehniainen, Alyssa Lapid and Sam Ramsden
Viserys’ Fate On 'House Of The Dragon' Could Differ From The Book In This Surprising Way
By Grace Wehniainen
The 'Andor' Timeline, Explained
By Gretchen Smail
Get Even More From Bustle — Sign Up For The Newsletter