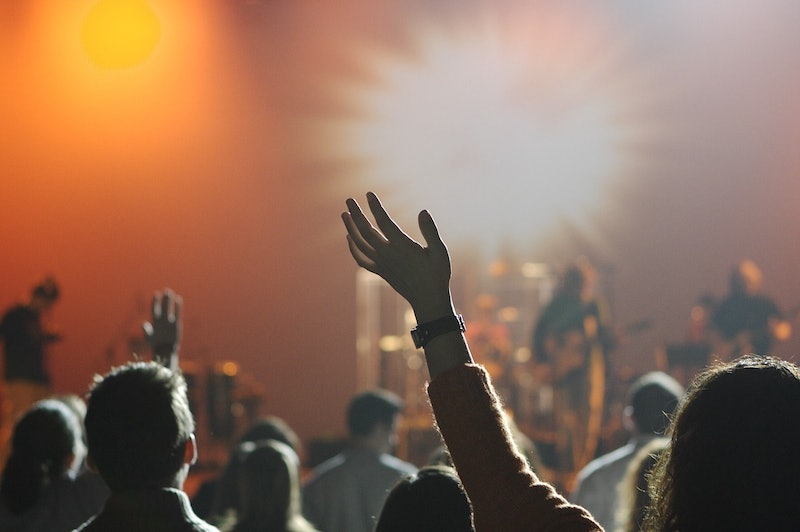 As a society, we're fortunately getting more vocal about sexual harassment — something that became alarmingly commonplace and overlooked despite being so insanely inappropriate. One such act almost went unnoticed, save for the musician who wouldn't allow it: during a recent concert, a guitarist stopped performing to address a woman being sexually harassed in the audience, and he openly shared his feelings about the experience on Twitter.

The Blood Tour was being held at St. Louis' Pageant theater in Missouri, and one of the bands featured was Circa Survive. In the middle of one of their songs, guitarist Brendan Ekstrom mysteriously left the stage. It turns out he was alerting the venue's security of the harassment he had seen happening. Ekstrom acknowledged that of course, he didn't know what the exact situation was; but what he witnessed was disturbing enough that the show simply couldn't go on.

Concerts should be safe, fun, and enjoyable for everyone attending, and Ekstrom made sure of that. In his series of tweets (which are definitely worth a read in full), he explained to confused fans what really happened, first noting that this is the first time in 20 years of performing that he's walked off the stage in a middle of a song.

Ekstrom explained that he led security to the couple and let them handle the situation from there, and he doesn't know what happened after that.

Sexual harassment comes in many forms, from catcalling to that guy who gets a little too close at a concert. We've long dismissed it with that whole "boys will be boys" excuse and put the responsibility of their safety solely on women: don't go anywhere alone. Employ the buddy system. Never leave the house without pepper spray. Take self-defense classes. All good pieces of advice — except none of them do anything to eradicate the problem at hand: the fact that some people still think it's OK to do whatever they please with other people's bodies. We teach women ways to cover up the problem, instead of teaching society how not to cause the problem in the first place. Why? Is it because we think it's too big a problem to tackle? Is it because we don't really think it's that big of a deal to begin with? Both scenarios are wrong, and the latter of the two is dangerously wrong.

On a brighter side, Ekstrom's acts set an excellent example and demonstrate that if you see something you know is wrong, you shouldn't be afraid to speak up for what's right.

Sexual harassment still runs rampant in a number of environments. In the workplace alone, surveys have found that one in three women experience harassment (and only 29 percent report it). Other reports reveal that around 65 percent of all women have been victims of street harassment, with 23 percent having been touched in a sexual manner, 20 percent followed, and nine percent forced into some kind of sexual act.

Speaking up about being on the receiving end of harassment isn't easy. There's the fear of retaliation, of misunderstanding or mislabeling the action, of coming across as that "uptight" kind of girl who thinks everything is harassment. Unfortunately, these exact attitudes help contribute to the lackadaisical mindset many still hold in regard to harassment, even though we don't mean for them to. If you think you've been harassed — or have witnessed harassment — never be afraid to say so!