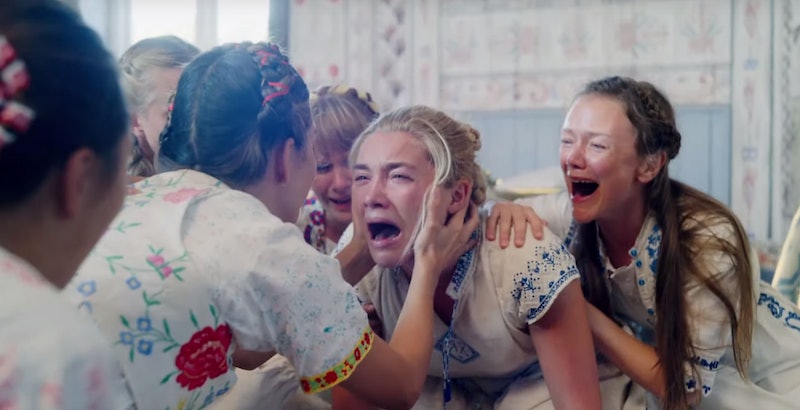 If there's one truth in the world, it's this: people love going to festivals in the summer. You get to dress up, spend time with friends, and just vibe out to good music, good food, and good times. However, the new Midsommar trailer will definitely make you think twice before going to a festival this summer. The trailer gives just a glimpse of what could happen if you go to a foreign summer festival that only happens once every 90 years and drink the punch. Hint: it's not a good time.

Midsommar stars Florence Pugh (Lady Macbeth, Fighting with My Family) as Dani, and she's going through a rough time, and also has a seemingly disappointing boyfriend, Christian, played by Jack Reynor (On the Basis of Sex). According to the Midsommer synopsis from Variety, the two travel to a small village in Sweden with Christian's friends Josh (The Good Place's William Jackson Harper) and Mark (Bandersnatch's Will Poulter) for a rare summer festival.

In the trailer, everything looks peaceful and picture-perfect when they arrive. It seems like just the thing that Dani needs to clear her mind and relax. However, as seen in the trailer, the more time passes, the more clear the "cult-like tendencies" become. And that's when things get creepy.

The movie was directed by Ari Aster who also directed the horror movie hit Hereditary, one of the scariest films to date. According to Aster himself, that movie was so terrifying because it "preys on peoples’ most irremediable fears," Bustle reported from the film's June 2018 press junket. In that instance, the "irremediable fear" was dying alone or not really knowing someone fully before they die. In Midsommar, it looks like that unshakeable fear is something terrible happening when your guard is down at a festival. Or possibly a horror movie happening in broad daylight, because that part alone is unnerving as hell.

Pugh played on this festival gone wrong motif when she tweeted out this new Midsommar trailer with the suggestion to take "Deep breaths everyone.. deeeeep hallucinogenic breaths." And the official poster is of Dani sobbing with a flower crown and the tagline, "Let the festivities begin."

One thing that made Hereditary so scary was the cinematography, so fans will be happy to hear that Hereditary cinematographer Pawel Pogorzelski also filmed Midsommar, which means it's guaranteed to be a beautiful nightmare. But if you're a fan of Aster's mind for horror, you'll have to wait a bit after Midsommar for his next one. “That is the only other horror movie I have,” Aster revealed in January, as reported by IndieWire. “And I’m pretty sure that’s going to be it for a long time. I love the genre, I consider myself a genre filmmaker in that I want to play in every genre. I would love to make a musical. I have 10 other scripts that I’ve written that I want to make and there are other things I have."

Whatever is next for Aster, there's no doubt that Midsommar is going to haunt your flower-crown-loving dreams and have you on edge. And, hopefully, show the world that going to a rural town for a festival and drinking whatever they hand you blindly is not the way to spend the summer months, no matter how sad and lost you feel.

More like this
Paul Mescal, Man Of Mystery
By Samantha Leach and Heather Hazzan
An Extremely Messy Ranking Of What Actually Happens In 'Don't Worry Darling'
By Chloe Foussianes
14 Women To Watch This Oscar Season
By Marina Watts
12 ’90s Movie References You Missed In 'Do Revenge'
By Radhika Menon
Get Even More From Bustle — Sign Up For The Newsletter