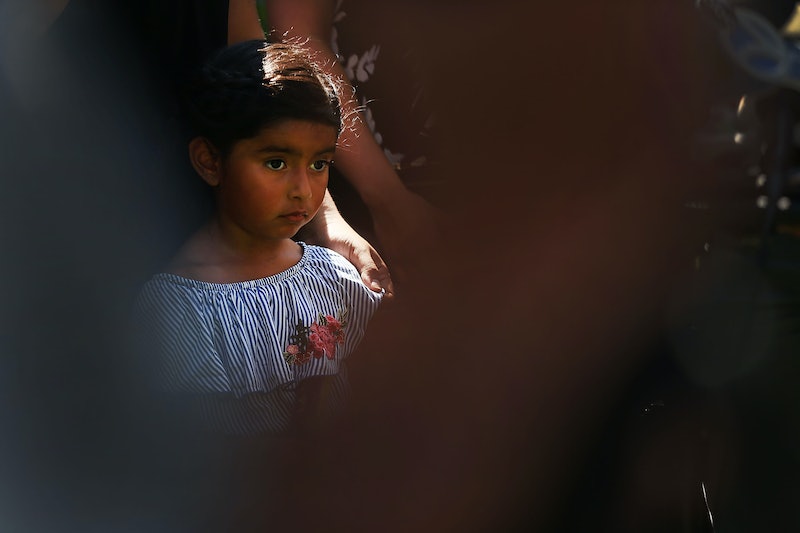 In July, an Immigration and Customs Enforcement official told the Senate Judiciary Committee that the centers where migrant children had been detained were like "summer camps." Now, the same ICE official defended that comparison at a congressional hearing on Tuesday, according to CNN.

At the time, ICE's chief of arrests and deportations Matthew Albence said, "These individuals have access to 24/7 food and water. They have educational opportunities. They have recreational opportunities, both structured as well as unstructured; there’s basketball courts, there’s exercise classes, there’s soccer fields we put in there." Albence also said that he was "very comfortable" with the kind of treatment migrant children reportedly received at these centers.

Not much has changed, it seems, as far as Albence's stance goes. When asked by California Sen. Kamala Harris on Tuesday whether he stood by his description, Albence said, "Absolutely, I do. I believe the standards under which they are kept are very safe; they're humane."

However, CNN reported that Albence did not say whether he would send his own children to such a place. After Sen. Harris asked "Do you have children, or do you know children that have attended summer camp? Would you send your children to one of these detention centers?" Albence said, "That question's not applicable."

The ICE official was asked again whether he would send his loved ones to a detention center. According to CNN, Albence deflected and said, "The point is, the parent made the illegal entry" and that "the parent put themselves in this position."

The notorious detention centers were part of Donald Trump's administration's now-defunct "zero tolerance" family separation policy. According to the Department of Homeland Security, at least 2,000 migrant children were separated from their parents as a result of the government's stance.

In June, Trump signed an executive order to end the policy, instead requiring families to be incarcerated as a unit. Back then, Trump claimed, "We are keeping families together and this will solve that problem. At the time we are keeping a very powerful border and it continues to be a zero tolerance, we have zero tolerance for people that enter our country illegally."

The ICE official was also grilled about reports of abuse at the detention centers. New Hampshire Sen. Maggie Hassan asked Albence if he knew about the American Academy of Pediatrics saying that "even brief detention can cause psychological trauma and induce long-term mental health risks for children." Albence claimed that he only heard of the report in news.

The subject of a child being separated from their parent came up, too. Michigan Sen. Gary Peters peppered Albence with "How long is too long, do you think, to detain a child in a detention facility?" To this, the ICE official simply, "I'm certainly not qualified to answer that question, sir."

While Albence stood by his description of "summer camps," some senators sought for alternatives to detaining families. Missouri Sen. Claire McCaskill asked whether electronic documentation would help as well as bolstering attorney access for undocumented migrants. "Wouldn't this be a better investment," McCaskill asked Albence, "than building family prisons?"