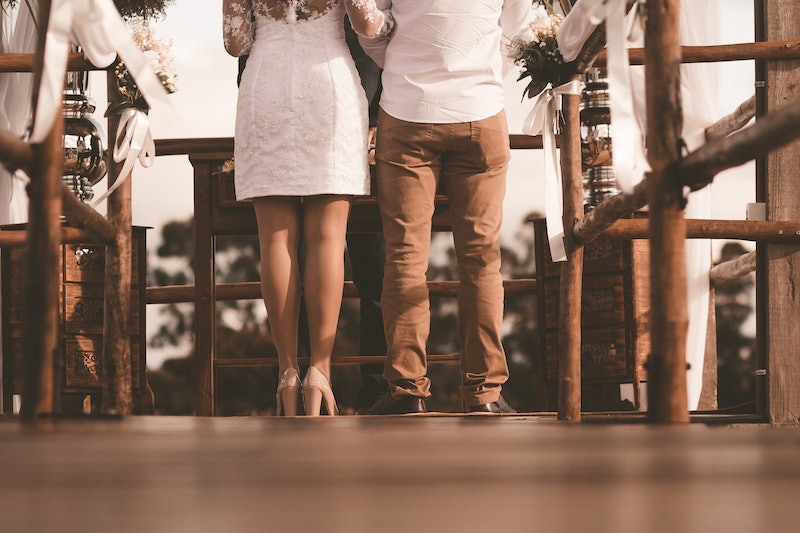 We’re deep in the throes of wedding season right now, which means a lot of folks have probably had gifts — either for yourself if you’re about to get hitched, or for your favorite people if you’ve got a wedding or two to attend in the near future — on the brain lately. And hey, guess what? I’ve got good news for you: The most popular wedding gift of 2017 has been revealed, so if you’re looking for some inspiration, here's a good indication of whether you’re on the right track. According to Delish, registry site Zola recently unveiled its list of the most-registered-for items of 2017, and in the top slot is... drumroll, please... a cast iron skillet. Specifically, it is this cast iron skillet: The Lodge Logic Cast Iron Skillet. The best part is that it's both practical and affordable, which ticks off all the boxes in my book.

I know, I know — “BUT WHAT ABOUT LE CREUSET????”, you might be wondering right about now. The French cookware company is seen by many as the be-all, end-all cast iron, and I won’t lie — I’ve definitely coveted a Le Creuset item or two myself over the years. I’ve never sprung for one, however, because I find the prices downright intimidating. I mean, if you have Le Creuset cookware, then awesome; that's rad. Enjoy it. If you don’t, though, my point is that that’s OK, too. There are lots of solid cast iron options out there; you don’t need to have the most expensive one in order to make good food.

And, hey, Lodge has good pedigree, too; founded in 1896 by Joseph Lodge, it’s one of the oldest cookware companies that’s been in continuous operation in the United States. It’s even still run by the Lodge family today (no, not that Lodge family). And when I say “affordable,” I do mean affordable; the 12-inch Lodge Pro-Logic Cast Iron Skillet goes for just $39.50 on Lodge’s website. On Zola, it’s even cheaper — currently $29.99 — and on Amazon, you can get the skillet for $17. It’s pre-seasoned, too — and while you can’t beat a years-old piece of well-used, well-cared-for cast iron, pre-seasoned options give you some good starting points if you haven’t inherited any seasoned pots or pans yourself so far.

It might look unassuming, but do not be fooled; a good cast iron skillet is indispensable.

But, of course, we can't talk about wedding gifts without talking about wedding gift etiquette. Personally, I am of the opinion that wedding gift etiquette is bananas. There are all sorts of weird rules about how much you’re supposed to spend,whether you should be giving actual items at a wedding or just money (according to some folks, the registry is for the bridal shower and money is for the wedding), whether it’s gauche to ask for cash instead of gifts (which seems at odds with the previous “rule,” no?), and so on and so forth, all of which fail to take into account the individual circumstances of everyone involved. The way I see it, whoever is on the receiving end of the gift should be doing so graciously no matter it is, whoever is doing the giving shouldn’t be attaching any strings to the gift — and perhaps most importantly, gifts shouldn’t be a requirement at all.

And honestly, that’s why I actually love the fact that this $27 cast iron skillet is at the top of this particular list. It’s useful, it’s not the end of the world if you end up with more than one (I can't tell you how many times I've had two pans going and wished more than just one of them was cast iron), and it’s not going to break the bank for folks who don’t have hundreds of dollars of disposable income to spend on wedding gifts. And if you don’t end up with this practical and timeless item bestowed upon you by the generous people in your life? You’ll probably be able to spring for it yourself eventually. Saving in this economy can be tough, but socking away a couple of bucks every paycheck can be manageable; the budget jar saving method is made for stuff like this.

Interestingly, he rest of the top 10 on Zola’s list according to Real Simple comprises almost entirely kitchen-based items so clearly folks are interested in replacing, upgrading, or adding onto their cookware collections when they tie the knot. The KitchenAid Artisan Series 5 Qt. Tilt-Head Stand Mixer came in at number two, the Cuisinart Round Classic Waffle Maker locked in at number four, Le Creuset makes an appearance in the form of a Covered Rectangular Casserole Dish at number eight, and set of six Schott Zwiesel Pure Champagne Flutes took the number 10 slot. The one exception to the kitchenware rule here? A $100 Airbnb gift card, which landed at number three. I think that’s a pretty fabulous gift idea, too, so if you’ve been debating springing for something like that for some travel-minded pals, go for it — they’ll probably love it.

Regardless as to what you spring for or what you receive, though, it’s always worth it to remember that a gift is just that — a gift. In a world where weddings are so frequently weighed down with so much cultural baggage and steeped in the wedding industrial complex, I think there’s something to be said for keeping that in mind. It’s a celebration, right? Right. So, have fun, party hearty, and surround yourself with people you love. I can’t imagine a better wedding than that.