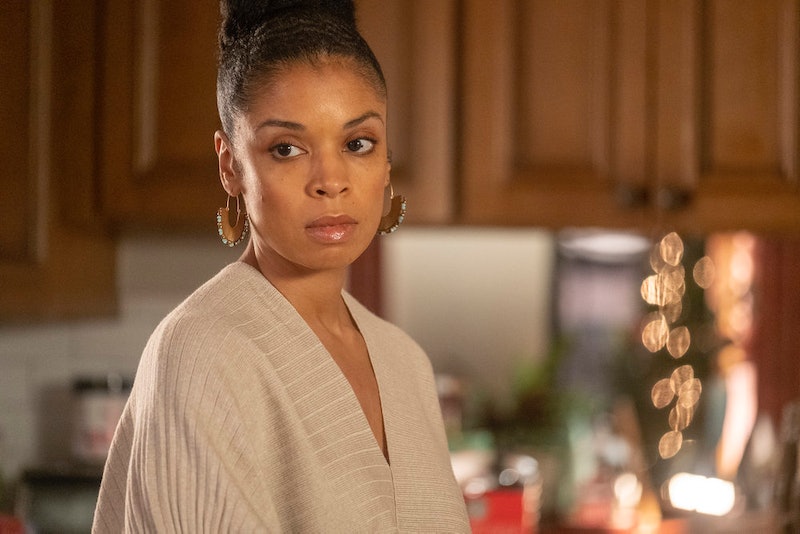 This Is Us may be based in a fictional world, but that doesn't stop the series from making various — very real — pop culture references on an almost weekly basis. From a visit to Joni Mitchell's house to Kevin and Sophie's history with Good Will Hunting, these characters love entertainment as much as we do. In fact, Beth even made a Grey's Anatomy reference on This Is Us during Tuesday night's episode "Cloud," proving once and for all that she and Randall have the best taste in TV shows.

The majority of the episode centered around Randall's first therapy appointment — an endeavor that ultimately doesn't go very well and ends with him storming out the door. He returns home to Beth, admitting that it doesn't seem to be working for him and that he doesn't intend on going back. That's when his beloved wife gives him the hard truth: she needs him to return to therapy and get better because she needs him to be strong enough so that she can confide in him about her own problems without fear of overwhelming him. "You're my person," she concludes to Randall, which is precisely where the aforementioned Grey's Anatomy connection comes into play.

For those of you who aren't fans of the medical drama, or if you just need a refresher of how that iconic quote came to be, here's the gist of it. During the show's second season, Cristina Yang (played by Sandra Oh) discovers that she is pregnant and decides to get an abortion. However, in order to do so, she needs to list someone as an emergency contact who will pick her up, and Cristina chooses Meredith to be that individual, telling her, “You’re my person."

After that, it became a staple of Grey's Anatomy, and, as made clear by Randall and Beth, it has even made its way into everyday conversation. While it may not have been originally intended to be a phrase that married couples say to each other, Beth's use of the term shows how much Randall means to her. He isn't just her husband and her lover, he's also her best friend, and she needs her best friend — her person — to get the help he needs so that they can continue to be there equally for one another.

Beth's speech was enough to prompt Randall to give therapy another try, recognizing that he has to do this for the betterment of his family. Because he doesn't just want Beth to be his support system, he wants to be hers as well. So, long story short: never underestimate the power of a good Grey's Anatomy episode.

More like this
'Grey's Anatomy's New Intern Got Advice From Dr. Bailey Herself
By Grace Wehniainen
Nicola Coughlan Shared A Lady Whistledown Excerpt From ‘Bridgerton’ Season 3
By Grace Wehniainen, Alyssa Lapid and Sam Ramsden
The 'Andor' Timeline, Explained
By Gretchen Smail
Alicent's Green Dress In 'House Of The Dragon' May Be An Act Of War
By Kadin Burnett
Get Even More From Bustle — Sign Up For The Newsletter