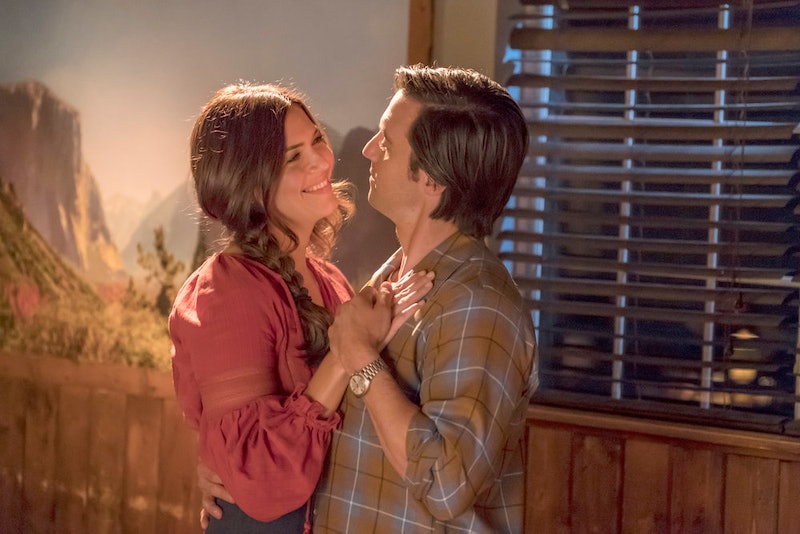 For once, the Pearsons are making us cry happy tears. On Sunday, NBC announced that This Is Us has been renewed through Season 6. That's right, the show just scored a major three season renewal that will keep it on the air through at least 2022. This Is Us wrapped Season 3 back in early April with a flashforward that seemed to be pointing toward the series' endgame, so it's only fitting that the show earned a multi-season renewal that should give fans some assurance that the family drama will be allowed to end on its own terms.

One thing is clear, the show's end is still a long ways off. Per The Hollywood Reporter, NBC is hopeful that the series could last beyond Season 6, too. But for now, series creator Dan Fogelman is just happy that This Is Us won't be going anywhere anytime soon. He shared his joy over the news in a Twitter thread, writing:

"Three years ago, we were live tweeting the premiere of our TV show, hoping someone, anyone might watch...

Today our friends at @nbc picked up #ThisIsUs for THREE more seasons, bringing us to six.

It is an amazing show of support, and it due to the hard work of the 300+ talented, kind people who have devoted the last three years of their professional lives to our show.

Except for Miguel, who takes it day by day.

Congratulations to all involved. We can’t wait to get back to work. #ThisIsUs"

And it's safe to say that the fans can't wait to see what happens next, especially after that finale bombshell that confirmed Rebecca is the "her" the show has been teasing since Season 2.

In a statement to THR, NBC Entertainment scripted presidents Lisa Katz and Tracey Pakosta said, "In a television landscape with nearly 500 original scripted series, there are very few, if any, that have the critical and cultural impact of This Is Us and we couldn't be more proud to bring fans three more seasons of a show that so well represents the NBC brand. A huge thank you and congratulations to our executive producers, cast and crew who reach new heights every week with the show’s inventive and compelling storytelling."

On Instagram, the cast echoed the excitement of NBC and Fogelman. Mandy Moore wrote, "We are all BEYOND excited to share the good news that we have been renewed for 3 MORE SEASONS! Obviously that means we have a lot more laughing, crying, healing, growing and more to do together. None of this would be possible without your unwavering support from episode 1 and our entire TIU family is unbelievably grateful. So buckle up, we’re just getting started!! #thisisus." Her TV son, Justin Hartley, shared a video from the official This Is Us Instagram, and added, "We're back! Incredible to see how far we’ve come in three seasons. Excited to see what's in store for the next three. #ThisIsUs."

The This Is Us three season renewal is a win not only for the show's actors and crew, but also for the fans. It's hard to watch the show and not feel like an honorary member of the Pearson family, and knowing that the characters' journeys will continue for at least three more years is news worthy of a Big Three chant.