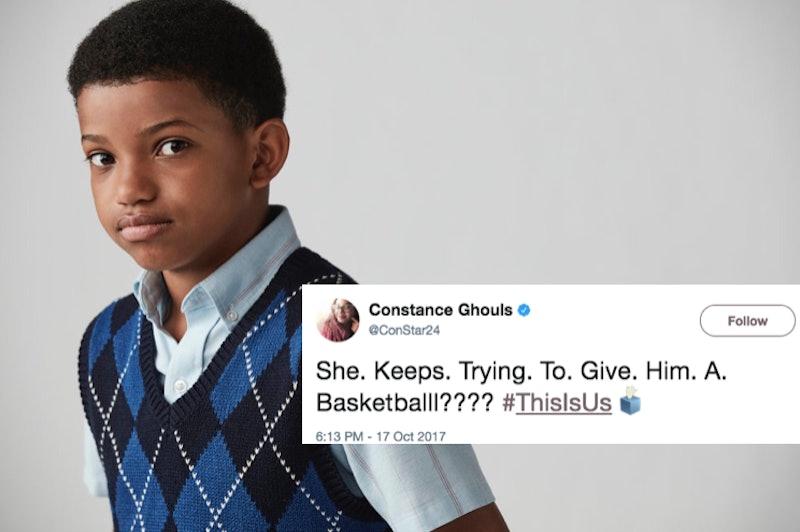 The Pearson clan may be tight on This Is Us, but Randall’s always known he was different. As the only black member of his adopted white family, viewers have seen Randall struggle with his identity. He is a black man in a white world — his family is white, his neighborhood is white, and, up until he recently quit, his job was full of white people. Although Jack and Rebecca always tried to protect Randall from bigots and rude jerks, Rebecca’s mother, of all people, pushed a major conversation on the show. The Oct. 17 episode of This Is Us tackled quiet racism, and fans of the show took notice.

From the beginning of the show, Rebecca’s mother has been, uh, less than supportive of her daughter. An earlier appearance showed that she’s obsessed with appearances and she doesn’t think that Jack is good enough for her daughter. So, fans have never really liked the matriarch. But, snide opinions gave way to something more sinister in Tuesday's episode.

During a snowstorm, Rebecca’s mother decides to drop in from Connecticut to “help” with the kids, and by help, I mean torture Rebecca and her family. This lady is problematic in so many ways. Not only does she giveKate a dress that’s too small to be her "goal" dress, but she gives Randall a basketball, insinuating that because he is black, he should play. Rebecca comments that it's the third one she's given him, and Randall could not look less interested in the sport. But, Randall tells his grandmother that he’ll try if it will make her happy. Grandma also calls the children “the twins and Randall,” she takes no interest in Randall’s Rube Goldberg science project, and she says, “Who would have thought that Randall would be the one to get into private school?" Basically the lady is awful.

After Rebecca’s mom says that she didn't like the way their black maid spoke when Rebecca was growing up, because she didn’t want her kids speaking like “street children,” Rebecca has basically had enough. She confronts her mother, listing all of the ways she’s subtly and not so subtly shown her racism over the years. She says:

"Randall tries so hard to get you to like him. And honestly, I’ve always wondered if the reason that you never bonded with him was because he’s adopted. But you’ve made it alarmingly clear that it’s because he’s black ... Just because he’s black doesn’t mean he likes basketball. He likes football, like the rest of us, OK? And you got to stop constantly separating him from Kevin and Kate, OK? They’re all my kids, OK? When the snow is gone, I want you gone, too, because I will not expose Randall to any more of this crap.”

Go, Rebecca! Unfortunately, Randall overhears the whole exchange, and he doesn’t initially understand how racism can exist in the things you don't say. He says that his grandma has never said anything mean to him. That's when Jack and Rebecca have to explain microaggressions to their 10-year-old. Little Randall only knows the outward kind of racism, but he doesn’t know the subtle kind — the stereotypes, the insinuations, the ways he’s treated differently than his white siblings. These sorts of conversations aren’t always seen on primetime broadcast television, and This Is Us’ Twitter audience took notice.

Many Were Disgusted By Rebecca's Mom...

And Everyone Was Cheering On Rebecca

They Also Gave Props To This Is Us For Its Approach

In the end, Rebecca's mother tries to excuse her attitude because she grew up in a "different time" and "it's foreign to me, I guess." She tries to bond a little with Randall at the end, and when Grandma finally tells Randall, "you're a special young man," Randall says, "Took you long enough."

The damage is done, and we'll see what kind of relationship Rebecca's mother is allowed to have with Randall, Kate, and Kevin from here on out. But, one of the best things about This Is Us is that it doesn't shy away from the tough stuff. Alcoholism, foster care, death, racism — it's all there. This Is Us took racism head-on on Tuesday and propelled an important conversation forward. Racism is more than being outwardly mean to someone, and people need to know all the different ways that bigotry exists.