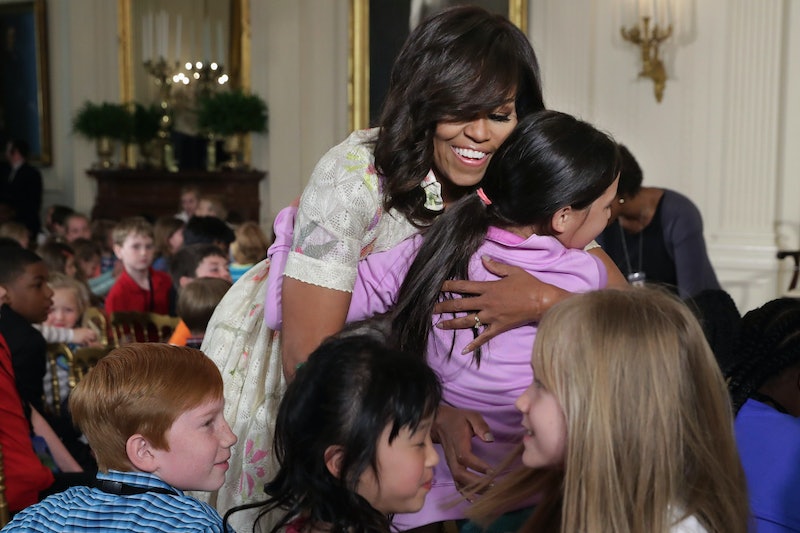 Managing the social calendars of the president and the first lady is no simple task. That is, unless you're Lauren Kelly, Michelle Obama's deputy social secretary and go-to person whenever POTUS and FLOTUS need to host a social event at the White House. Over the course of her nine years as "part of the Obama family," Kelly has planned several hundred events. In an interview, she tells Bustle what Michelle Obama's final White House event would look like from Kelly's perspective.

"Unfortunately, the White House isn’t big enough to hold all the people that I would want to invite," Kelly tells me, "but I would want to do something with kids because that has been such a theme throughout this administration, for both the president and first lady."

She's right. The Obamas have made the White House a kid-friendly place throughout their eight years, hosting everything from the annual Easter Egg Roll to a Kids' State Dinner to the first-ever Meeting of Kid Science Advisors. Because Kelly has helped plan some of these events, she's seen how Michelle genuinely enjoys having the kids around.

"To see them interact with children is awesome, and to see kids interact with them, to see them look up to the president and first lady, has been an amazing thing to help facilitate," Kelly says.

Michelle's work as First Lady has gone beyond social events that bring in hundreds of tiny guests to the White House; she's made them her focus of program initiatives too. In 2010, Michelle launched her "Let's Move!" program, which sparked a national discussion on healthy families, and for which President Obama created a Task Force on Childhood Obesity. It has reached more than 12 million kids nationwide. Similarly, she created "Reach Higher" in 2014 to encourage every student to pursue education past high school. Most recently, she started "Let Girls Learn" in 2015 to help young girls living abroad attain education.

"I think the most fitting outgoing event would be to do something with kids."

Kids everywhere have benefited from FLOTUS' time in the White House, and if Kelly had her way, they'd all be at a final celebration put on by Michelle. "I think the most fitting outgoing event would be to do something with kids, and either bring back all the kids who have come through over the years," she tells me.

As she prepares to leave the White House with the Obamas, Kelly reflected on one of the most memorable events she's been involved with: The First Lady's first-ever Girl Scouts campout on the South Lawn of the White House. It was hosted on the South Lawn, "basically using the same, physical space where we [previously] had this huge event for the Pope, to have 100 girls spend the night at the White House," Kelly says.

Whether it's 100 tiny Girl Scouts or another kid-friendly event, Kelly says she finds joy in listening to the ambitious, unprecedented social events the first lady wants to host, and making that happen. "The president and first lady have made it their mission to make sure all Americans know that the White House isn’t just their house, it’s the 'People’s House,'” Kelly, pictured above in the green dress, tells me.

Although Kelly and her team of five receive "big, awesome, crazy ideas" for social events, she says one of her favorite parts of the job is being creative and finding a way to pull off unprecedented events. After successfully hosting a music festival for 2,000 people on the South Lawn, getting 10,000 people on that same lawn before 9 a.m. for the Pope's visit, and organizing the filming of a TV show (NCIS) for the first time at the White House, I suspect Kelly could easily pull off a final, outgoing celebration for Michelle Obama, complete with hundreds of the screaming, smiling kids who have visited her throughout the past eight years.

Image: This official White House photograph is being made available only for publication by Bustle. The photograph may not be manipulated in any way and may not be used in commercial or political materials, advertisements, emails, products, promotions that in any way suggests approval or endorsement of the President, the First Family, or the White House.