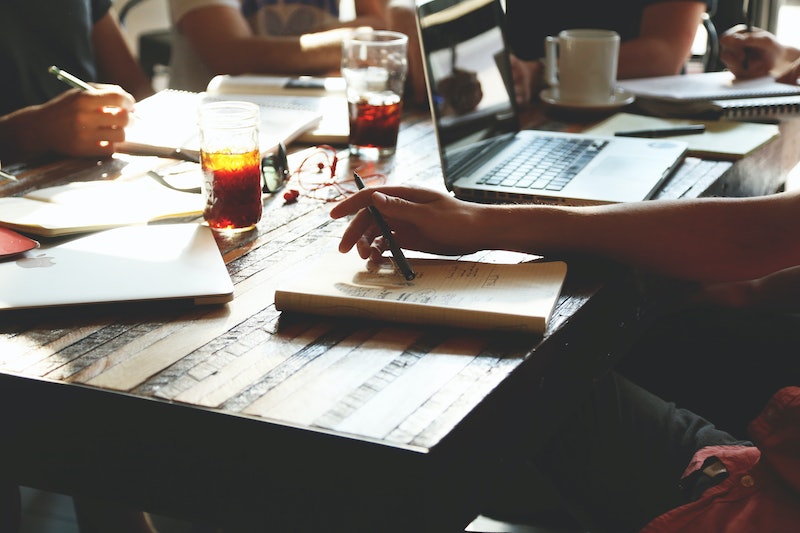 Here’s something fun with which to kick off your Tuesday morning (and by “fun,” I mean “hideous and horrifying and yet I can’t look away”): This viral job listing for a theatre company in London might just be the most absurd thing currently on the internet. Located at the Vauxhall Pleasure Gardens, the Tea House Theatre is apparently seeking an Office Administrator… but, you guys? I would think twice before you apply for it. Although the job description tries to make the point that millennials are the worst thing ever to happen to the world, what it really does is make that exact point about the people who wrote the listing in the first place. Also? It is off the rails.

Bustle has reached out to the Tea House Theatre for comment, but received no response by press time. Said Arts Council England in a statement released on Twitter, "We're aware of a job that was posted on ArtsJobs that breached our terms (in this case targeting a specific age group). ArtsJobs is made up of user generated content and this job advert has now been removed."

The listing has since been removed from ArtsJobs, where it was originally posted — but, for better or for worse, the internet is forever, which means that it’s still accessible in a variety of ways. There are screenshots, of course; they’re all over Twitter, drawing everything from ire and outrage to grammatical corrections (and, in some cases, outraged grammatical corrections, which I completely understand. The first two sentences in this job listing are not sentences. They are travesties). But — perhaps even more damning than the screenshots — there is also the fact of the Wayback Machine, which has preserved the listing as it stood on July 17, 2017 for all to see. Originally intended to close on July 21, 2017, the job was full time and paid between £15,000 and £20,000; its description read as follows:

Is this you right now?

I’m honestly not sure what, exactly, they were hoping a listing like this might accomplish. I don’t know about you, but literally nothing about it makes me want to apply for the job. The turnover rate is high, as evinced by the fact that this is the third time in three month the company has had to advertise for the position (by their own admission!); the pay is so low as to be barely livable (£15k to £20k is equivalent to roughly $19,500 to $26k, which doesn’t go very far when you’reliving in one of the most expensive cities in the world); and if the tone of the listing is anything to go by, the work environment is going to be at best dysfunctional and at worst downright hostile.

The funny thing is that, if it weren’t for three very specific moments, the listing itself wasn’t that bad. Pretentious, perhaps, but not terrible; the duties described are typical of theatre administrators, and yes, working for a small theatre company in particular can be a little fly-by-the-seat-of-your-pants. But it’s these three sections that move the listing from being a little eccentric to cringeworthy:

These three moments seem to be aimed at “putting millennials in their place” — telling us what we’re worth (not much), instructing us that we should be grateful that anyone wants to employ us (because we’re all so hopeless), teaching us that we aren’t even worthy of having a job that pays a living wage and being treated with respect and being able to survive in the world. The only reasoning I can think of behind using language like this is that it’s a misguided attempt to light a fire under our butts, or maybe meant as a way to “self-select” applicants. Maybe they’re thinking that the “right” person for the job will look at this and think, “Oooh! A challenge!”? I don’t know. Most people are probably looking at it and thinking, “Yeeeeeeah, if I were going to take a job in that sort of work environment, you’d need to be offering a much, much higher salary.” To use their own words, I have not been impressed so far.

The thing that really sucks about it is that there are a lot of people who are in the position of looking at listings like this and not necessarily having the luxury of being able to say, “Nah, that sounds too bananas.” It’s true that the economy has recovered somewhat since the recession, but many people are still hurting; it’s far from uncommon for folks to take or stay in jobs with terrible work environments because, y’know, they need to pay their bills. I’ve been there; at the time, I was just happy to have a job at all, knowing that they were so few and far between.

Like many millennials, I am accustomed at this point to my generation being continually labeled as “lazy,” “entitled,” and “failing to launch.” These stereotypes have been proven to be unfounded by study after study, but they continue to persist, largely perpetuated by people who seem to think that eating the occasional avocado is the only thing standing in the way between us and homeownership. (Spoiler: It’s not. It’s really, really not.) But I wonder if the people who make a point of perpetuating these myths realize that doing so says more about them than it says about the people they’re lambasting. "Yes, do let's refuse to pay people wages they can live on and then blame them for the fact that their pay is so low. That makes perfect sense."

There’s also this — and, honestly, it’s this detail that makes me wonder if maybe the listing isn’t all that it seems to be: I’m a little curious about the claim in the listing’s first sentence that the theatre has been “a professional company in the arts industry for the best part of 20 years.” According to its website, Tea House Theatre was founded in July of 2011 — a mere six years ago, nowhere near the two decades claimed in the listing. That’s…weird. I mean, yes, it’s possible the company itself existed before it found its home at this particular venue; however, the discrepancy is still a little odd to me. If that were the case, it would make more sense for the website to identify the fact that the theatre company was originally founded circa 1997 before taking up residence in the Vauxhall location in 2011.

Not going to lie: Part of me wonders whether this is all a big stunt — a sort of viral marketing campaign for an upcoming show about terrible bosses and millennials in the workplace.

In fact, I kind of hope that’s the case. Because if it’s not? I shudder to imagine what kind of person you need to be in order to think it’s OK to speak to other people the way this job listing does. Treating others with basic respect costs you nothing. And that’s something we could all stand to remember every now and again.

More like this
On TikTok, Tinned Fish Date Night Is The Latest Viral Food Obsession
By Emma Carey
8 Completely Unserious Tips To Make Your Cuffing Season A Success
By Ginny Hogan
Why TikTok Is Flooded With Controversial Videos About "Pick Me Girls"
By Courtney Young
This TikTok Song About An Unrequited Romance Has FYPs In Shambles
By Emma Carey
Get Even More From Bustle — Sign Up For The Newsletter