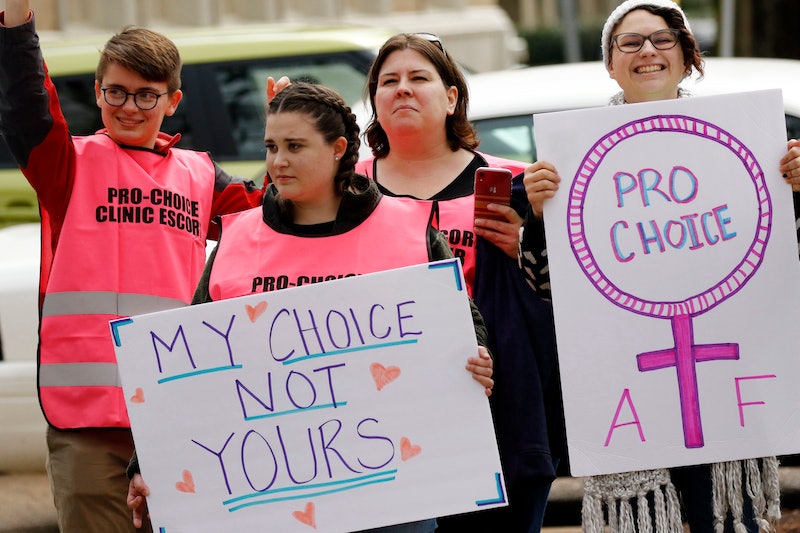 The highest court in Kansas handed reproductive rights advocates a huge victory Friday in a landmark ruling that could ultimately pave the way for abortion restrictions to be legally challenged in other states. In a 6-1 ruling, Kansas' Supreme Court ruled abortion rights are protected by the state's constitution. Along with blocking a 2015 law that barred second-trimester abortion procedures in the state, Friday's ruling also ensured that, even if Roe v. Wade was overturned on the federal level, abortion would remain legal in Kansas, NPR reported.

In its ruling, the Kansas Supreme Court cited Section 1 of the Kansas Constitution Bill of Rights, which reads, "All men are possessed of equal and inalienable natural rights, among which are life, liberty, and the pursuit of happiness." According to the majority opinion, the court was asked to consider if this declaration represented more than "an idealized aspiration" and, if so, did the rights it declared include a woman's right to bodily autonomy.

"We answer these questions, 'Yes,'" the court ruled.

This right, the court wrote in its majority opinion, enabled women to make their own decisions about their bodies, health, and family formation, including any decision regarding abortion. "Although not absolute, this right is fundamental," the court's majority opinion stated. "Accordingly, the State is prohibited from restricting this right unless it is doing so to further a compelling government interest and in a way that is narrowly tailored to that interest."

Abortion rights advocates across the nation celebrated the court's ruling Friday. The Planned Parenthood Action Fund, the advocacy arm of Planned Parenthood, hailed the ruling as "amazing news and a huge victory for Kansans" in a brief tweeted statement. The Center for Reproductive Rights echoed a similar sentiment in a statement describing the ruling as "great news."

"This historic decision reaffirms what we already know: attempts to undermine abortion access are unconstitutional," the organization tweeted.

New York senator and 2020 presidential candidate Kirsten Gillibrand called the ruling "an important reminder that we must continue the fight to protect safe, legal abortion."

But while Friday's ruling has been hailed as a major victory for abortion rights advocates, it has also reportedly spurred conservative lawmakers to ramp up their efforts to amend Kansas' state constitution to include a ban on abortion, according to NPR. Former Kansas state senator and current Senate hopeful Jake LaTurner decreed the ruling on Twitter as "one of the darkest days in" Kansas' history. "The Kansas Supreme Court just abandoned vulnerable mothers and their children to the mercy of an unregulated abortion industry," he tweeted. "This ruling is an abomination." In a separate follow-up tweet, LaTurner urged his supporters to "get back to work taking our state back from unelected liberal judges who do not represent the will of people."

According to The Cut, the ruling from Kansas' Supreme Court comes shortly after at least five states have passed so-called "fetal heartbeat bills" banning abortion at six weeks, often before women even know they're pregnant.