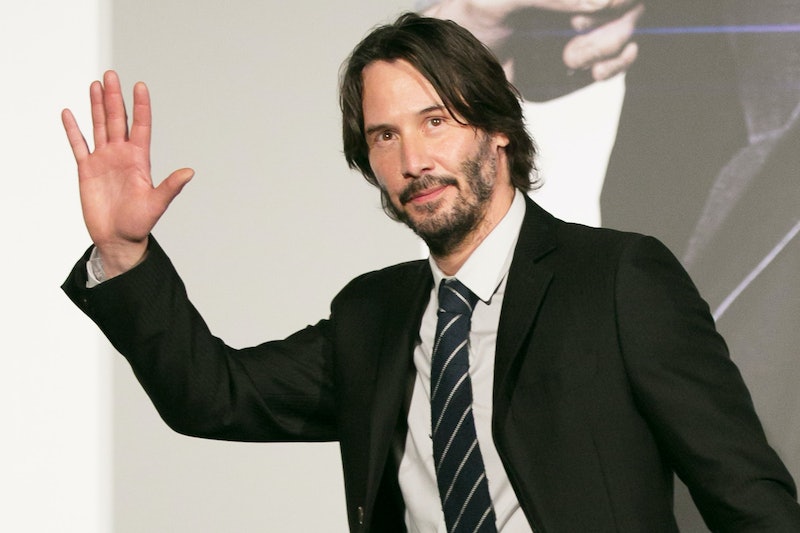 Keanu Reeves is a very good human — and there are literal receipts to prove it. In a series of tweets that first gained traction on Friday, May 17, SBNation writer James Dator recalled a fan encounter with the John Wick star 18 years ago. According to Dator, global movie star Keanu Reeves once bought ice cream he didn’t want just to autograph a receipt for the young fan.

The anecdote, which has since acquired viral status on the internet, goes like this: During the infancy of The Matrix franchise, Dator, then 16 years old, came face-to-face with Reeves during his box office shift at a movie theater in Sydney, Australia. The flustered teen attempted to give the budding star his employee discount in the hopes of acquiring an autograph. It doesn’t go quite as planned, as Reeves displayed confusion over such an offer — unaware of the young fan’s desire to obtain an autograph. However, it all worked out quite well — or, more so, it worked out with an uneaten ice cream cone in the trash.

In his Twitter thread, Dator recalled the “quiet, Wednesday morning” he encountered the star in 2001: “I’m working the box office, bored as hell and suddenly this dude walks up in jeans, a leather jacket and a horse riding helmet. A full ass, weird equestrian looking helmet. It takes me a solid 30 seconds to ignore the helmet and realize it’s Keanu Reeves.”

Dator continued, “He wants to buy a ticket for From Hell, the Johnny Depp movie. I’m so f*cking star struck I do what any sensible 16-year-old does and tell him I’d like to give him my employee discount. This means he needs to sign my sheet and therefore I have his autograph. ‘I don’t work here,’ Keanu says. Seemingly confused by my offer. I’m flustered and just charge him the normal price. Kicking myself after for not getting his autograph.”

However, all hope was not lost. Dator got the autograph. He concluded his anecdote, “2 minutes later there’s a knock on the door behind me that leads into the box office. I assume it’s my manager. It’s Keanu. ‘I realized you probably wanted my autograph,' he says. 'So I signed this.' He hands me a receipt from the concessions stand that he signed on the back. He then casually throws an ice cream cone in the trash can and sees his movie. I realize later that he bought an ice cream cone he didn’t want, just to get receipt paper so he could scribble his autograph for a 16-year-old idiot.”

Dator’s anecdote about the Speed star captured the hearts of many. Twitter user @ParisaFH responded to the tweet with, “I’m just going to go ahead and cry about the sweetness of this” while another user, @Edeeg17, wrote, “Everything I've ever heard about that guy is legit.”

The one drawback of the anecdote? Dator has no recollection of where the famed autographed receipt currently resides. In a follow-up tweet that called for receipts of the said receipt, Dator wrote, “Honestly, it’s either somewhere in the attic of my moms house or lost in the move.”

Which is the more gripping narrative: Reeve’s John Wick franchise or Dator’s harrowing tale of the ice cream receipt? Let’s go with the receipt. Remember: If you ever find yourself wondering just what, exactly, keeps Keanu Reeves so down-to-earth, he answers just that in a segment with BuzzFeed: Gravity.

More like this
An Extremely Messy Ranking Of What Actually Happens In 'Don't Worry Darling'
By Chloe Foussianes
Paul Mescal, Man Of Mystery
By Samantha Leach and Heather Hazzan
Twitter Has So Many Thoughts About ‘Don’t Worry Darling’ After Its Release
By Stephanie Topacio Long
Florence Pugh Reflected On Her ‘Don’t Worry Darling’ Experience On Opening Day
By Brad Witter
Get Even More From Bustle — Sign Up For The Newsletter