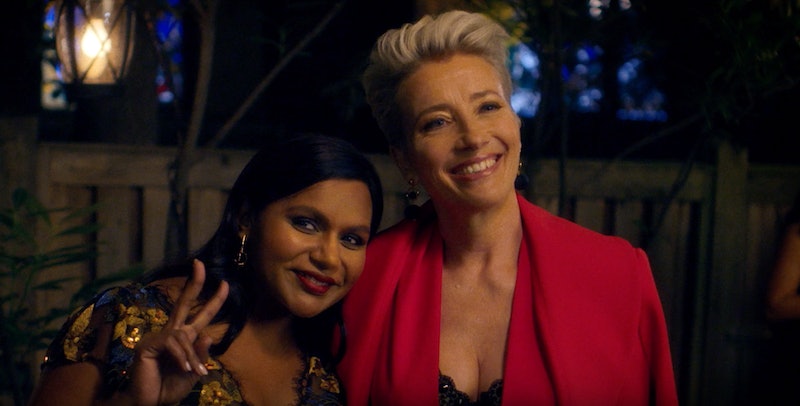 At the beginning of the new trailer for Mindy Kaling’s upcoming film Late Night, Emma Thompson’s character Katherine Newbury is asked if she thinks women are funny. She responds, “funny is funny," paying no mind to gender, before a journalist interjects, “as long as you’re white, male and from an elite college, like your writing staff.” But we know women are totally hilarious, and the new Late Night trailer proves women are very funny, indeed, especially Kaling and Thompson.

Late Night centers on Newbury, the first and only woman to have a long-running program on late night TV, but who recieves some major criticism for hiring only white males in her writers' room. Eventually, her ratings drop and her job is being threatened. Enter Molly Patel (Kaling), who gets hired as the first woman on Newbury's writing staff, despite her cracking jokes during her job as a chemical plant efficiency expert being her only comedy experience. The film description reads:

A lifelong fan, Molly is determined to prove she’s not just a diversity hire, but the one person who can turn her idol’s career around. Going against everything Katherine has staked her reputation on, she urges her to make the show more contemporary, authentic and personal, a move that could make Molly’s career ― or send her back to the chemical plant for good.

Although their work relationship starts off rocky, Patel and Newbury look like they're on the way to becoming the next dynamic comedy duo, especially when the new writer flips the script on the host's "old and white" comedy bits and convinces her to play an utterly hilarious "white savior" in a new segment, a biting and clever take on white allyship to people of color.

Kaling wrote and produced the project, and tapped Nisha Ganatra, who worked with the comedian on The Mindy Project, to direct. John Lithgow, Max Casella, Hugh Dancy, Denis O’Hare, Reid Scott, and Amy Ryan also co-star in the film.

Kaling opened up about the purpose of Late Night in a recent interview with Variety, stating that the movie is partially a reflection of her experience as a woman of color in the entertainment business. “Obviously I’m making a comedy movie, so things are exaggerated for comic effect, but similar things have happened to me in my career,” Kaling, who was the only female writer of color during her time at The Office, explained. “It’s not so much that the people in the film that I portray are bigoted. They’ve just been sheltered by the status quo. And every one of these people in the movie change. They’re not evil. They evolve.”

Thompson was also very aware of the film’s message when she signed on, and praised how Kaling tackled the topic. “It’s a political piece without banging you over the head with its message,” Thompson said to Variety about the film.

Late Night hits theaters on June 7, and surely, it will make you want Thompson and Kaling to become actual figures of late night, where, unfortunately, the field is still a majority white and male.