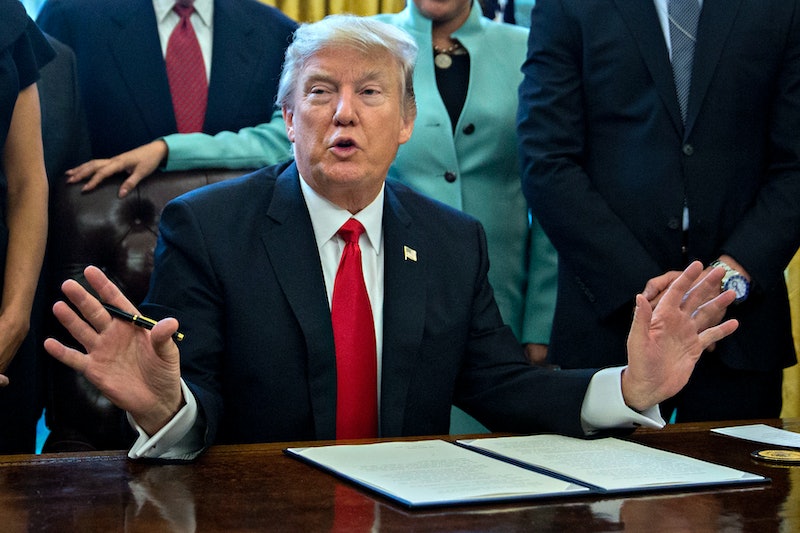 After making hundreds of promises over the course of his presidential campaign, Donald Trump has signed a long list of executive orders and memorandums in his mission to make good on his word. By his 10th day as POTUS, he had already signed 18 of such orders, just one short of Barack Obama's total of 19 executive orders enacted during his first 100 days in office.

So far the issues Trump has attempted to tackle include the construction of the wall on the border of Mexico; repealing the Affordable Care Act; cutting off federal funding to "sanctuary cities"'; reinstating the Mexico City Policy; and temporarily refusing U.S. entry to refugees and travelers from seven Muslim-majority nations. And other things.

Nearly every single one of these decrees has sparked national protests, petitions, condemnation from activist organizations, criticism from legislators across America, and disapproval from international leaders. Given the fast pace at which the new administration is fueling public outcries, it's more than understandable if you haven't been able to keep up with the details of all the shifts the U.S. is going through.

Right now Trump's list of executive actions, while already lengthy for a president who's been in office less than two weeks, is still short enough to catch up on. It would be a good idea to get familiar with these orders and memorandums before their number gets to be astronomical.

President Trump's first executive action was to start his work on dismantling the Affordable Care Act. While the GOP works on repealing the ACA, this order grants the Secretary of Health and Human Service and "the heads of all other executive departments and agencies" permission to delay the implementation of any provision of the ACA that would impose financial difficulties on a state or "a cost, fee, tax, penalty, or regulatory burden on individuals, families, healthcare providers, health insurers, patients, recipients of healthcare services, purchasers of health insurance, or makers of medical devices, products, or medications."

Obama introduced various regulations that required manufacturers of certain products, such as air conditioners, refrigerators, laundry machines, commercial boilers, and other home appliances, to lower their use of energy. These rules were meant to combat climate change and lower energy bills for consumers. Trump's regulatory process memorandum puts all these regulations to a stop.

Also known as the "global gag rule," the Mexico City Policy prohibits U.S. foreign aid from going to overseas organizations that not only provide abortion services, but so much as mention abortion as a viable option for family-planning.

Unlike almost every other stance Trump has taken, his decision to withdraw from Trans-Pacific Partnership negotiations was praised by Democrats like Bernie Sanders and Tammy Baldwin. The TPP was a proposed trade deal between the United States and 11 other countries in the Pacific Rim. Its goals were to lower tariffs between the nations involved and to counteract China's overwhelming influence in the region, but critics argued that it would only lead to a loss of American jobs due to business owners feeling encouraged to continue outsourcing. The trade deal needed to be ratified by all 12 countries involved in order to be enacted, meaning it effectively died with Trump's executive order.

Reportedly as part of his plan to save the American people money, the new president ordered a freeze on hiring of federal civilian employees in the executive branch, unless the employee is military personnel or would meet national security or public safety responsibilities. Similar freezes have proven to be largely ineffective in the past, the Washington Post reported.

President Trump signed two memorandums to speed up the construction process of two highly controversial pipelines — the Keystone XL Pipeline, which is opposed for the environmental risks it poses, and the Dakota Access Pipeline, which also poses risks to the environment as well as intrudes on sacred lands of the Standing Rock Sioux tribe. Trump's actions order the secretary of state and the U.S. Army Corps of Engineers to review and approve the necessary permits in an "expedited manner" in order to allow construction.

This memorandum requires that the Council for Environmental Quality review and approve of infrastructure projects within 30 days. The focus is on speeding up business rather than on ensuring environmental safety.

After his actions on the Dakota Access and Keystone XL pipelines, Trump signed another memorandum declaring that "all new pipelines" inside U.S. borders "use materials and equipment produced in the United States, to the maximum extent possible and to the extent permitted by law." Though the goal here is to energize the American steel industry, economists doubt there will be much of a positive result, Reuters reported.

The president also wants to speed up reviews and approvals for domestic manufacturers, as well as reduce "regulatory burdens" on these companies. Under this memorandum, the Secretary of Commerce has 60 days to get feedback from stakeholders and the public regarding manufacturing projects, followed by another 60 days to submit a report to the president.

Trump ordered the cutting of federal funds for sanctuary cities — cities in which undocumented immigrants are not asked about their immigration status by local officers, landlords, doctors, etc. In addition to this stripping of funds, Trump's order calls for the hiring of 10,000 new Immigration and Customs Enforcement agents; authorizes local law enforcement officers to acts as immigration agents; and prompts the deportation of undocumented immigrants who have ever been charged or convicted of crimes, "abused the welfare program," are currently under deportation orders, or have ever misrepresented themselves to the government.

His executive order for the U.S.-Mexico border wall demands the hiring of 5,000 new border patrol agents and the construction or contracting of more detention centers located near the border. It also directs a variety of agencies to figure out the crucial details of the project, such as figuring out where the necessary funds should come from and starting on a plan for how to actually build it.

The Secretary of Defense is instructed to conduct a 30-day "readiness review" of "training, equipment maintenance, munitions, modernization, and infrastructure" of the military. Within the 30 days, Trump will receive a report regarding what changes need to be made to the department by 2019. The secretary will also need to work on budgets for the fiscal years of 2017 and 2018.

One of the most controversial executive orders to be signed yet. Trump's "extreme vetting" order suspends the U.S. Refugee Admissions Program for 120 days as well as the entry of "immigrants and nonimmigrants" from seven predominantly Muslim countries for 90 days. The targeted countries include Syria, Iraq, Iran, Sudan, Libya, Yemen, and Somalia.

During the suspension, Trump and his cabinet with attempt to "improve" the admissions process for refugees and travelers, and decide which countries will continue to be considered too dangerous to lift the the ban.

Despite repeatedly claiming to have a "foolproof" plan to defeat ISIS, Trump's executive order regarding the terrorist organization consists of asking everyone else in his administration to come up with a plan. In 30 days. It reads, "Within 30 days, a preliminary draft of the Plan to defeat ISIS shall be submitted to the President by the Secretary of Defense."

Steve Bannon, Trump's assistant and chief strategist, was granted a seat with the National Security Council by one of the president's executive orders. In addition, the Director of National Intelligence and the Chairman of the Joint Chiefs of Staff will now only attend meetings "where issues pertaining to their responsibilities and expertise are to be discussed."

One the president's most recent executive orders demands that executive branch officials not partake in any lobbying activity for the agency at which they worked for at least five years upon ending their employment.

Trump's latest executive order came on Monday, targeting regulation agencies. The order requires that any regulation an agency wants to impose on businesses — which he warned would most likely not be approved — be accompanied by the elimination of at least two other regulations.

And so far, these are all the actions Trump has taken in his quest to make America "great" again.