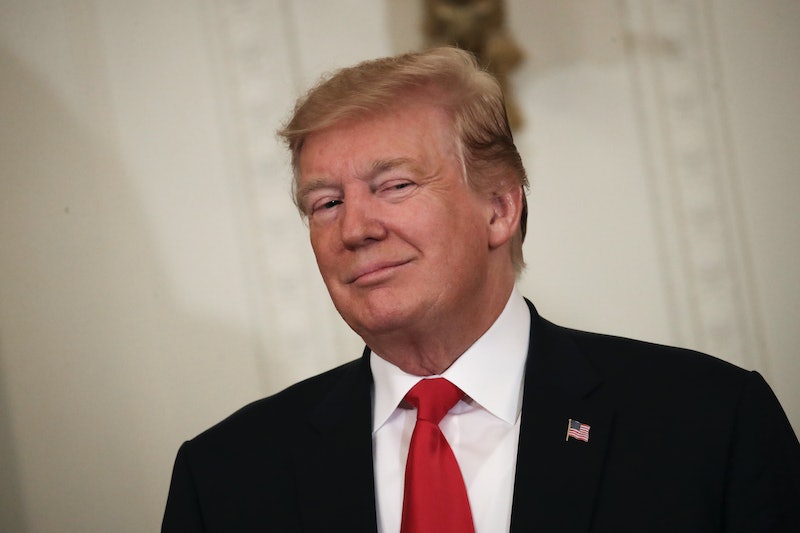 There's no doubt about it, being a world leader comes with a certain amount of prestige — namely, a lot. But does it pay? While President Donald Trump isn't the highest paid world leader, he's apparently not too far from the top, according to new rankings from USA TODAY's 24/7 Wall Street.

In compiling their rankings, 24/7 Wall Street converted the publicly available salaries of world leaders into U.S. dollars (using an exchange rate obtained on April 13, 2018). The outlet opted to exclude absolute monarchies like Saudi Arabia as well as constitutional monarchies where the highest ranking officials are authorized to appoint the government.

Of course, during the 2016 election, Trump famously vowed not to take the $400,000 salary that came along with the presidency if elected — a promise he appears to have upheld. "If I'm elected president I'm accepting no salary," CBS News reported he said during a campaign rally in Rochester, New Hampshire, in October 2015. "That's not a big deal for me, but..."

After his election victory, Trump clarified that he would take only what he was legally required to from his presidential paycheck. "I think I have to by law take $1, so I'll take $1 a year," he told Lesley Stahl during an interview on 60 Minutes in 2016. "No, I'm not gonna take the salary. I'm not taking it."

Since taking office, Trump has donated the money he earns as president to various organizations and government agencies. According to USA Today, he took the $100,000 he earned in the third quarter of 2018, for example, and gave it to the National Institute of Alcohol Abuse and Alcoholism.

The president went on to tell The New York Times he wasn't in it for the money. "You know, fortunately, I don't need money," the paper reported he said. "I love this job." Perhaps he's unconcerned then with how his salary stacks up to those of other world leaders.