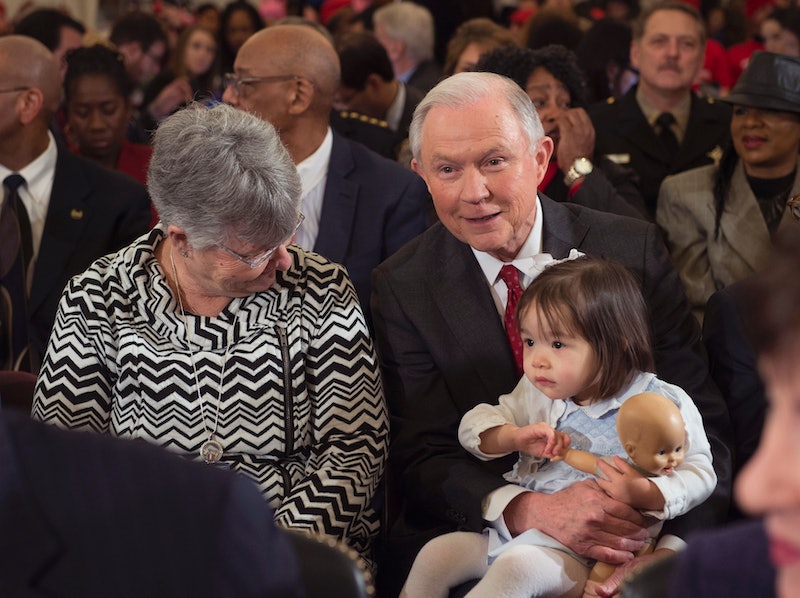 Reminiscent of the time 10-year-old Barron Trump amused everyone by looking bored and tired during his father's Election Day victory speech, Jeff Sessions' granddaughter looked thoroughly fed up during his confirmation hearing. Sessions brought four of his granddaughters — Gracie, Hannah, Joanna, and Phoebe — to witness his effort to convince the Senate Judiciary Committee to confirm him as attorney general. Sessions sat with either Phoebe or Joanna — it isn't clear who, since they are twins — on his lap prior to his being sworn in and beginning his testimony.

The toddler was notably fussy and loud, as would be expected. After Sessions began answering questions, the little girl sat behind her grandfather looking unhappy, and soon people on Twitter were commenting about how much they identified with her.

There were multiple interruptions during the proceedings as activists protested Sessions' stances on minorities, women's reproductive rights, marriage equality, and immigration. Sessions seemed to tone down how steadfastly he'd push his own views if he were to serve as attorney general. When grilled by Sen. Dianne Feinstein on whether he would uphold the Supreme Court's rulings on marriage equality and women's abortion rights, Sessions responded in the affirmative, vowing to respect both rulings as "the law of the land."

Some people were just a little skeptical, and the senator's granddaughter perfectly captured that sentiment.

1. Not Buying It, Grandpa

Given Sessions' opposition to hate crime laws, resistance to reforming the criminal justice system through bipartisan cooperation, support for the use of prison chain gangs (in fact, under his leadership in 1995, Alabama became the first state to resume using them after the laws were phased out following the Jim Crow era), and generally dubious history when it comes to civil rights and crime, one could be forgiven for not taking much comfort in this claim.

As she whined, cried, and yawned, it was pretty clear she wanted the whole thing to be over. Relatable.

Barron's first time being shamelessly bored was during his father's speech at the Republican National Convention. This little girl's Bored Child Relative debut is turning out to be just as funny.

4. This Could Be Referring To So Many Moments

Sessions said so many side-eye-worthy things (like how he believes Roe v. Wade "violated the constitution") that it's not immediately clear which one this tweet is responding to.

It's unfortunate when terrifying things like Sessions' confirmation are both important to pay attention to and yet unbearably dull.

6. At Least She's Giving Us One Good Thing

Having a cute little girl to cheer us up makes the experience a little less painful.

She can't stand the fact that Trump won, nor does she support his cabinet picks, but like most people, she still appreciates cuteness when she sees it.

Unfortunately, it looks like Sessions and the others in the room couldn't handle the truth his granddaughter was conveying, because she was eventually kicked out.