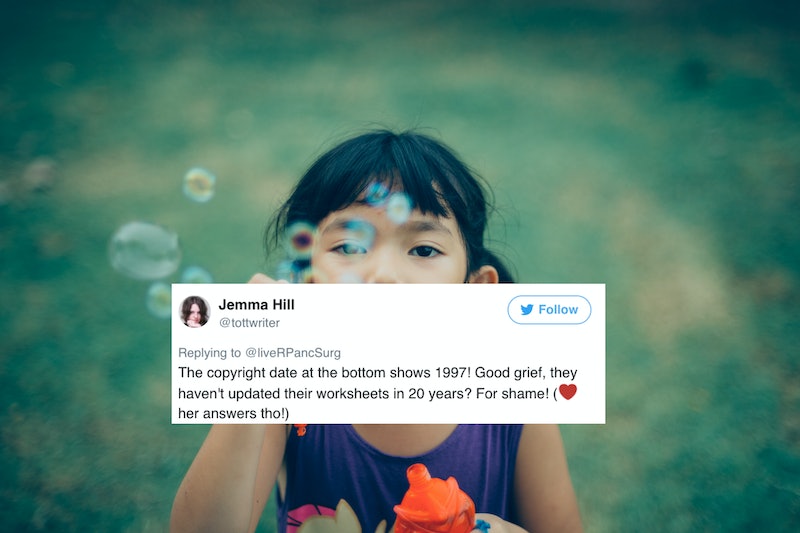 There's an old riddle that goes something like this: A boy is in the car with his dad when there's a terrible accident. The man dies, and the boy is rushed to hospital, but when he's wheeled into surgery, the surgeon says, "I can't operate on this boy, he's my son!" How is this possible? The doctor is the boy's mother — DUH — but the entire question is predicated on the wildly sexist assumption that women aren't meant to be surgeons. And while this idea may sound out of date, based on one young girl's sexist homework assignment, this particular gender bias is alive and well.

This week, a U.K. man named Robert Sutcliffe tweeted out a picture of his 8-year-old daughter's homework exercise about words containing the "ur" sound, like "purple," or "curly." The exercise sheet would describe the word, and the children would have to fill it in. For example, one question was "Day before Sunday," and the answer was "Saturday." Relatively straightforward. The first question, however, was "hospital lady," an awkward and strange prompt, because unless you're the person who came up with that old riddle, you know there are many, many positions women could hold in a hospital. Sutcliffe's daughter was unfazed though, and answered "surgeon." Next to her answer, the teacher wrote in red "or nurse."

It doesn't seem the 8-year-old was purposely making a political statement. As her dad wrote in his tweet, both he and the girl's mother are surgeons, so it was normal for her to assume "Hospital lady" (seriously, what is with that prompt) just meant a surgeon like her mom.

"8 year old daughter's schoolwork - check out Q1 #looklikeasurgeon#mummyisasurgeon (and so is daddy!)" Sutcliffe wrote. (Sutcliffe's Twitter account is private, but you can see a picture of the tweet here.)

Most Twitter users were frustrated by the question, but impressed by the girl's response.

"Neither actually fits," another user commented. "Surgeons and nurses can be both male and female. The answer is outdated and sexist."

Another woman pointed out just how outdated the homework sheet itself was "The copyright date at the bottom shows 1997! Good grief, they haven't updated their worksheets in 20 years? For shame! ( her answers tho!)"

While it's difficult to know where to start with this question (again, the phrase "hospital lady" is mind-boggling), two aspects leap to mind. First, the incident shows how badly many school materials need to be updated to reflect social progress. In a fast-changing world, where new information is more accessible than ever, some educators are even arguing against using textbooks, because they don't allow for much flexibility in responding to children's different needs. But whether teachers choose to use textbooks or not, at the very least they can find homework sheets that aren't 20 years old.

Secondly, the girl's answer underscores the importance of representation in different professional fields, not just of gender, but of race, creed, and sexuality as well. This little girl answered surgeon not because she was trying to highlight the sexist nature of the question, but because her mom's a surgeon, and she knows there are more kinds of "hospital ladies" than just nurses. Representation changes the narrative, changes perception, and changes whether or not children believe they too can pursue a career path. In a 2013 piece for the Guardian, Rebecca Brand referenced the popular phrase, "If she can't see it, she can't be it." Seeing more women in what have traditionally male roles empowers young girls to pursue those jobs.

Although there have been significant improvements, equal representation is still a ways off. Until then though, let's do our best to avoid sexist homework prompts like "hospital lady."