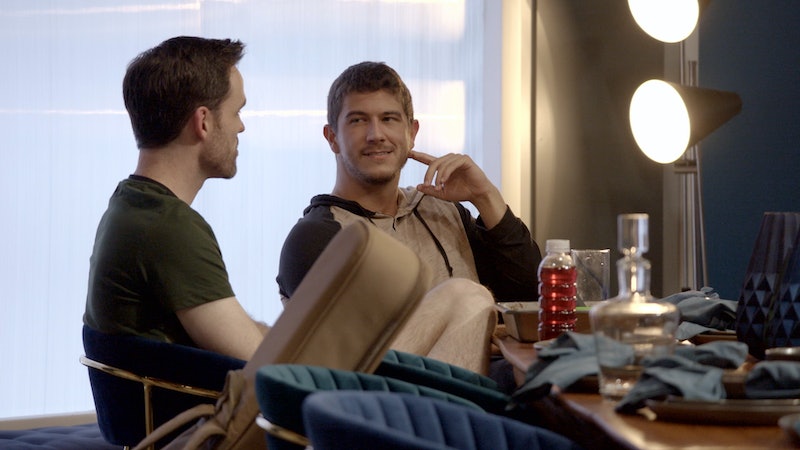 Netflix set out to conduct an experiment on their new reality show, Love is Blind, to test whether or not people could fall in love based on just an emotional connection — and unfortunately, it seems like their experiment worked a little too well. In a recent interview with the Los Angeles Times, creator Chris Coelen that Love is Blind didn't show every couple who got engaged, specifically mentioning fan-favorite Rory Newbrough, who popped the question to Danielle Drouin. (In a statement to Bustle, Netflix also confirmed that Westley Baer and Lexie Skipper also got engaged on the show, but their romance wasn't shown. They have since split, but remain friends.)

On Love is Blind, Rory has become something of a relationship guru, offering romantic advice to all of the other men who were trying to find "the one" through the show's signature experiment. All of that advice came from a good place, as Coelen revealed that the process worked out for Rory. "He got engaged to a woman named Danielle [Drouin], from the show," Coelen told the LA Times. "They were both in the facility, and they got engaged." However, despite the fact that Rory and Danielle "took a trip or two together and they tried to build a life together," according to Coelen, their romance ultimately didn't make the final cut.

Rory himself confirmed his engagement to Danielle in a February interview with Women's Health, and revealed that he "absolutely fell in love" with the Atlanta-based model. "Danielle was the first pod that I went into, and I felt it the second I walked in," he explained of his instant connection with his eventual fiancé. "She was my first choice the entire time." According to Rory, the pair had such a strong emotional connection that he "collapsed when I saw her," for the very first time, after their proposal, because he was so in love.

Despite their romantic love story — which included an emotional Rory reading his journal entries about how much he cared for Danielle, according to the interview — Rory knew that his relationship likely wouldn't make the final cut. "[The producers] were like, 'We were expecting one or two [engagements], not eight! We set up to film five!'" Rory explained, adding that after he and Danielle left the pods, they were sent straight back into the real world. "They just kind of gave us our phones back and said 'Good luck, thanks for joining us, but we just can't cover your story.'"

Though they went on a trip of their own to test their connection in the real world, Rory and Danielle's relationship "unfortunately ... didn't last that long" according to the Twitch streamer, although he later added that he has no regrets about the experience. However, according to Coelen, Danielle was actually a part of two successful Love is Blind couples, as she began dating Matt Thomas after her split from Rory. "There was a guy named Matt [Thomas] who is really only seen early on in the show," Coelen explained, who also formed a strong connection with the model. "[Danielle and Rory] ended up breaking up and then she started dating Matt."

While Coelen didn't reveal whether or not Danielle and Matt are still together, the couples who were cut from Love is Blind prove that Netflix's experiment really does work — it just worked a little better than expected.

More like this
‘The Ultimatum: Queer Love’ Is Officially On The Way
By Radhika Menon and Kadin Burnett
These IG Clues Seem To Confirm Sal & Jessi’s Relationship Status After 'Love Is Blind'
By Grace Wehniainen
Shaina & Christos Explain How 'Love Is Blind' Led To Them Getting Married
By Grace Wehniainen
Here’s When You Can Expect More ‘Indian Matchmaking’
By Brad Witter
Get Even More From Bustle — Sign Up For The Newsletter