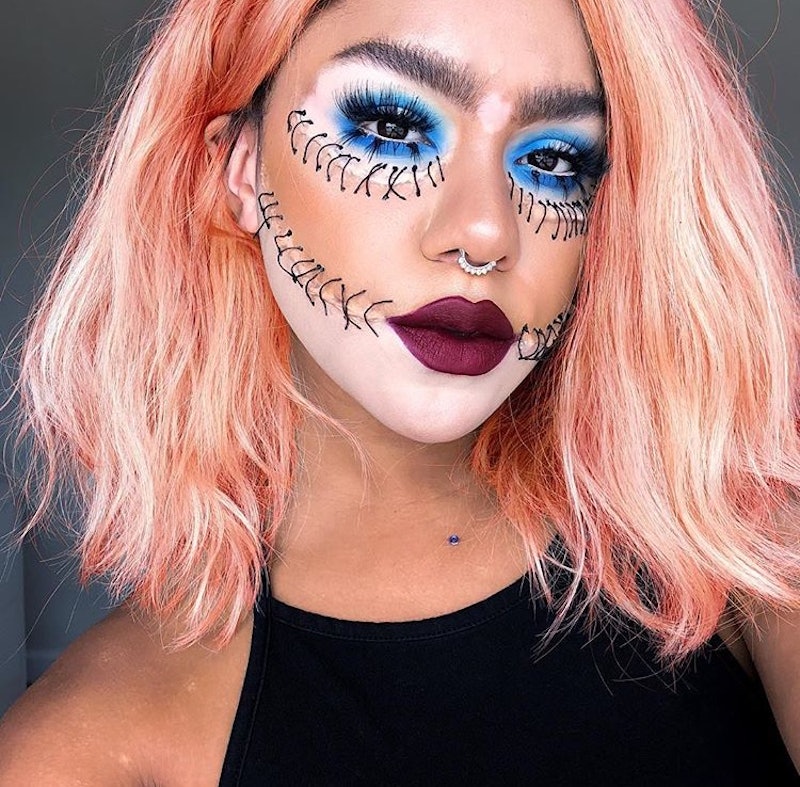 With Halloween approaching, there is certainly no shortage of makeup tutorials out there to help you get some inspiration. Chicago-based makeup artist Lauren Elyse, however, takes things up a notch. With the recent influx of Pennywise makeup tutorials moderately overwhelming, Elyse offers a change of pace and some empowerment all in one.

In her tutorial Elyse turns herself into Sally, the eerie rag-doll from The Nightmare Before Christmas. In Tim Burton’s classic film, Sally is a humanoid rag-doll that Dr. Finkelstein creates and keeps under lock and key. Sally costumes are already on the shelves, but Elyse doesn’t need a costume to transform herself into Finkelstein’s creation. She used her makeup talents to get the job done — and embraced her vitiligo in the process.

Instead of using concealer to cover up her symmetrical patches of vitiligo, Elyse played up her skin condition by using the natural patches on her skin as patchwork to look like a living rag doll.

In case you aren’t familiar with vitiligo, it’s a skin condition that occurs when the cells that produce skin color are destroyed, causing patches of skin to become white. While vitiligo is more noticeable in darker skin tones due to the contrast of the light patches, anyone can be affected by the condition which currently includes about 50 million people according to sources at Vitiligo Support International.

Elyse tells Allure that she was able to achieve her spooky Sally persona by using 3rd Degree, a silicone modeling paint, to create an illusion that her skin was cut up and sewn together. She then added Revlon’s Flawless Creator Pigment Drops on the bottom part of her face and applied foundation to set the look.

According to Elyse’s Instagram post, instead of filling in her eyebrows she opted for a 24-hour brow setter from Benefit Cosmetics. Her powerful eye includes "Doom” from the Kat Von D Pastel Goth Eyeshadow Palette and "Glacier" from the Kat Von D Shade + Light Glimmer Contour Palette, which were blended together with Sugarpill’s Ghosted Loose Shadow and Velocity Pressed Eyeshadow. On her cheeks, Elyse used Sugarpill's Flamepoint Pressed Eyeshadow for added effect. Her bold lip is a delicious matte red — Carnivorous by MAC.

Elyse was dead-set on using real thread to complete her look. To get a real-life effect, she used hair bonding glue to hold the thread across each side of her cheeks. The end product is wow-worthy.

Now a popular makeup artist at Erskine Reeves Salon, Elyse is quick to point out she wasn’t always confident especially at the onset of her vitiligo, which began on her knees. But after embracing her natural beauty, the very thing that she once worried would detract beauty clients, her 300,000 followers are constantly begging for more.

Call it a lesson in loving yourself unapologetically. Try beating this makeup look this Halloween.