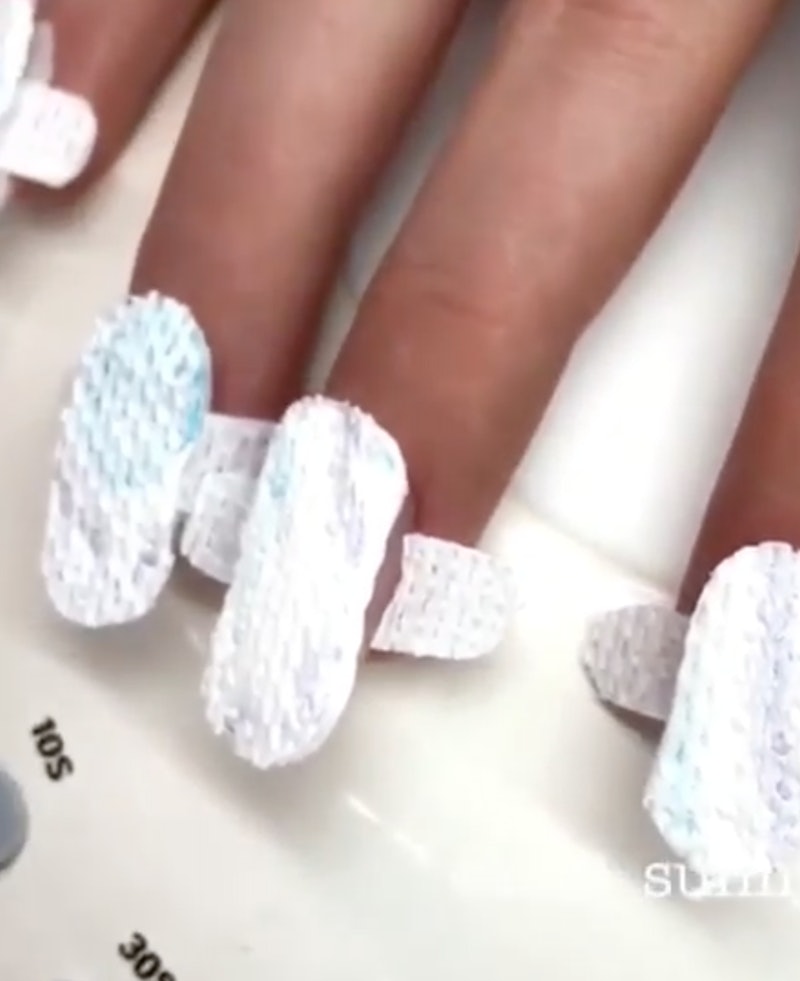 Nail Sunny may have outdone itself. The salon touts itself as the No. 1 nail art chain in Russia in its Instagram bio, which counts 2 million followers. The reason Nail Sunny has become so popular on its home turf and beyond is its unusual nail looks. The maxi pad manicure might be Nail Sunny's most outrageous, head-turning, and incredibly extra creation yet.

Remember, Nail Sunny has created a functioning Starbucks coffee cup, cheese grater, and MAC makeup brush nail art in the past. Those nails looked cute and creative — and they worked. You could sip coffee from the Starbucks mani, while the cheese grater actually grated cheese. The makeup brush mani was basically mini tools that applied eyeshadow — expertly so. Some fans and followers expressed concern about the hygiene factor of such manicures. But the manicures are meant to be fun — not to actually replace your latte, kitchen aids, and/or makeup tools.

The maxi pad manicure was not functional like the aforementioned nail art. It cannot be used for any intended purpose. That said, the nail tech's creation looked incredibly realistic.

The mini max pad mani — say that 10 times fast — was fashioned from an actual, fresh pad. The tech then "designed" it to look as though it were used.

Are you ready for "pad nails," as Nail Sunny labeled 'em in the caption of the Insta post?

While the maxi mani might cause some people to scratch their heads or might be a little too subversive for others, it's also an expression of art. It may be nail art, but it's art nonetheless. It's totally OK if it's not for you and if you're not here for it, though.

The tech fashioned the manicure from an actual, brand new pad.

The fabric was then attached and fitted to each nail.

Many maxis have adhesive wings, which help them attach to panties. Like so.

It was shaking out to be a pad per nail.

You can totally tell what it s from this vantage point.

The tech then added some red color to the pad, taking this manicure to an entirely extra and next level. As such, period nails were born.

The addition of color was certainly an IRL touch.

Followers and viewers did not hold back in the Insta comments. Many had understandable "WTF?" reactions. Others were confounded by the idea.

As with anything in life, the internet had opinions. Lots and lots of opinions.

This was a legit question, sure.

Not everyone was anti.

However, this user posted something that resonates. There were plenty of dramatic overreactions — or "ovary-actions," as someone said — to this manicure. This user reminded us that periods are a normal, every day fact of life, are a part of a woman's experience, and that haters should calm down.

Sure, this miniature maxi pad manicure isn't for everyone and might cause some to cringe. But you can't deny that it was certainly a unique take on nail art. But EOD, it is just a manicure...