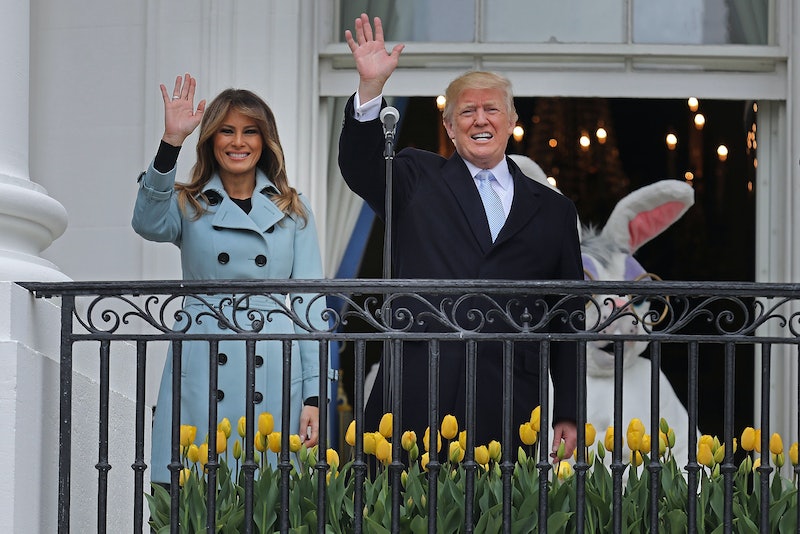 It's probably one of the most visually captivating and intricately designed Easter eggs you've ever seen. A 2019 commemorative Easter egg for Melania Trump, touting her "Be Best" campaign motto, was recently revealed at the White House, just a few days before the White House Easter Egg Roll. The American Egg Board will officially present the commemorative Easter egg to the first lady on April 22, according to CBN.

Now, as mentioned before, it's not just any egg. This commemorative Easter egg bears the official title of Trump's youth wellness program, Be Best. With multiple turquoise swirls, various colored flowers, and the logo in rather decorative cursive handwriting, it certainly looks like a special egg. It's also nestled in what appears to be a golden encasing at the bottom.

In case you didn't know, Trump's Be Best campaign took off in 2018 as an effort to improve the collective mental, physical, and emotional health of young American people. According to the White House, Trump explained her vision: "It remains our generation’s moral imperative to take responsibility and help our children manage the many issues they are facing today, including encouraging positive social, emotional, and physical habits."

It's that particular initiative that Trump's commemorative Easter egg gives a shout-out to. And here's what it looks like.

For some people, it may be peculiar to see that the American Egg Board is planning to present the decorative Easter egg to Trump. But this presentation — and the work that goes into crafting the perfect egg — is part of a tradition that has been taking place since 1977. As Food Sided noted, the American Egg Board has been presenting the White House with various commemorative eggs on Easter for years now.

In fact, in 2018, Trump was presented with that year's commemorative Easter egg, which was dubbed "Wings of Prayer." At the time, Business Insider reported that the American Egg Board was inspired by Trump and stated that her "elegance comes to life in the ornate nature of the design, which is adorned in rhinestones."

Just like the 2019 egg, the 2018 Easter egg was bejeweled and vivid. Not only did it have rhinestones, it also bore light green and pink glitter, and an encasing that flung open like wings. Perhaps the most notable part of the 2018 commemorative Easter egg was the contents inside of it. If you opened the egg, you could see a miniature version of the first lady and President Donald Trump waving at their onlookers.

So, what is the thought process behind decorating a commemorative Easter egg for the first lady? Apparently, a lot goes into it. An American Egg Board spokesperson told Business Insider in 2018: "Previously, Commemorative Eggs have reflected the passions and public interest of America's first ladies and their respective favorite pastimes, like reading, and personal color preferences."

Based on that description, it looks like the 2019 Easter egg for Trump is all about her educational and motivational youth wellness efforts — with just a hint of color.