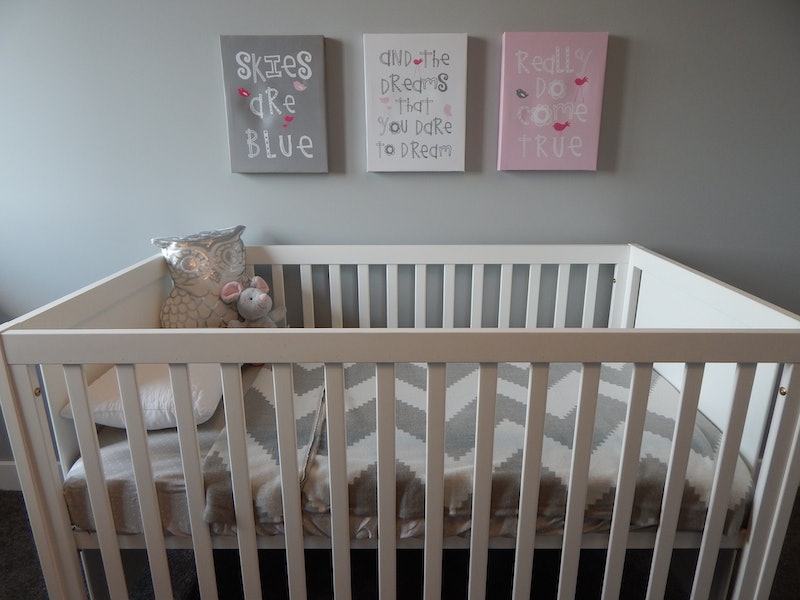 Even with seasoned parents, apparently innocuous items can turn out to be dangerous to an infant. That's the message one bereaved mother wanted to get across in a Facebook post explaining her son's sudden death on Jul. 3. Jordan DeRosier announced the loss of her "sweet rainbow warrior" in a touching Facebook post that morning, leaving the circumstances of his death unspoken for the time being. However, anti-vaccine activists quickly came out of the woodwork to suggest that vaccines — a form of preventative medication that has saved millions of lives — were to blame. The next day, DeRosier took to Facebook again to explain that no, her son's passing had nothing to do with vaccines. Instead, it came down to a simple blanket left in his crib.

On Tuesday's post, which features a picture of her crying next to her other son, DeRosier began by asking critics to stop bringing up vaccines. "Initially I had not wanted to explain the detailed circumstances of his death because of my guilt and the fear of condemnation from others," she wrote. "But I will not allow anyone to try and place blame where it does not belong."

She went on to reveal the truth of what happened on Monday morning:

He was last laid down to bed with this blanket made by his great-great grandmother, and one other blanket, a grey one he had been attached to since birth. They took the grey one he had been found with his head in. He had pulled it through the crib rails somehow and gotten himself stuck in it.

According to a separate, later Facebook post, DeRosier was the one who found Sloan that morning. Mere hours later, her son was pronounced dead. In Tuesday's post, she begged parents to remain vigilant. "Please do not put your babies to bed with a blanket. Please. He was 7 months old," she wrote. "I thought because he was crawling, standing on his own, and climbing, that he would be fine with a blanket."

You can read the heart-wrenching post in its entirety on Facebook, where it has been shared more than 12,000 times. The comments section has been flooded with messages of support, with nary an anti-vaccine message to be found now. Friends of the family have also set up a fundraiser to support the DeRosiers.

To reduce the risk of accidental suffocation, the National Institutes of Health (NIH) recommend against soft bedding like pillows, blankets, or sheepskins in a baby's sleep area. Their website also states that infants should be put to sleep on their backs on a "firm sleep surface."

As far as vaccines go, the Centers for Disease Control (CDC) writes that vaccines are quite safe, and they can protect against deadly diseases like polio or yellow fever. Despite widespread beliefs, vaccines don't cause autism — that link has been thoroughly debunked numerous times.

"Every year, tens of thousands of Americans get sick from diseases that could be prevented by vaccines — some people are hospitalized, some even die. Immunization is our best protection against these diseases," reads the CDC website. However, vaccines don't eradicate the germs themselves, so it's still possible for non-vaccinated people to catch preventable diseases.

On top of being insensitive, accusations that Sloan's death was caused by vaccines are unfounded. Although speaking out must have been painful, other parents will be able to learn from her experience. That's worth something.