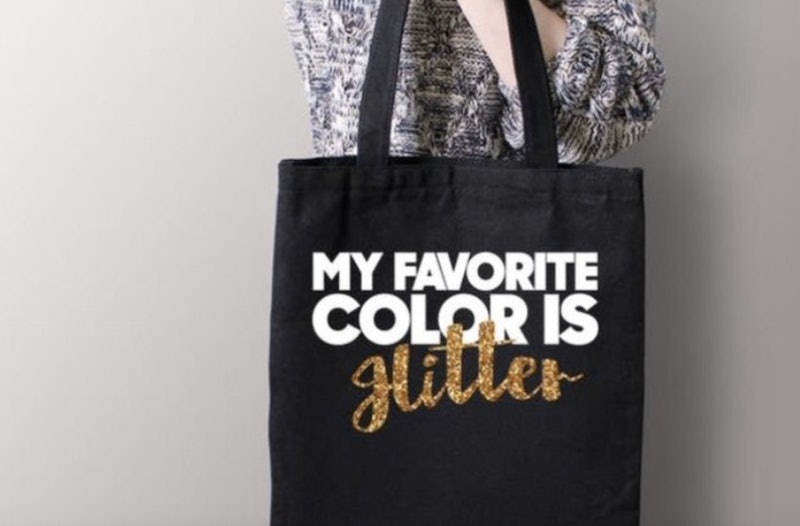 Everyone loves totes, just not ones with the names of racist dictators on them; and that is precisely what happened with this "My Favorite Color Is Glitter" tote bag that appears to say "Hitler," all because of the font used. Honestly. I can't make this stuff up. The original bag was made by Quotable Life and is sold by BelleChic; and aside from this egregious error, it's pretty darn cute. The quote is catchy and witty, and sure enough, "glitter" is written in, well, glitter. Except... except... it definitely looks like "Hitler," and that just makes my soul hurt.

Of course, the people of Twitter chimed in with all sorts of opinions, as the people of Twitter so enjoy doing. Surprisingly (to me, anyway), many people jumped to BelleChic’s defense, arguing that it definitely does not look like “Hitler,” and it’s clearly two Ts and not “tl,” so if anything, it looks like “Hitter.” Which is still not “glitter,” I’d like to point out.

I don’t mean to hate on the bag. I do find it pretty adorbs. I’m simultaneously wondering, though, how many people saw this before it went into production, and not one — not a single one — said, “Damn, does anyone else think that looks like Hitler?”

Judge for yourself. Here’s the original.

Mistakes happen; and wanting to make things right, Matt Mollen, Chief Marketing Officer for BelleChic, has confirmed that the original bag was removed from the site and replaced with a new design. "While I realize that most of the social media buzz and commentary has been tongue-in cheek, the type of abhorrent sentiment conveyed as part of the misinterpretation absolutely does not align with our company values, nor is it something we would ever want to encourage or support," he says to Allure. He also pointed out that the original bag was listed on their website for over a year, and nobody ever said anything negative about it.

Where have we been?!

Still cute, and two thumbs up for the new font. Of course, Twitter still had its opinions.

More like this
Why TikTok Is Flooded With Controversial Videos About "Pick Me Girls"
By Courtney Young
This TikTok Song About An Unrequited Romance Has FYPs In Shambles
By Emma Carey
Why Everyone Is "Soft Tagging" Friends On Instagram Right Now
By Alexis Morillo
On TikTok, Tinned Fish Date Night Is The Latest Viral Food Obsession
By Emma Carey
Get Even More From Bustle — Sign Up For The Newsletter