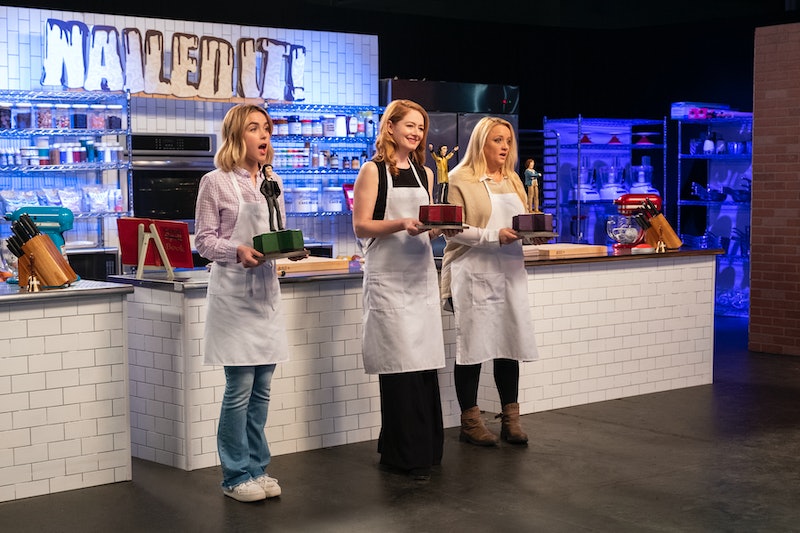 To become a full fledged member of the Church of Night, you need to undergo a "dark baptism," but in order to win Nailed It!, you have to do something even more challenging: bake and decorate an elaborate cake. The cast of Chilling Adventures of Sabrina competed on Nailed It! for a mini-episode, and based on the way that stars Kiernan Shipka, Miranda Otto, and Lucy Davis fared, it seems as if baking is even scarier than anything the Dark Lord could concoct.

To celebrate the third season of the cult-favorite Netflix baking show — which premiered on the streaming service on May 17 — host Nicole Byer and judge Jacques Torres challenged the three CAOS stars to "conjure up" three elaborate cakes centered around three of the show's most handsome male stars. "You've got Sabrina's charming boyfriend, Harvey Kinkle, the tall, dark, and handsome warlock Nicholas Scratch, and the Dark Lord — ooh, baby, it's Lucifer!" Byer said, showcasing the three sweet treats, which featured edible models of the trio of heartthrobs on top of pentagram-shaped cake bases — intricate figures the actors were tasked with recreating.

While Otto stayed true to her character, Zelda, by bringing in a hammer — in case her onscreen sister got "out of line," she joked — and choosing Lucifer for her cake, it should be noted that Shipka chose Nick Scratch (Gavin Leatherwood). Could this be a clue that Sabrina and Nick are endgame?

Of course, if Shipka's cake is any indication, things might not end so well between Sabrina and Nick, as the actor's interpretation of the moody love interest came out as "warlock SpongeBob" in her words. "It's a magic cake, because it's in motion," the actor joked as she, Byer and Torres watched the cake figurine slowly fall, face first, off of the cake and onto the table.

Sadly, the other part of Sabrina's central love triangle didn't fare much better: Harvey (Ross Lynch), as created by Davis, was already falling over before she even unveiled her creation. "This is the wildest looking human being I've ever seen," Byer told the actor behind Aunt Hilda. The host then joked that, despite bringing in a box mix to help her out, Davis' cake "turns to paste in your mouth." Clearly, no amount of magic (or help from a box mix) could help these witches through the many challenges that come with baking.

Now that the cast has survived the trials of Nailed It!, it seems likely that they will be ready to handle all of the twists, turns, and terrors that will come with Part 3 and Part 4 of The Chilling Adventures of Sabrina. While most details about the upcoming installments have been kept under wraps since the show was renewed back in December, this Netflix crossover could be a sign that CAOS is ready to collaborate with another famous show.

CAOS and Riverdale creator Aguirre-Sacasa has been teasing a possible crossover between Sabrina and Riverdale for a while now. "I think it would probably be easier if maybe the Riverdale kids go to Greendale," Aguirre-Sacasa told told Collider in 2018. "On a dare, they could go spend the night in a haunted house. But I could also see the universe where Sabrina is like, 'I want to be mortal. I don't want to be a witch. I'm gonna transfer to this school, Riverdale High, where everything is surely gonna be normal and I'll be a normal kid.'"

Now that Shipka, Otto, and Davis have already starred in a crossover event with another Netflix show, it really does seem like a matter of time before the Sabrina cast makes an appearance on some other, equally marathon-worthy TV shows.

More like this
Nicola Coughlan Shared A Lady Whistledown Excerpt From ‘Bridgerton’ Season 3
By Grace Wehniainen, Alyssa Lapid and Sam Ramsden
What’s New On Netflix: Ana De Armas’ 'Blonde' & A Nick Kroll Special
By Arya Roshanian
Here’s Everything Coming To & Leaving Netflix In October
By Jake Viswanath
The 'Bachelor In Paradise' Schedule Shifts To 4 Hours Every Week After The Season 8 Premiere
By Brad Witter
Get Even More From Bustle — Sign Up For The Newsletter