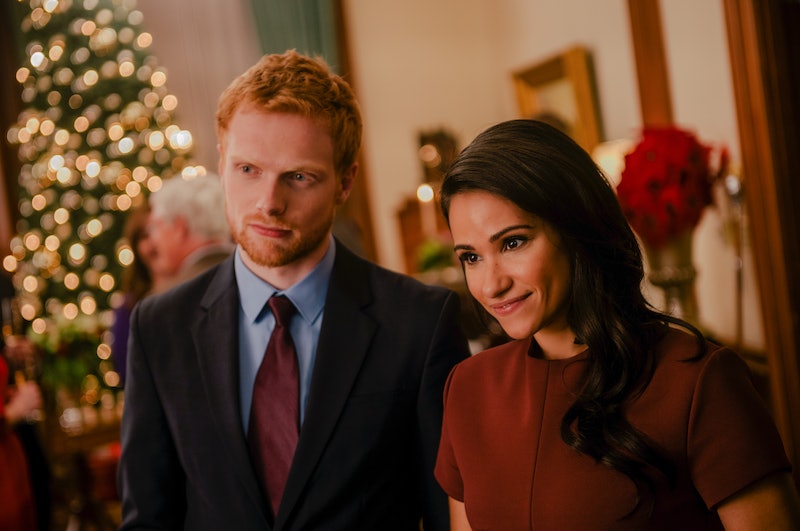 Ever wonder what goes on behind the closed palace doors? Well, judging from a newly released clip, the upcoming Prince Harry and Meghan Markle Lifetime movie, Harry & Meghan: Becoming Royal (premiering May 27 at 8 p.m. ET), will attempt to give it a pretty dramatic guess. Promising to go "beyond the fairy tale," here's how the network is describing the film:

"The sequel to the 2018 hit movie [Harry & Meghan: A Royal Romance] continues the love story of newlyweds Prince Harry (Charlie Field, Genius) and American actress Meghan Markle (Tiffany Smith, Supernatural), pulling back the curtain to reveal the untold joys and challenges of life inside the Royal Family during their pivotal first year of marriage. Beyond blending their families and cultures, Harry and Meghan’s core values are put to the test as they try to find the balance between honoring Royal tradition and staying true to their beliefs."

As seen in the sneak peek, one emotional event the filmmakers will dramatize in the upcoming flick includes an imagined phone call between the Duke and Duchess of Sussex and Thomas Markle ahead of their May 2018 royal wedding.

In the clip, an emotional Meghan tells her father (on speakerphone, of course) that she and her husband-to-be had heard that he had a heart attack through the tabloids. Mr. Markle insisted it was just heart palpitations caused by fatty arteries, noting his daughter always used to nag him about eating healthier.

But since she'd already broached the topic of "the tabloids," Meghan uses it as an opportunity to address the fact that he "did stage those photos."

In case you forgot, that part was actually based in reality. In the days leading up to Harry and Meghan's wedding, Mr. Markle reportedly worked with photographers to stage a series of "candid" photos showing him performing pre-wedding tasks, including getting fitted for a suit and even browsing the internet for pics of his daughter. Meghan's half-sister, Samantha, later took responsibility, per the Daily Mail.

His dramatized explanation in the movie? "Samantha thought it would be a good idea to have the paparazzi take some staged pictures of me so I could look better in the eyes of the public," he says.

That's where Harry decides jump in. "Talking to the paps, getting paid by the paps is not the answer, Tom," he tells his future father-in-law. "If you'd listened to me, none of this would have happened."

The conversation quickly goes south. "Fine," Mr. Markle hisses. "Well, maybe it'd be better for you guys if I was dead! That way you could pretend to be sad." Click

"Did he just hang up on us?" Meghan asks Harry, before promptly — and tearfully — storming out of the room.

Of course her Prince Charming (literally) follows his bride-to-be outside, and, after she tells him she's not sure she can "do this" and doesn't want to "walk down that aisle alone in front of 2 billion people," Harry reminds her that the wedding is not about her father or the gossip writers. "It's about you and me," he says.

After launching into a speech about having the "worst moments" of his life play out in the news and on TV, Harry ever-so-romantically tells Meghan that they're going to get through this: "I love you and you love me. And that's all that matters. Right?"

And they lived happily ever after — though, in real life, Meghan's father did not attend the wedding, where Prince Charles (played in the Lifetime movie by Charles Shaughnessy, AKA Maxwell Sheffield from The Nanny) ultimately escorted her down the aisle.

In addition to fictional movie, per a press release, Lifetime will also soon premiere two unscripted specials. Meghan’s New Life: The Real Princess Diaries will debuting on May 19, followed by Meghan & Harry: Baby Fever, which will air on May 27.

Royal (TV) watchers certainly have plenty of Meghan and Harry content to look forward to this month.

More like this
Here’s Everything Coming To & Leaving Netflix In October
By Jake Viswanath
Helen Mirren Reacts To Queen Elizabeth II’s Death After Playing Her 15 Years Ago
By Grace Wehniainen and Radhika Menon
Here's When 'The Crown' Season 5 Will Premiere — And What To Expect
By Bustle Editors
What’s New On Netflix: Meet 'The Real Bling Ring'
By Arya Roshanian
Get Even More From Bustle — Sign Up For The Newsletter