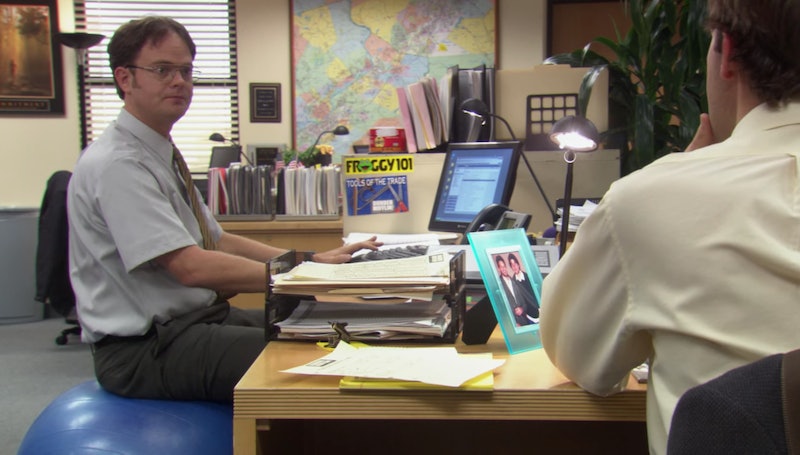 The Office bloopers normally end in uncontrollable laughter among the cast and crew, which makes it pretty impressive that a few have actually ended up in episodes. For example, a famous Season 2 Office cold open with Jim and Dwight was actually a total accident. But as Jenna Fischer and Angela Kinsey revealed in their Feb. 5 Office Ladies podcast episode, the blooper was just too good not to include.

Episode 8, "Performance Review," opens with Dwight sitting on a yoga ball instead of his normal desk chair, explaining to Jim the pros of using a fitness orb, all while bouncing around and making heavy breathing sounds. The opening ends with Jim puncturing the ball with scissors, popping it immediately, and making Dwight fall straight to the floor. But, believe it or not, the ball was never supposed to pop.

Fischer and Kinsey explained that the ball was supposed to slowly deflate with Dwight still sitting on it as Jim gave his typical smug look to the camera. However, actor John Krasinski accidentally hit the seam of the ball, resulting in the cold open fans know and love.

Per the podcast, 17 fitness orbs were purchased for the scene. Three of them were used for Krasinski to practice with, and a handful were used for takes that went relatively smoothly with the ball slowly deflating, sending Dwight on a slow ride down. But Krasinski's streak ended with the final ball. "On that last take, John hit the seam and you can see the shock on Rainn's [Wilson] face," Fischer said. "We were all completely shocked."

What makes the scene even better is that you can see just how shocked the actors are. Before lunging out of the shot, Krasinski covers his mouth and, if you turn the volume up, you can hear him, through stifled laughter, say, "What?!" In a 2007 interview with Esquire, Krasinski even called this prank one of the best. "I was supposed to puncture it, and it was supposed to slowly deflate, but on the eighth take I hit the seam of the ball, and it just ripped open," he said. "He fell down and hit his head."

No wonder the moment almost didn't make it to air. Per Fischer and Kinsey, writer Larry Wilmore (also known as Mr. Brown from "Diversity Day") fought to use this take as the cold open. Fischer said it best: "He fought for that and he was right."