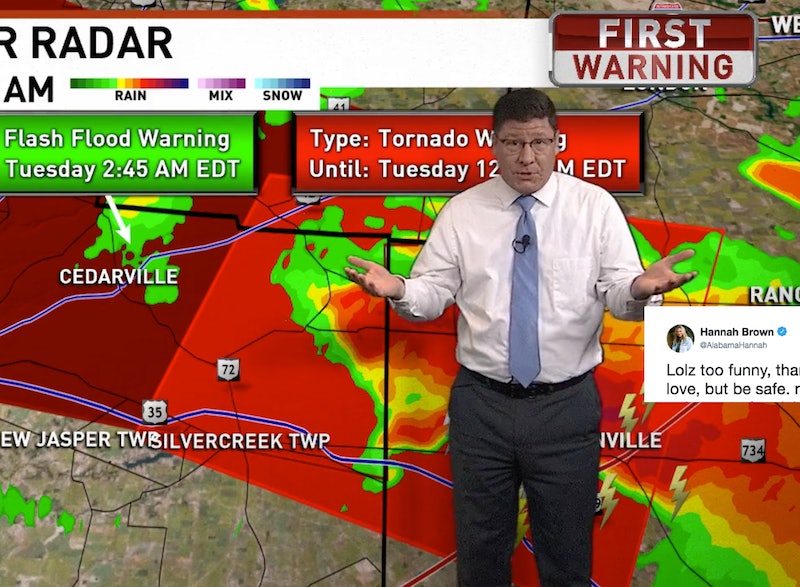 The metaphors for how The Bachelorette often resembles a tempestuous storm became a little bit too literal on Monday, May 28, for midwestern viewers as a tornado warning interrupted the ABC show at around 9:30 p.m. EDT. Bachelorette fans weren't too happy that their beloved show got cut short during the weather emergency airing in Dayton, Ohio. Meteorologist Jamie Simpson got wind of negative social media reactions to the interruption on Fox 45 Dayton and the Ohio weatherman's Bachelorette rant scolded viewers for complaining about the interruption live on air.

In the middle of the tornado warning, Simpson's voice could be heard from off-camera as he said, "I was just checking social media, we have viewers complaining already, ‘Just go back to the show.’" Then Simpson walked back into frame and started gesticulating while yelling, "No, we’re not going back to the show! This is a dangerous situation, okay? Think if this was your neighborhood. I’m sick and tired of people complaining about this. Our job is to keep people safe and that is what we’re going to do." He went on, seemingly responding to critiques that he was interrupting the show for his own benefit. "Some people complain this is all about my ego: Stop. Okay, just stop right now. I’m done with you people. This is pathetic. This is a dangerous situation here."

Simpson quickly followed up to apologize, saying, “All right. I’m sorry I did that. It just really bothers me there are people who don’t care about other people’s safety around here,” he said.

A Weather Channel report confirmed that Simpson's frustration was warranted given the seriousness of the tornadoes that cause massive destruction across Ohio and Indiana on Monday night. "Simpson's refusal to go back to regular programming may have saved lives after a powerful tornado slammed the Dayton area later that evening," The Weather Channel report stated.

Tons of angry fans took to Twitter, too, to express their fury over the Bachelorette being cut short.

The Bachelorette lead Hannah Brown responded to a since-deleted tweet about the on-air eruption, telling fans of the show to heed Simpson's warnings. "Lolz too funny, thanks Dayton, Ohio for the love, but be safe. naders are no joke," Brown tweeted on Monday night after the video Simpson's on-air outrage went viral.

Fortunately, some Bachelorette fans don't have to worry about catching up on Monday's episode that they missed due to hours-long coverage of the tornados ripping through the midwest. Indiana's The Indy Channel reported that Monday night's Bachelorette would re-air on the channel RTV6 on Tuesday, May 28 from 3 p.m. to 5 p.m.

Of course, the Monday night weather warning that interrupted The Bachelorette was less important than people's safety, and it's likely that the fans on Twitter complaining about the tornado alerts were exaggerating their irritation as a joke. But then again, Monday night's Bachelorette was a lot more eventful than most previous episodes of the season, so perhaps those angry tweets weren't all hyperbole. Nothing that happened on the intoxicating dating show was worth putting people's safety at risk, though, so Simpson's plea to fans to take his meteorologist reporting seriously has made him an Internet hero. Give him a rose, Hannah, he deserves it.