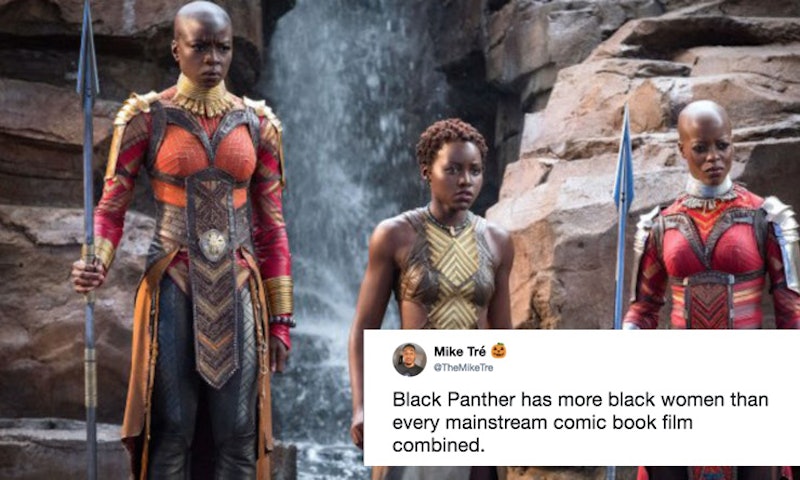 If you thought the teaser trailer for the Wakanda-set movie was amazing, just wait until you see the full-length Black Panther trailer that dropped Monday morning. Women of color everywhere collectively lost their edges and then some as they marveled (see what I did there?) at the promo clip for the highly anticipated film set to make it's debut February 16, 2018. But, as this Black Panther tweet shows, it wasn't just because Michael B. Jordan was standing shirtless surrounded by fire that we lost our minds. Black women were in awe because it was one of the first times that we really saw ourselves front and center in a major superhero film.

When the trailer was released, Twitter was set ablaze with fans — new and old — posting happy GIFs and memes, making theater carpooling arrangements, and planning out their release day outfits. Within the sea of praise, one tweet stood out the most, and it completely summed up why this story about the kingdom of Wakanda is especially important to women of color. Simply put: It's giving us representation like we've never had before. And being that there are so many "blerds" (black nerds) out there, it's about damn time.

Directed by Ryan Coogler, Black Panther is the first Marvel film to feature a predominately black cast. Now, if you're a fan of superhero flicks, then you already know that the amount of people of color in them is slim to none — and women in particular are underrepresented. It literally took 75 years for Wonder Woman, a white woman, to finally get her own feature film, which meant the chances of seeing so many combat-fighting, sword-slinging black women dominating in the superhero universe all in one movie was pretty much a pipe dream until Black Panther came along.

The new trailer gives us a better look at the world of Wakanda, where T’Challa (Chadwick Boseman) takes his place as the newly crowned king. We see his rival Erik Killmonger (the previously mentioned shirtless Michael B. Jordan), as he attempts to dethrone Black Panther. Additionally there are African-inspired costumes, slow-mo action shots, and fierce struts from the cast as if they're walking down a utopian runway.

But one thing sticks out the most in the 2:18 second clip: Mixed into to the smorgasbord of black men, the trailer sheds a spotlight on badass black women doing some equally badass things. From the Queen, played by the legendary Angela Bassett, to the Wakanda’s all-female special forces unit, the Dora Milaje, black women play a large role in this superhero story. And they're black women of all shades.

There’s something to be said about a strong male lead who relies on a team of fierce-fighting black women for protection. This is an especially great thing to see at a time when Hollywood is still so slow in incorporating more gender and racial diversity in films and TV shows. Unfortunately, as minority men and women gain traction in this genre specifically, backlash rears its ugly head.

For example, in The Flash, a CW show based on a DC Comics hero with superhuman speed, Iris West (played by Candice Patton), is a journalist and love interest for the titular superhero. Patton has been a constant target of racist discussion amongst the fandom community, with comments referring to her character as a "monkey" and more. Saturday Night Live writer and Ghostbusters star Leslie Jones faced similar criticism for starring in reboot of the beloved 1980s franchise last summer. Nude pictures were leaked without her consent, her website was hacked, and a quick click of a finger on Twitter revealed plenty of nasty, racist comments. In both cases, the reason for the hate is clear: seeing WOC inserted into a geek fandom is somehow threatening.

Black Panther isn't without criticism either. The movie poster was slammed as being "too black and too militant" by critics comparing the titular star's stance to a famous picture of Huey P. Newton — co-founder of the Panther Party — holding a gun and spear. (This was even though Black Panther isn't holding any weapons on the poster.) With this new trailer now out in the world, one can only imagine what sort of other ignorance will float to the surface. But, as former First Lady Michelle Obama once said, "When they go low, we go high."

Black women are done occupying space in superhero films as nothing more than props — if we're even in the film at all. Thanks to Black Panther, we finally get the representation we've been looking for, and, for that reason, we couldn't be more excited to see this film. Now excuse me while I go blast "Formation" while working on my Dora Milaje costume for premiere night.

More like this
Everything You Need To Know About ‘Black Panther: Wakanda Forever’
By Bustle Editors
Lego Just Announced Its 'Black Panther' Set Release Date
By Maxine Harrison
A New Scooby-Doo Movie Confirmed Velma Is Gay & Twitter Is Pumped
By Radhika Menon
Christian Bale Sang With Taylor Swift & His Daughter Can't Believe It
By Radhika Menon
Get Even More From Bustle — Sign Up For The Newsletter