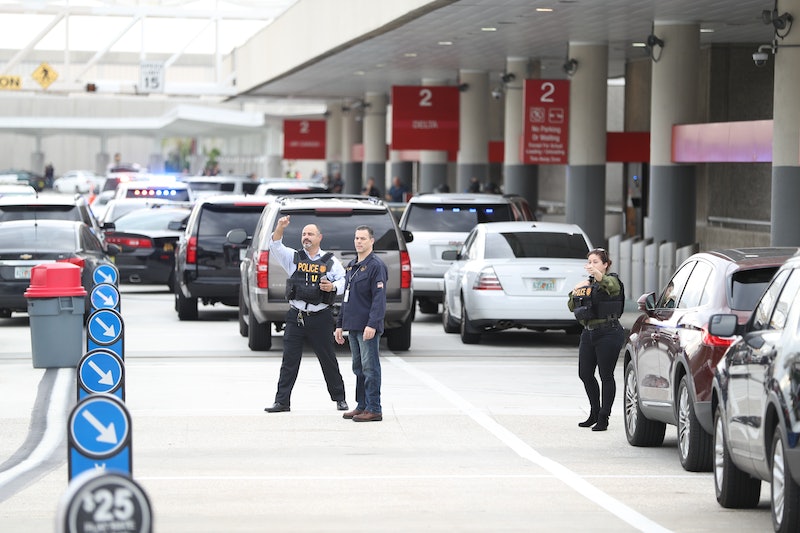 Shortly after the Fort Lauderdale-Hollywood airport shooting, during which five people were killed and at least eight people were injured, a number of Twitter users began speculating about the identity of the shooter. Among these tweets were Islamophobic statements and mentions of ISIS, even before anything about the shooter's identity had been confirmed by law enforcement officials. As a result, Twitter users like @AndrianaStark pointed to the hypocrisy that accompanies mass shootings: When shooters are Arab or Muslim, they are considered terrorists, but when they are white, they are considered "lone gunmen" who acted as the result of a mental illness.

It is alarming that multiple Twitter users' first instinct was to link the attack to Islam; indeed, some even went so far as to call for a ban on Islam itself. Of course, these vitriolic responses aren't new. This is, after all, the same country where Donald Trump won a presidential election after threatening to ban Muslims and create a Muslim registry. However, it is critical that we never normalize racist and Islamophobic statement, and that we continue to highlight the hypocrisy that tends to arise in the aftermath of shootings.

Despite the fact that the Florida State Senate is poised to make a decision about Senate Bill 140 — which, if it passed, would repeal laws that currently ban guns on college campuses, airport terminals, and at government meetings — many people seem more focused on their own Islamophobic sentiment than on concrete gun safety measures.

This one tweet about the Ft. Lauderdale airport shooting is both concise and valuable, as it reminds us to reject this double standard:

Many of the replies to this tweet are also Islamophobic, and make nonsensical assertions about Islam and violence. @AndrianaStark went on to tweet about the stereotypes attributed to other people of color and marginalized groups, especially after mass shootings.

@AndrianaStark's point is not a new one. It is an idea that emerges after nearly every mass shooting, in response to Islamophobic and racist rhetoric. Nevertheless, it is a point that continuously needs to be made, because a number of social media users continue to make false claims about Islam in order to advocate for Islamophobic policies.

This tweet should not be controversial, and yet the widespread response to it would seem to imply that it is. White suspects are always humanized in a way that people of color are not. They are accorded an individual identity, rather than perceived as acting on behalf of a group. This point is worth making a million times because in an era when bigotry has been normalized on a federal level, we must move in solidarity with those who are most marginalized.