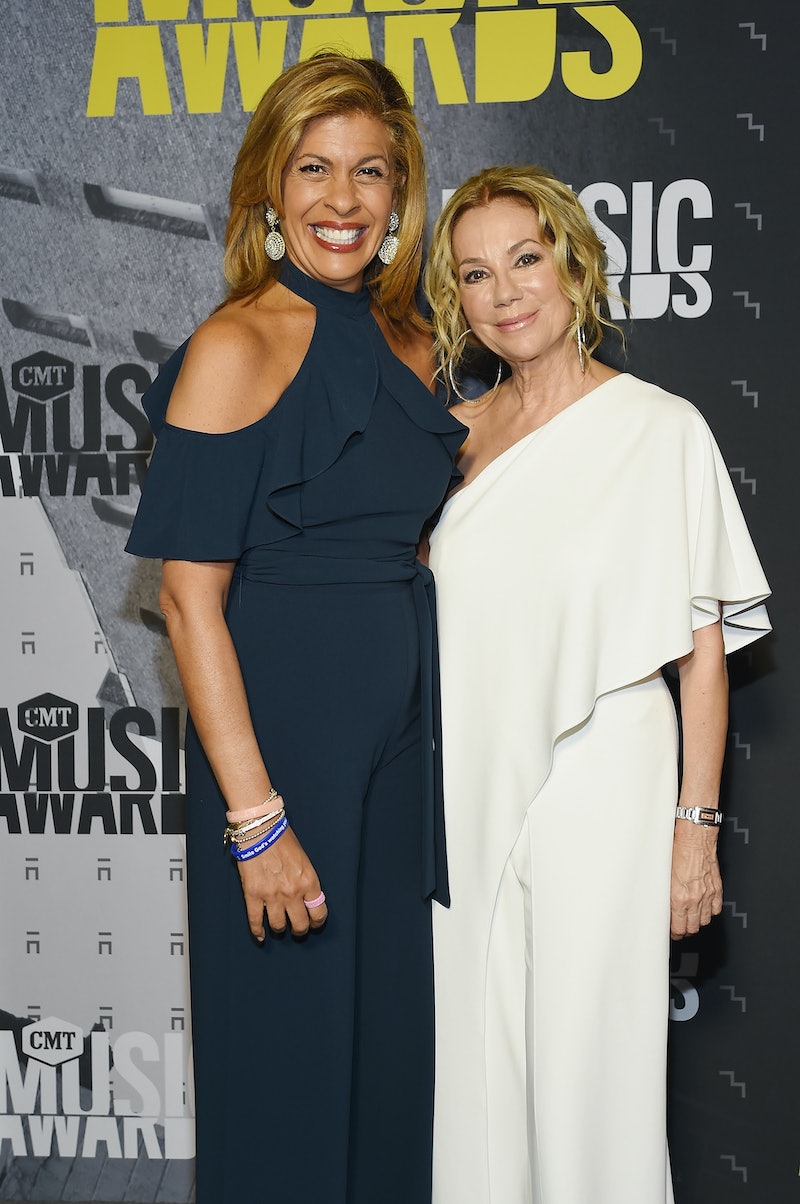 They may no longer co-star on Today Show together, but Kathie Lee Gifford and Hoda Kotb continue to remain the best of friends. A recent photo of Gifford meeting Kotb's newborn daughter is undoubtedly the cutest thing you'll see all day, and if nothing else, it proves that the two former coworkers are still as tight as ever following Gifford's exit from the morning talk show on April 5 of this year. The adorable snapshot, which was shared by Kotb on Instagram, depicts Gifford cradling the new baby, while Kotb tightly hugs her eldest daughter, Haley, in the background.

It's evident that the two women haven't missed a beat since Gifford left the show and have maintained a close bond outside of their working relationship. In her social media photo caption, Kotb gushed, "Lookie who came to say hi!!! Xoxo @kathielgifford love you kath xx."

It was just last month that Kotb made the surprise announcement, shocking theToday Show cast and her many fans watching from home with the news. On April 16, Kotb called in to the show to announce that she had welcomed her second child, Hope Catherine Kotb into her family. During the phone convo, Today Show co-anchor Savannah Guthrie introduced the mom-of-two, asking her, "Do you have something to tell us?" to which Kotb joyously replied, "Yes, I do. It's a girl! And her name is Hope."

There's no doubt that Kotb is overjoyed with her new bundle of joy, who she adopted after her April 12 birth. The morning show host previously adopted her daughter, Haley, in early 2017.

Amidst the Today Show announcement, Dylan Dreyer, who works as a fellow anchor on the morning news program, asked "Hoda, did you ever think that your heart could give more love than you already have given?" Kotb shared,

"You know what's funny? You think that you're full. That's exactly how I felt with Haley and Joel and everything. And Joel and I were standing there when they hand you the baby and it's the closest thing to a live birth I think you'll ever see. But, anyway, in that moment I was like, 'Oh my god, my heart just grew ten times!' I can't believe it's happening, y'all, I really can't."

Kotb's fellow Today Show anchors have been largely supportive of her growing family. Both Savannah Guthrie and Jenna Bush Hager have made visits to see Kotb's new baby girl Hope over the past month. Guthrie revealed that she could hardly wait for a chance to meet the newborn, telling the viewers during a Wednesday, April 17 episode of the show, "Jenna and I went right over, right after the show. I don't even know if we were invited, but we went in and we saw the baby. She added, "She's adorable. Hoda is doing great and is just so happy and pleased. It's really wonderful." Former Today anchor Meredith Vieira also recently paid Hope a visit, according to Today.com "She's so little, she's so beautiful,'' Vieira shared while filling in for Kotb on the fourth hour of the Today Show. "Hoda's in heaven. She's so happy."

After serving as co-hosts on the Today Show for 11 years, Kathie Lee Gifford and Hoda Kotb have certainly seen each other through a lot — and their bond as friends shows no signs of stopping any time soon.