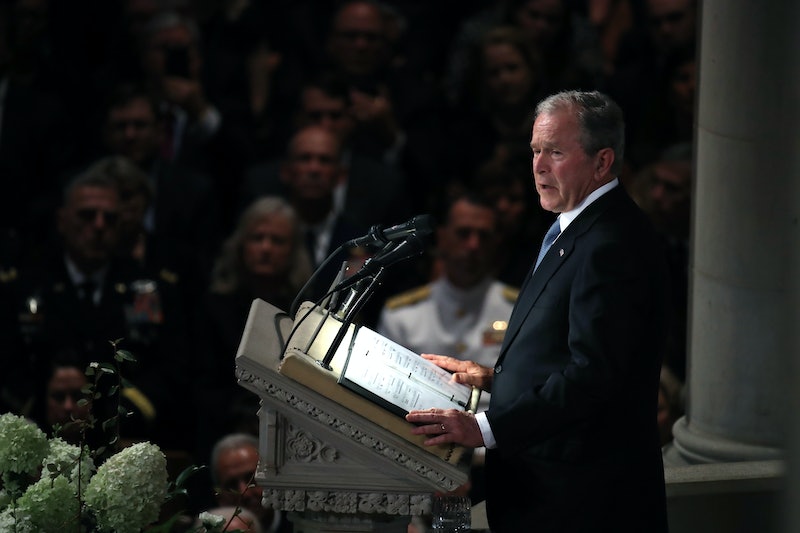 On Saturday, former President George W. Bush eulogized Sen. John McCain, saying the senator's vision should be a guiding light for leaders. Bush used his eulogy to catalog the qualities that made McCain's life worth celebrating, but one quote demonstrates how McCain's life can guide those in power.

"If we are ever tempted to forget who we are, to grow weary of our cause, John's voice will always come as a whisper over our shoulder: We are better than this," Bush said of the late senator. "America is better than this."

Bush said McCain was a forward-thinking man. "John was a restless soul. He really didn't glory in success or wallow in failure, because he was always on to the next thing," Bush told the packed sanctuary at the Washington National Cathedral.

McCain's emphasis on forward motion was evident even in how he wrote his books, Bush added. "A friend said, 'He can't stand to stay in the same experience.' One of his books ended with the words: 'And I moved on.' John has moved on. He would probably not want us to dwell on it," he said.

Bush — who competed with McCain for the 2000 Republican presidential nomination — said "the world is smaller" because of McCain's death. "But we are better for his presence among us. The world is smaller for his departure. And we will remember him as he was: unwavering, undimmed, unequaled."

McCain believed that the country could be better, Bush said during his eulogy. "Those in political power were not exempt. At various points throughout his long career, John confronted policies and practices that he believed were unworthy of his country," Bush said. "To the face of those in authority, John McCain would insist: We are better than this. America is better than this."

Bush's eulogy of McCain also made oblique references to Trump, like the eulogies former President Barack Obama and Meghan McCain delivered earlier in the funeral program. "He was courageous – with a courage that frightened his captors and inspired his countrymen. He was honest, no matter whom it offended," Bush said. "Presidents were not spared."

That last line got a few laughs.

Bush described McCain as "honorable," a lover of freedom, and someone who "respected the dignity" of each life.

But most of all, McCain hated those who abused their positions of authority, according to Bush.

"Perhaps above all, John detested the abuse of power," Bush said. "He could not abide bigots and swaggering despots. There was something deep inside him that made him stand up for the little guy – to speak for forgotten people in forgotten places."

Bush also praised McCain's military service and courage in the face of adversity.