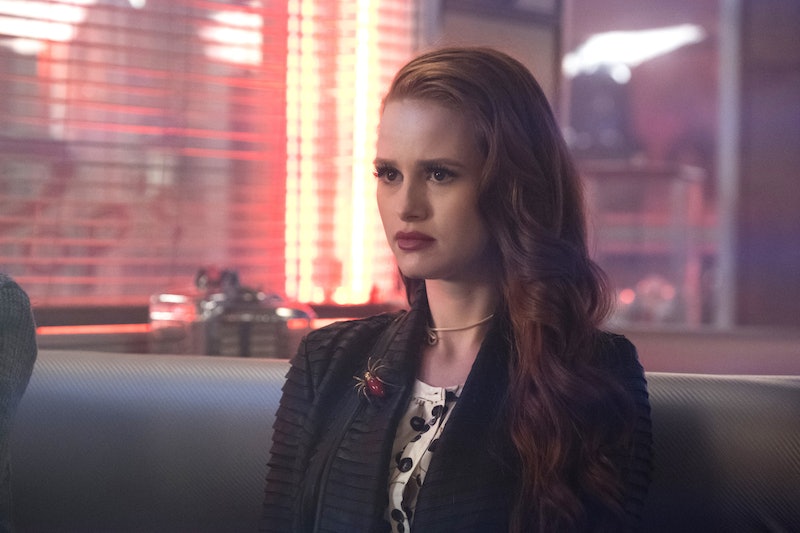 There's been speculation that there's something supernatural lurking in the corners of Riverdale ever since the show began. But the Season 2 premiere may have finally confirmed there's a little magic happening in Archie's world. A new theory from TV Guide writer Kase Wickman suggests Cheryl Blossom is a witch, and the idea isn't as farfetched as it sounds. After all, a Sabrina the Teenage Witch reboot is in the works at The CW from the Riverdale team, and Sabrina Spellman got her start in the Archie comics. It makes sense that Riverdale will be used to introduce the grittier teenage witch — or that some of Archie's pals will visit Sabrina across the river at Greendale at some point. And who better than Cheryl to do the honors? Especially if she's got a gift for casting spells too.

Wickman's theory highlights the moment in the Season 2 Premiere when Cheryl visits an ailing Fred's bedside. Cheryl notices Archie watching her, and says, "You gave me the kiss of life, and now I'm giving it to your dad." She then proceeds to kiss Fred, who later wakes up from his coma. Coincidence? OK, probably, but there's no denying that Cheryl's actions are a bit odd. Her word choice suggests she at least believed she could bring Fred back from the brink of death, and Fred did indeed wake up.

The theory goes on to point out that Cheryl's outfit features a red broach in the same spot where Fred was shot. This could be nothing more than a clever sartorial choice from Cheryl, or it could be a sign that she performed some sort of spell in order to save Archie's father. Maybe Cheryl even rowed across the river to Greendale to ask Sabrina for a bit of advice on how to keep someone among the living through magical means.

Sabrina could show up on Riverdale before the reboot launches, and if Cheryl is dabbling with magic, she could be the key to the beloved character's introduction. After all, this isn't the first time a connection between Cheryl and Greendale has been hinted at. Jason and Cheryl were rowing across Sweetwater River, so that Jason could flee to the town on the other side — that town is Greendale.

"There definitely will be a big genre element to Season 2. It won’t suddenly just be a coming-of-age drama. There will definitely be a very strong, bold genre statement."

Adding Sabrina to the mix would definitely add a genre vibe to the show, and so would the reveal that Cheryl herself is no stranger to the world of magic.

Even the fact that Cheryl is a twin could be significant. The TV Guide article points out that in the '90s version of Sabrina, all the members of the Spellman family have a twin. Maybe Cheryl and Jason are related to Sabrina's family, which would give the Blossom twins a real magical connection to go along with their preternaturally strong twin bond.

Back in Season 1, Cheryl had a nightmare about her dead brother that seemed to come straight out of a Gothic novel. Perhaps her dream was more than it appeared. Maybe Jason was truly reaching out from beyond the grave. Face it, if anyone on Riverdale is going to try to make contact with the dead, it's going to be Cheryl.

So far, Riverdale has kept all of the magic confined out of sight across the river, but with a Sabrina series happening, there is a real possibility that a dash of the supernatural with arrive in Archie's world in Season 2. If that hospital scene between Fred and Cheryl is any indication of what's to come, then don't be surprised if Cheryl and Sabrina end up hanging out at some point.

Even if Cheryl isn't a witch, she still needs to spend some time with Sabrina, because these two queens join forces one of these days.