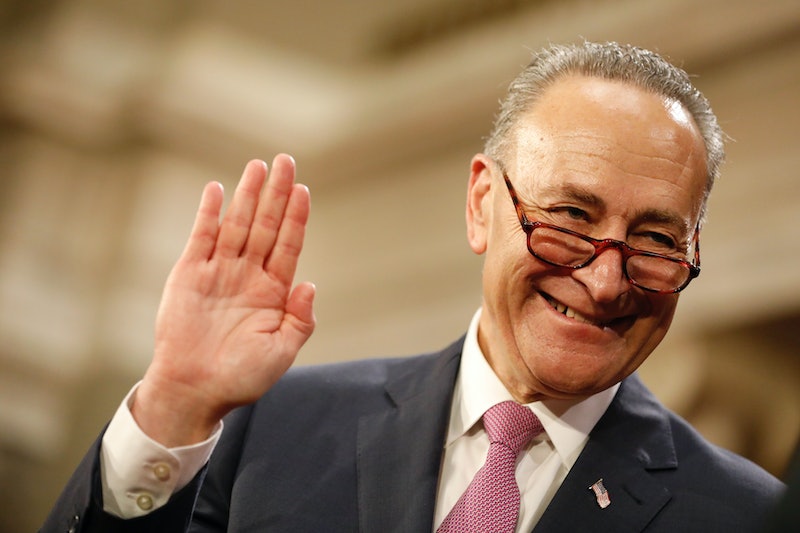 "Our requests are eminently reasonable, shared by leaders of both parties," Schumer said in a tweet posted alongside a copy of the slightly modified letter. "I'll return this letter to @SenateMajLdr with the same requests."

Using what appears to have been a black Sharpie, Sen. Schumer made only a few minor changes to McConnell's letter. None of the changes altered the letter's original message, which demands a series of standards be met before any Cabinet nominee comes before the Senate. Rather, Schumer simply crossed out the word "Republican" in the letterhead and replaced it with "Democratic." He also crossed out two references to Reid, replacing them with McConnell's name, and nixed McConnell's signature at the end of the letter before adding his own in the margin.

Sen. Schumer's letter (or is it Sen. McConnell's letter?) is meant to serve as a warning to Congressional Republicans following federal ethics watchdogs' concerns over how Republicans were handling confirmation hearings for Trump's Cabinet nominees. In a letter sent to Senate Democrats on Jan. 7, Walter Shaub Jr., the director of the Office of Government Ethics, warned the schedule of Cabinet confirmation hearings was creating "undue pressure on OGE's staff and agency ethics officials to rush through these important reviews," CBS News reported.

According to Shaub, the schedule "left some of the nominees with potentially unknown or unresolved ethics issues shortly before their scheduled hearings." Several Cabinet nominees had not yet completed the OGE's full ethics review, while the agency had not received "even initial draft financial disclosure reports" from some other nominees, Shaub expressed.

Whether McConnell, whose legacy of obstructionist policies is impressive, will be swayed by his own words remains to be seen. He appeared dismissive of Democrats' concerns over the confirmation process for Trump's Cabinet nominees over the weekend, blaming it on their inability to accept the fact they lost. "All of these little procedural complaints are related to their frustration at having not only lost the White House, but having lost the Senate," Sen. McConnell said Sunday in an interview on CBS’s Face The Nation. "I understand that. But we need to, sort of, grow up here and get past that."

In using McConnell's own words to call on Republicans to follow the same set of standards they demanded of Democrats during hearings for President Obama's nominees in 2009, Sen. Schumer has sent a pointed message about asking of others what you're not willing to do yourself.