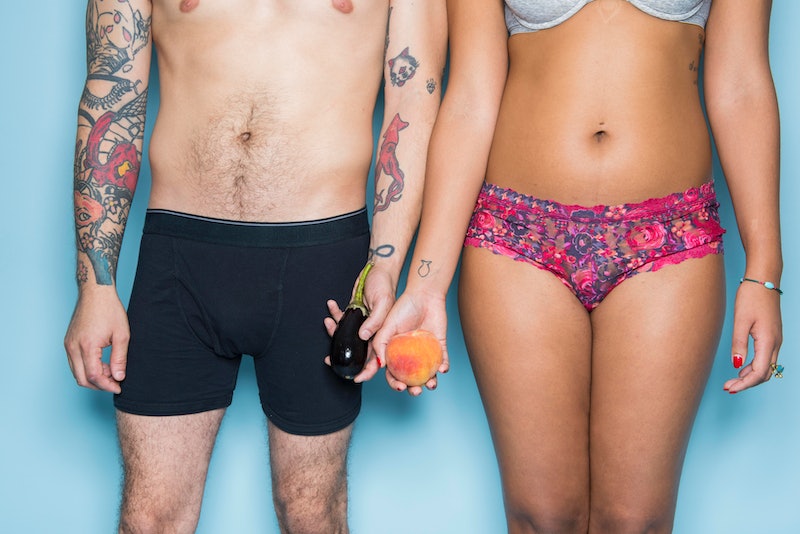 When I first learned that the clitoris was like a little penis, I felt empowered. After being taught that the penis was the sexual organ of all sexual organs, I no longer felt like I was missing out on the desire and pleasure cis men were afforded. But there are also problems with this analogy, according to sex educator Mal Harrison. That's why she's behind a Change.org petition to change the United States National Library of Medicine’s (MeSH) definition of the clitoris.

The MeSH definition currently reads, "Clitoris: An erectile structure homologous with the penis, situated beneath the anterior labial commissure, partially hidden between the anterior ends of the labia minora." Which sounds straightforward enough, until you wonder: What other body part do we literally define in terms of someone else's? Would we ever hear the male nipples defined as "homologous with the female breasts"? As the petition points out, the MeSH doesn't define the penis as homologous to the clitoris.

"I know there was a time when the masses of society believed all women came from the rib of Adam, but all men today come from the vagina," Harrison tells Bustle. "Framing a woman’s sexual organs within the context of a man denies a woman the right to own her body and sexuality independent of men."

If hearing my body described like a male one was empowering, that's probably because our society considers male bodies the only legitimate ones. The female body's existence as a source of pleasure, strength, or really anything except visual beauty has been largely erased from the media and medical knowledge. Heck, we don't even always put the clitoris in textbooks. Imagine if half of anatomy books just omitted the penis! It's no wonder we get the message that our own organs are inferior.

Rather than address this inferiority complex by reassuring clitoris-owners that they have something like a penis, Harrison wants to make it clear that the clitoris is a wonderful, powerful organ in its own right.

There's also a scientific reason to make this change. Biologically, it would be more accurate to say the penis is like the clitoris, the petition points out. Until we've been in the womb for 6-12 weeks, we start off with an organ that's far more like a clitoris. Plus, the current definition only describes the external clitoris, neglecting its internal structure, says Harrison.

The last reason the petition lists is one that many people might not think of. Some cultures that practice female genital mutilation say that the clitoris needs to be removed because it's masculine. By comparing the clitoris to the penis, we risk validating their reasoning.

Harrison is hoping the MeSH deletes penis comparisons from their clitoris definition — or at least adds clitoris comparisons to their penis definition — and puts the clitoris under its "female internal genitalia" category along with its "female external genitalia" one. It would be even better, she says, if the clitoris's definition could include "the only organ to exist solely for pleasure." That is a scientific fact, after all, and it's one we deserve to know.