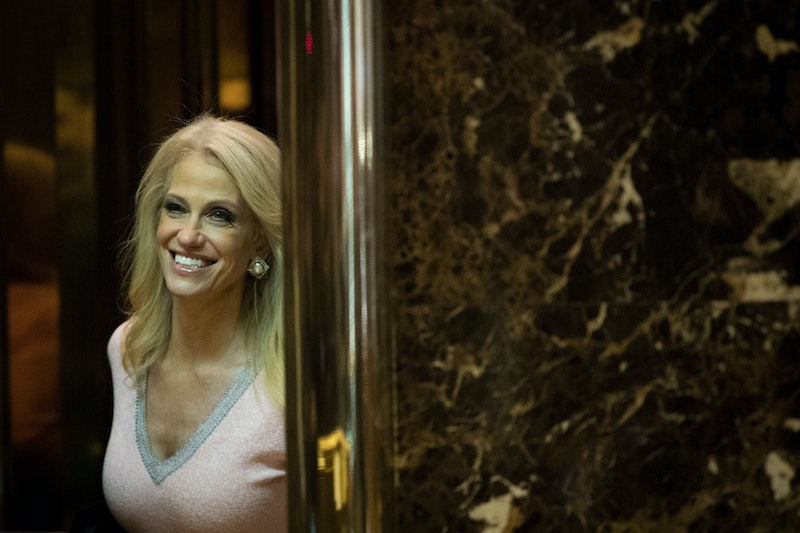 If it wasn't clear already, Kellyanne Conway may be even better at avoiding the topic at hand than Donald Trump. The president-elect has an uncanny ability to answer any question with a question, or if that doesn't work, just changing the topic, and then later insisting that he didn't do any of those things. But he may have met his match with the former pollster and soon-to-be White House adviser. Conway seems to deflect automatically and with zero shame. This tweet says it all, and it's definitely something to keep in mind when watching any Kellyanne Conway interview ever.

Twitter's JoeMyGod summed up how Conway interviews all go down:

"Any news anchor" will ask, "How about this terrible thing Trump did?" And then Conway will respond, "Wait, why aren't we talking about this totally unrelated thing?"

He's totally right. It doesn't matter the channel — Conway's not going to address the topic at hand.

This is exactly what happened on Monday when Conway did a tour of the morning news shows to defend Trump's Twitter takedown of Meryl Streep. Streep gave a speech at the Golden Globes Sunday in which she criticized Trump's bullying attitude, in particular the way he mocked a reporter with disabilities. The news anchors on Fox & Friends put Trump's tweets about Streep, in which he called her "over-rated" and a "Hillary flunky" up on the screen. Then they asked Conway for her reaction.

She did pretty much exactly what JoeMyGod summarizes. Here's what she what she said to Fox & Friends co-host Ainsley Earhardt when asked about Trump's tweets:

I'm glad Meryl Streep has such a passion for the disabled, because I didn't hear her weigh in, or I didn't even hear her use her platform last night, Ainsley, to give the shout-out to the mentally challenged boy who last week was tortured live on Facebook for half an hour by four young African-American adults who were screaming racial and anti-Trump expletives and forcing him to put his head in toilet water.

That's an extreme pivot, if you ask me. And it's not random. She tried the exact same thing on CNN's New Day, but it didn't work. After talking about the Russia hacks and the Republicans' indifference, Conway actually brought up the whole issue of Streep's speech, starting in immediately on her talking point about the Facebook Live kidnapping. But the co-host, Chris Cuomo, didn't let her.

So then she tried a different tactic, denying that Trump had ever made fun of a reporter with disabilities — even though video of it exists. "Why can't you give him the benefit of the doubt?" Conway asked Cuomo. "You can't give him the benefit of the doubt on this and he's telling you what was in his heart? You always want to go by what's come out of his mouth rather than look at what's in his heart."

Well, if they pivot every comment, policy decision, and conflict of interest to "what's in his heart," the president-elect might as well not give another press conference for the next four years. Instead, he should consider releasing a painting each month that shows his feelings on the main topics facing the country. Or however else he emotes what's in there, deep down.

That's unacceptable for a president, and it's unacceptable for his main advisers. The leader of a country and his team should be able to take responsibility for their actions and not lash out at anyone who thinks to criticize the administration or the man.

But given what we've seen so far, be prepared for more Kellyanne Conway interviews just like these.