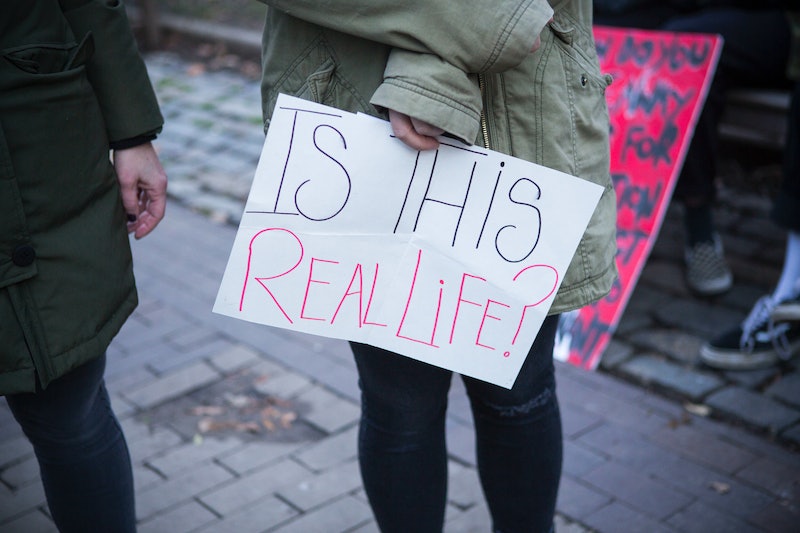 Although there is a temporary ban on all refugees entering the country under President Donald Trump's executive order, which went into effect on Friday, is undeniably targeting Muslims. Trump has long held that Muslims present a credible threat to our national security—on the campaign trail he floated the idea of a ban on Muslims entering the country and creating a registry of Muslims living in the U.S. But this statistic about the number of murders in the United States at the hands of Muslim terrorists will immediately shut down any argument about the necessity of Trump's refugee ban.

Trump's executive order has immediately sent ripple effects across the globe. People who were airborne on Friday, expecting to arrive in the United States for safe haven or to reunite with their families, have been detained. The order denies entry of refugees from any country for 120 days, along with the indefinite ban on Syrian refugees. Additionally, it bars people from seven predominantly Muslim countries — Iran, Iraq, Libya, Somalia, Sudan, Syria and Yemen — from entering the country for 90 days.

All of this is part of Trump's idea that he is protecting our country from what he sees as the imminent arrival of radical Muslims. "I am establishing new vetting measures to keep radical Islamic terrorists out of the United States of America," Trump said as he signed the order at the Pentagon. "We don't want them here."

Setting aside the obvious and disgusting xenophobia exhibited by our president, this line of thought has some pretty big flaws. A new study released by Duke University sociologist Charles Kurzman rounds up the data on the number of murders carried out by Muslim extremists, the eighth annual report on Muslim-American terrorism put out by the Triangle Center on Terrorism and Homeland Security. And guess what? It's astonishingly low. Out of the 240,000 Americans who have been murdered since the attacks on the Twin Towers in 2001, 123 of those deaths were linked to Muslim-American extremists. In other words, .05123 percent of the murders in the United States in a sixteen year period were carried out in the name of radical Islam.

The study rounds up a lot of other interesting tidbits that show, 100 percent, that America is not under threat of domestic terrorism like Trump wants you to believe, nor will his ban on Muslims solve anything. In 2016, 46 of Muslim-Americans were associated with violent extremism. Out of those 46, only 9 people had family backgrounds from the countries that Trump has blacklisted for 90 days. Additionally, according to the study, there have been "no fatalities in the United States caused by extremists with family backgrounds in these countries."

"It is flatly untrue that America is deeply threatened by violent extremism by Muslim-Americans," David Schanzer, director of the Triangle Center on Terrorism and Homeland Security, said in a statement. "Attacks by Muslims accounted for only one third of one percent of all murders in America last year."

In other words, there is absolutely no evidence that this new order, which is essentially a ban on Muslims entering the United States, does anything but promote xenophobia and hate.