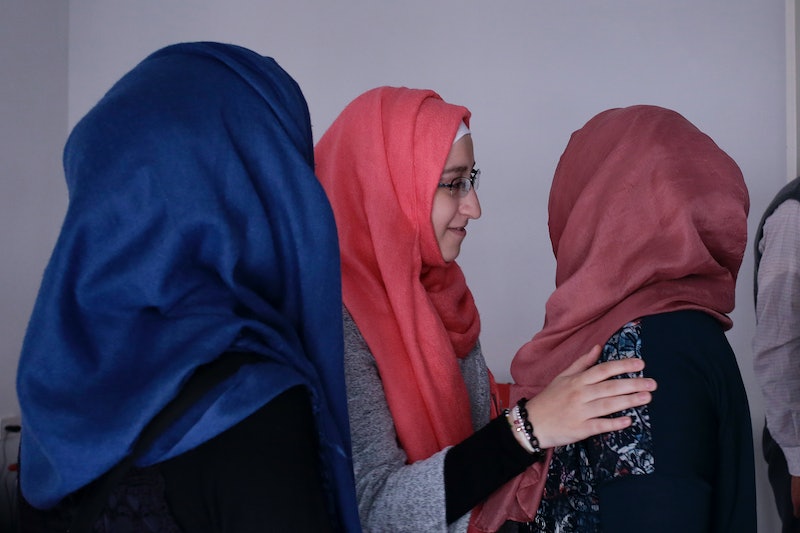 One would hope that banning the entry of refugees seeking respite from a civil war would be widely rejected as an inhumane concept. Unfortunately, there are still people who support President Donald Trump's executive order, which indefinitely bars Syrian refugees from entering the country under the guise of "safety." The catch is, most Syrian refugees are women and children. That statistic potentially throws a real wrench in the defense that Syrian refugees are dangerous, or potentially pose a threat to American safety.

What this means is that 73 percent of the Syrian refugees coming to the U.S. were women and children in the year 2016. Now, when entering Trump's line of thinking, it's worth considering that women and children could still hypothetically present a threat.

In fact, an active awareness of the hypothetical threat of women and children was used as a defense in a press briefing, when the White House press secretary Sean Spicer claimed a five-year-old boy detained in Dulles International Airport could have posed a threat to safety. While speaking at the daily press briefing on Monday, Spicer defended the detainment of the five-year-old boy, saying:

This statistic about how the majority of Syrian refugees coming into the United States are women and children is, arguably, even more powerful because it flies in the face of a narrative Trump espoused during his campaign. In an interview with George Stephanopolous on This Week back in October 2015, Trump claimed Syrian refugees are mostly men, citing his perceived lack of women and children with equal parts suspicion and concern:

In a world of consistency, Trump might take comfort in the fact that women and children make up the majority of Syrian refugees in the U.S. However, thus far, this information has not seemed to sway Trump's approach to refugees.

Following public backlash against the implementation of Trump's block against Syrian refugees and nationwide protests against the other travel restrictions in the executive order, the president made it abundantly clear that he is standing by his policy.

Again, in Trump's mind, does the term "a lot of bad 'dudes'" apply to children under 14 and women? Apparently, it does.